Bengtson, Honduras Pushed To The Brink In Group E

It was another tough result for Jerry Bengtson and Honduras, dropping their second game in a row at the World Cup to Ecuador 2-1, all but facing elimination at the bottom of Group E.

Share All sharing options for: Bengtson, Honduras Pushed To The Brink In Group E

New England Revolution striker Jerry Bengtson played all ninety minutes for Honduras who lost 2-1 to Ecuador in their second match in Group E.

Bengtson's strike partner Carlo Costly ended a 510-minute goalless streak at the World Cup dating back to 1982 by firing home in the 31st minute to give Los Catrachos the lead. Honduras failed to score in three games at the 2010 World Cup in South Africa. 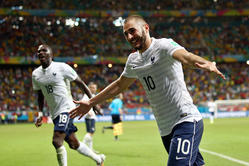 Need some more info on everything in Group E? Jake's got you covered as he continues his preview series of each World Cup group.

The biggest moment for Bengtson came in first half stoppage time, where he was judge to have intentionally handled a ball into the net. Replays show that Bengtson was in an offside position but the assistant never raised the flag and likely handled the ball on a rebound off the post. Bengtson was issued a yellow card for the play.

Bengston recorded two shots, one on goal, and was 17 of 22 in distribution, mostly in the midfield third. Costly had a lot of difficulties in the final third with his distribution and wingers Roger Espinoza and Oscar Boniek Garcia didn't have a lot of opportunities to get the ball into the box although Costly's goal was the result of a long ball over the top.

Ecuador's Enner Valencia scored twice, equalizing only minutes after Honduras' opener in the 34th and scoring the winner in the 65th. The win puts Ecuador in second place in Group E with three points, ahead of Switzerland on goal difference. The Swiss defeated Ecuador 2-1 in the opening game but lost 2-5 to France earlier today.

In order for Honduras to advance out of the group, they will have to defeat Switzerland on June 25th and hope that France defeats Ecuador and in the process make up the four goals difference between the two sides.