Costa Rica, Colombia and Netherlands have impressed so far while Spain, Portugal and Cameroon have been disappointing.

We've officially been subjected to a week full of World Cup soccer. We've been inspired by the United States' win over Ghana, shocked by Spain's lethargic performances against Netherlands and Chile and lulled to sleep by anything involving Greece. Now that we've had a look at every team in the tournament, let's see which countries have impressed and which have disappointed.

1. Costa Rica-Expectations weren't high for Costa Rica when they arrived in Brazil, but the Latin American country has turned heads with wins over Uruguay and Italy. Joel Campbell has been an absolute nuisance to opposing defenses while Brian Ruiz and Junior Diaz have also been sharp offensively. Head coach Jorge Luis Pinto deserves a lot of credit for orchestrating these historic victories, and he could have more in store. 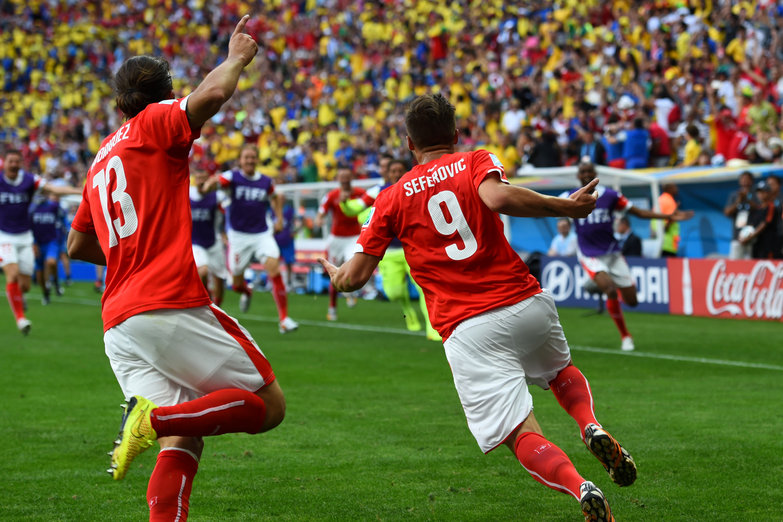 Soccer is beautiful in many ways, and the Swiss showed all of them against Ecuador.

2. Colombia-Sure, it's a weak group, but Colombia has done well to collect positive results against Greece and the Ivory Coast. James Rodriguez has led the charge for the Coffee Growers with a goal in each game while Juan Cuadrado has been a great setup man. Both wins have been entertaining and convincing, which makes you wonder how far this team can go.

3. Netherlands-Netherlands opened their World Cup play with an impressive 5-1 victory over Spain. The quality of passing exhibited by the Dutch was mesmerizing as it looked like they were toying with the reigning champions. Robbie van Persie and Arjen Robben each had a brace in that game while adding single tallies in their next match against Australia. The second match was less convincing since the Netherlands were actually losing 2-1 to the Socceroos at one point, but the team showed great resolve to grind out a 3-2 victory. Netherlands have already advanced, but still have to a group play meeting with Chile, another team that has impressed.

1. Spain-Spain has officially been eliminated from the tournament after disappointing performances against the Netherlands and Chile. La Roja have looked uninspired, which is a far cry from the team that recently won the World Cup and two UEFA European Championships. Iker Casillas has been dreadful in goal, Andres Iniesta has looked old and Diego Costa has been a non-factor. The legacy of this team will take a dip because of this World Cup.

2. Portugal-We knew that Germany was going to be good, but we didn't know that Portugal was going to be bad. The Portuguese opened World Cup play by being steamrolled by the Germans 4-0. Cristiano Ronaldo, winner of the FIFA Ballon d'Or, was invisible throughout the match, which greatly hurt Portugal's attack. Perhaps nothing showcases Portugal's fall more than the fact that some pundits are saying that the United States are the favorites heading into Sunday's clash. There's still a lot of tournament left to play for Portugal, but expectations have been lowered.

3. Cameroon-Cameroon wasn't exactly a soccer powerhouse heading into the World Cup, but their stock drops because of their despicable performance against Croatia. In their first game of the tournament, Cameroon held Mexico to a respectable 1-0 result, which was at least partially influenced by the referee. In their second game, Cameroon imploded. After conceding an early goal in the 11th minute, Cameroon's chances of winning decreased significantly when Alex Song was ejected for taking a swipe at a player. The African country went on to lose 4-0, confirming that they would bow out early.