Is Clint Dempsey the Best American-Born Player Ever?

Clint Dempsey became the only American player to score in three World Cups when he added a tally against Ghana. The goal, which was the fastest for the US at a World Cup, is only part of the reason why captain might be the best American player ever.

Share All sharing options for: Is Clint Dempsey the Best American-Born Player Ever?

Clint Dempsey has done what no other American player has done before: he has scored in three World Cups. The United States Captain only took 34 seconds to find the back of the net against Ghana on Monday. It was the fastest World Cup goal in U.S. history and the sixth-fastest in tournament history. It could also make Dempsey the best American player of all time.

DaMarcus Beasley initiated the goal with a quick throw-in to Dempsey. The Seattle Sounders player swiftly got the ball back to his compatriot before making a forward run. Beasley found Jermaine Jones, who made a forward pass to Dempsey. Dribbling magic allowed Dempsey to beat John Boye before putting a left footed shot past goalkeeper Adam Kwarasey. 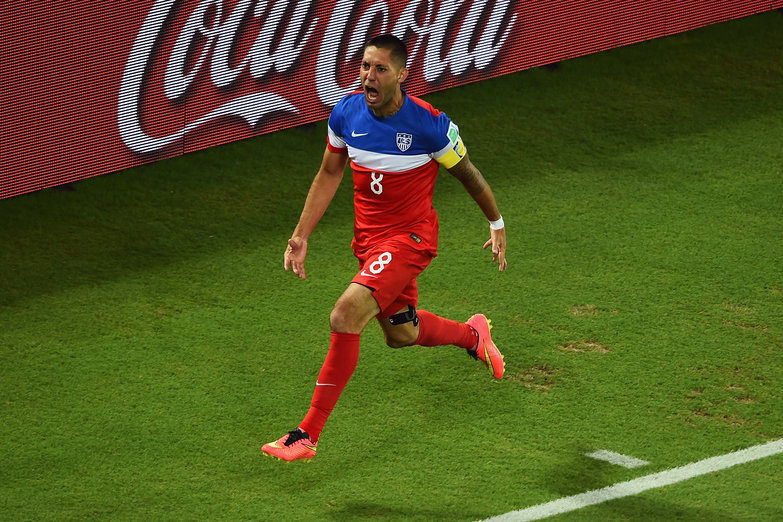 The US beat Ghana and made history on several fronts, but also suffered two major injuries and left some question marks.

The goal only adds to Dempsey's impressive resume.

The Texas native started his professional career with the New England Revolution in 2004. In his first year, Dempsey collected seven goals and one assist to be named MLS Rookie of the Year. He increased these numbers in 2005 by amassing ten goals and nine assists.

Dempsey caught the attention of US men's national team coach Bruce Arena and was named to 2006 World Cup squad. His equalizing goal against Ghana became iconic as it was the only tally recorded by an American player in the tournament.

Dempsey's World Cup success led to a $4 million dollar transfer to Fulham FC in December 2006. Dempsey made 213 appearances for Fulham and Tottenham over the course of seven years. His 57 goals set the record for most scored by an American in the EPL. In 2012, Dempsey finished fourth in the EPL Player of the Year voting.

A lackluster season with Tottenham helped convince Dempsey to return stateside as he signed with the Sounders on August 3, 2013. The Designated Player struggled during his inaugural half-season in Seattle and continued his poor form during a loan spell with Fulham. He caught fire, however, during the 2014 season. Dempsey has collected eight goals and three assists in nine appearances before leaving to join the national team.

The 2014 World Cup is Dempsey's third, as he also appeared in the 2006 and 2010 tournaments. Dempsey scored the first American goal of the 2010 World Cup when English goalkeeper Robert Green committed a major error.

Dempsey was part of the Revolution when they made trips to the MLS Cup Final in 2005 and 2006. In Europe, Dempsey helped Fulham become the runners-up of the 2009-2010 UEFA Europa League. Internationally, Dempsey was there when the US won the CONCACAF Gold Cup in 2005 and 2007.

Individually, Dempsey has been named to the MLS Best XI twice (2005 and 2006) while also being a three time US Soccer Athlete of the Year (2007, 2011 and 2012). In 2009, he collected the FIFA Confederations Cup Bronze Ball, which recognized him as the third best player at the tournament.

With such an impressive resume, which includes 39 international goals, it has to be asked if Dempsey is the best American player of all time.