Spain! Netherlands! It's a rematch of the 2010 World Cup Final! And it's the third overall game in the tournament?! The soccer gods are very kind today to soccer fans, but will they be kind to let both Spain and the Netherlands out of Group B or will Chile and Australia play spoiler to one of the 2010 finalists.

Share All sharing options for: 2014 World Cup: Group B Primer

Group B might not be a true Group of Death, Australia isn't exactly a power house. But between Spain, Netherlands and Chile, a pretty good team is going home early, and since I picked Spain in my bracket and have a 2010 finalist not making it into the knockout stages, I might be secretly rooting for Chile. 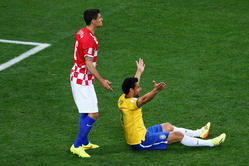 Brazil might have won their first game over Croatia, but Seth says that diving will continue to be a turnoff to the casual fan.

For just the second time, Australia qualified as part of the Asian confederation, the first being 2010 after switching in 2006 from Oceanic region. The Socceroos easily handled their first round of games, the AFC's third round, by toping Group D with Oman, Saudi Arabia and Thailand winning five of their six games.

In the fourth round, pitted against Japan, Jordan, Oman and Iraq, Australia was far from dominant. But two 1-1 draws with Japan, who finished top of the group and a late goal in their final match against Iraq sealed a 1-0 win and three points, the exact margin Australia finished ahead of Jordan for second place.

PLAYER YOU SHOULD KNOW: Mile Jedinak, MID, Crystal Palace (ENG) - Other than Tim Cahill, Jedinak is probably Australia's highest profile player going into this World Cup. Jedinak is a workhorse, and played nearly every minute of the 2013-14 EPL season with Palace save for a second half injury in a game vs. Fulham.

PLAYERS WHO NEEDS TO BE HUGE: GKs Matthew Ryan, Mitchell Langerak, Eugene Galekovic - Mark Schwarzer is not walking through that door, but at the 41 year old long time EPL keeper could still be the best keeper in the country. Galekovic at age 33 is the veteran but only has 8 caps while the youngsters Ryan (age 22, 7 caps) and Langerak (age 25, 3 caps) will have to provide the leadership and spark to guide Australia out of a fairly tough group.

I think at best, Australia is playing spoiler in this group, because I can't expect this team to make the group stage. I think they'll play capably, but at the end of the day this is a very young squad especially in defense and keeper. Cahill, Jedinak and veteran Mark Bresciano will cause some trouble for teams in the attacking half and will prove dangerous on the counter. But with such inexperience up and down the roster internationally, a disappointing 0-3 record could be on the horizon for the Socceroos.

Qualifying in South America is a long, home-and-away round robin tournament that is usually difficult even with Brazil automatically qualified as hosts. Chile won the same number of games, nine, as top two finishers Argentina and Columbia, but struggled against their fellow World Cup qualifiers.

Against the four teams going to the World Cup, Argentina, Columbia, Ecuador and Uruguay, Chile compiled a 2W-1D-5L record and a 7-1 record against the non-qualifiers in Venezuela, Peru, Bolivia and Paraguay.

PLAYER YOU SHOULD KNOW: Arturo Vidal, MID, Juventus (ITA) - If you rarely get a chance to see Serie A, spend a few games watching Vidal. He might be the best box-to-box center midfielder in the world, and recently was declared fit after an injury scare, meaning Chile won't be down their best player.

PLAYER WHO NEEDS TO BE HUGE: Alexis Sanchez, ST, Barcelona (ESP) - He scored four times during qualification but arguably will need to be even better to guide Chile out of the group. He scores one goal for every three international games (66 caps, 22 goals) but even that strike rate might not be good enough to get past Spain and the Netherlands.

I'm not going to lie, I like Chile. I like the way the play, much more team orientated than most of the top South American teams I think, more European or even North American style. But these guys are good, and it shouldn't be a shock if they make it out of the group. In fact, I think they do just that, and they might even beat the Netherlands in the process. Either way, a potential knockout round game vs. Brazil looms, meaning Chile could face three of the world's best teams in four games if they make it that far. 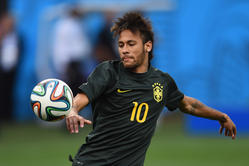 Didn't read our Group A primer? Don't worry, Jake's got you covered before you sit down and watch Mexico-Cameroon at noon.

The Netherlands rolled through qualifying, amassing an undefeated 9-0-1 record with 34 goals scored to only 5 goals allowed. Drawn against Romania, Hungary, Turkey, Estonia and Andorra, the Dutch were paced by 11 goals from striker Robin van Persie. They finished nine points clear of Romania for second place and scored at least two goals in every qualifier.

PLAYER YOU SHOULD KNOW: Arjen Robben, MID, Bayern Munich (GER) - The playmaking winger has played for top teams in England, Spain and Germany in his club career, including the 2012-13 UEFA Champions League title with Bayern Munich. His strike rate in Munich is staggering, with 56 goals in 106 games.

PLAYER WHO NEEDS TO BE HUGE: Robin van Persie, ST, Manchester United (ENG) - When he's healthy, he's one of the best strikers in the world. It was an injury plagued club season, but he's scored twice in their send-off games and if he's getting back into form, that's bad news for the rest of the world, let alone Group B

Probably unlucky that they get drawn against Spain and have to play them in their first game. A loss would put them on their heels for the remaining two games against Australia and Chile. Their defense is very young, Ron Vlaar from Aston Villa is the reigning backline veteran with just 24 caps. A solid goalkeeping corps of Michel Vorm and Tim Krul who both play in the EPL with Jasper Cillessen from famed Dutch club Ajax are more than capable but if you're looking for a bit of a shock exit from the group stages, might not be a bad place to start here.

Paired with France in qualification, Group I is the only European qualifying group that has five teams. It was always going to be a two-horse race between France and Spain, and the group was decided on March 26, 2013 in France with Spain winning 1-0 on the road following a 1-1 draw four days earlier in Spain.

PLAYERS YOU SHOULD KNOW: Everyone - Seriously, this team is stacked. If you put Spain's "B" team into European qualifying odds are they could get to a playoff bid.

PLAYER WHO NEEDS TO BE HUGE: Sergio Ramos, DEF, Real Madrid - We all know he's a dangerous guy in front of goal on set pieces, just go back and watch the Champions League final from last month. But it's his defense that needs come up big if Spain is going to repeat, because I remember him, quite fondly, as the guy Clint Dempsey pickpocketed in the 2009 Confederations Cup.

It's hard to believe that the two-time European Champions and defending World Cup champions had never made it to the semi-finals of the World Cup before Germany 2006, let alone won it. Their international form has been second to none in continental competitions and aside from a 3-0 loss to Brazil in the Confederations Cup final, they win every major tournament they play in. Anything less than the finals, and a potential rematch with Brazil, would be disappointing.

I'm sorry, a rematch of the 2010 World Cup Final is the third game of the entire tournament. I don't need to repeat myself, ditch work at 2:30PM and go watch this game.

MOST IMPORTANT GAME - Netherlands vs. Chile

This probably going to decide which team gets second place in the group, If Spain has beaten both teams heading into this game, goal-difference will be a factor so one team could be playing for a draw but I think either way three points in this game likely means survival in the group stage.

Why go against the reigning runner-up in the World Cup? Because I like Chile and I think the injury to Dutch midfielder Kevin Strootman will loom large for the Netherlands against Spain and Chile. Could I be very wrong about this? Absolutely. I wouldn't be shocked it Spain and Netherlands tied in the opener and then won their final two games and settled their identical 2-0-1 records on goal difference. Also, it's no fun to just go "chalk" in every bracket.