Today's Games: Cameroon and Mexico face off at noon, followed by a rematch of the 2010 World Cup final at 3 PM ET between Spain and the Netherlands, and the day finishes with Chile vs. Australia at 6 PM.

Good day to all of you and welcome to day two of that which is most glorious above all things in soccer, the World Cup. Yesterday had goal and controversy aplenty, so let's hope that the rest of the group stage will turn out with that kind of excitement, instead of the miserable slog of over-cautious play we saw through most of the group stage in South Africa in 2010.

As I explained yesterday, we will open this thread to discussion before kick-off of the first match, and it will remain open and on the front page all day. During all three matches today, stop in and discuss the action as you're watching, touch base with us and your fellow readers, and just be generally social. 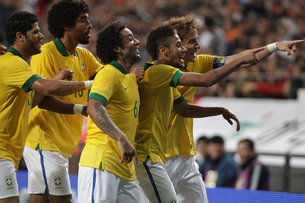 Cameroon vs. Mexico, 12 PM ET - If you're American, or a fan of the USA, you probably hate Mexico. That's about as far as any rational relationship between Revs/New England fans and this match is gonna go. Of course, you could argue that a couple players on either squad would be feasible, possibly higher-end transfer targets for the New England Revolution, but as far as I know, none have been linked recently.

Spain vs. Netherlands, 3 PM ET - A rematch of 2010's final, you should want to watch this just because you love soccer. I doubt there are too many players in this match with any rational relationship to the Revs, either, but like I said, you should want to watch this for the fun of it. It'll be interesting to see who wins out, given that Holland's defense is about as solid as Swiss cheese (with about the same soccer IQ), but Spain's core is so old you can hear their joints creak through the telecast. Seriously, Xavi may have to stop and take a nap midway through the second half. I hope he brought his denture cream.

Chile vs. Australia, 6 PM ET - This might be the most interesting or most boring match of the day. Really no way to tell. Where Cameroon-Mexico will be fun because we hate El Tri, and Spain-Netherlands is awesome because of the last Final, this one is totally out of whack. No one expects Australia to do anything, whereas Chile are expected to compete for the second spot in the group. That said, Australia is young and fearless, and Chile is somewhat unknown. So either Australia bunkers in and makes this ugly as heck, or Chile goes HAM and rips the Socceroos apart. Or, a third (awesome) possibility is that Australia attacks with abandon, as does Chile, and we watch a SPECTACLE. Let's hope for the third. Also, hey, maybe some of these players are guys the Revs can look at.

I hate to disappoint, but I'll probably be mostly sober, at least until the last game. At that time I might swing by the liquor store and just grab something quick. I'll be sure to let you guys know what I procure. Sorry, I know, I'm in my Kaplan Bar Prep class till 3:30 watching on an iPad. Give this one a 1 out of 5 beers score.

Games one and three are on ESPN2, while Spain-Netherlands is on ESPN for all of us in the English-speaking world. I believe Spanish-language can all be found on Univision or its affiliates. Again, check out LivesoccerTV to double-check in your area.