This is it, you've waited four years for this very day. This is the biggest day in all of international soccer - the start of the 2014 World Cup. So here's some information you'll need for the next few weeks on all the teams in Group A.

There's nothing better than this. Frantically researching as much information as you can, watching highlights and listening to talking heads debate how far each team will go in the World Cup.

I'd like to say that I'm an expert at all things related to the World Cup, but I'm not. So instead, for your reading pleasure I have complied a list of important information that will aid you during the World Cup and we'll be rolling them out as each group begins play in the World Cup.

Simple things like nicknames, coaches, TV schedules and names you should already know and even a few you (and certainly I) have rarely heard of but over the next few weeks we all might be hearing a lot of.

Up first, naturally, are the hosts and world power Brazil. 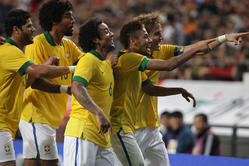 If you haven't taken some time to read SBN's full preview of the World Cup, you really should, it's amazing.

Well, since they were the hosts, they didn't actually go through South America (CONEMBOL) qualification. The lack of competitive matches actually hurt Brazil in the FIFA Rankings, when they fell out of the top ten all the way down to 22nd following a run of games at the start of 2013. A loss to England at Wembley Stadium combined with four draws and only a 4-0 win against Bolivia left the two-time defending Confederations Cup champions in very poor form leading up to the 2013 edition they were hosting.

But Brazil would rebound, defeating France in a friendly and winning five straight games to claim their third consecutive title, beating Spain handily in the final 3-0. The only game Brazil has lost since the Confederations Cup was a friendly at Switzerland 1-0.

PLAYER YOU SHOULD KNOW - Neymar, ST, Barcelona - The 22-year old wonderkid as scored 31 goals in 49 career matches in his international career and will be making his World Cup debut after being on the reserve list in 2010 as an 18-year old.

PLAYER WHO NEEDS TO BE HUGE - David Luiz, DEF, Chelsea - We know Brazil can attack, but it's going to be the defense that will eventually carry this team to a championship. With mainstays like captain Thiago Silva and Dani Alves also likely to be in the back line, it could be up to the big man from Chelsea and soon PSG to avoid his spotty form at the end of the 2014 club season.

It's pretty much championship or bust for Brazil. We all know they have talent and can score, but they're also a very young squad. Most of the experience lies in their defense and goalkeepers while the youth is running rampant in the midfield and the attack. If Scolari keeps this team balanced there's no reason to think they can't win it all, and change my mind that 3-0 win over Spain in the 2013 Confederations Cup final was no fluke.

Africa's qualification is fairly straightforward. The top forty teams are seeded and divided into four pots and then ten groups, each group getting a team ranked 1-10, 11-20, etc. Cameroon was one of the teams in the first pot and their qualification could have gone a little smoother. Don't let the standings fool you, Cameroon might have finished four points clear in Group I, but that was only after they were awarded a 3-0 victory for Togo fielding an ineligible player. Togo would have won the match 2-0 and made things a little closer at the top.

In the playoff round, Cameroon drew Tunisia 0-0 in the away leg before a resounding 4-1 victory at home to seal qualification to their seventh World Cup out of the last nine dating back to 1982.

PLAYER YOU SHOULD KNOW - Samuel Eto'o, ST, Unattached (Last Club Chelsea, EPL) - It's fair to say that if Cameroon is going to get out of this group, they're going to need goals. Eto'o has more goals (56) than the rest of the roster combined (50). Maxim Choupo-Moting (26 caps, 12 goals) and Pierre Webo (56 caps, 18 goals) will also need to help their star player out if Cameroon want to get into the knockout rounds for just the second time ever.

PLAYERS WHO NEEDS TO BE HUGE - Goalkeepers Charles Itandje, Sammy N'Djock, Loic Feudjou - Why the keepers? Because between them they have a grand total of 14 caps. Itandje has the most with nine total but if you're looking for a potential weak point, a group of keepers without a lot of international experience staring down one of the best attacking teams in the world doesn't make me feel very confident of their chances.

I think Cameroon are going to be the spoilers for someone in Group A. I think they can get a result against Mexico and even Croatia. Would it shock me if they got out of the group with four points on a 1-1-1 record by beating Mexico and drawing Croatia? Not at all, but I don't think both will happen. But they'll spoil the party for someone else I think (Mexico) and play as best they can. I just don't think it will be enough to get them out of the group.

Getting drawn into a qualifying Group in Europe with Belgium is never easy, but it could have been worse. The rest of the group - Scotland, Wales, Macedonia and Serbia were all fairly balanced at the back of the table with Belgium the run-away winner going undefeated through ten matches. Croatia got off to a blistering start, winning five of its first six matches and tying Belgium in the other game but faded down the stretch. In their final four games, Croatia would manage only one draw, against eventual third place finisher Serbia whom they secured second place over by only three points.

In the playoff round, drawn against Iceland, Croatia settled for a 0-0 draw away before qualifying for their 4th World Cup in just their fifth attempt since becoming an independent country.

PLAYER YOU SHOULD KNOW - Luka Modric, MID, Real Madrid - I'd be willing to wager that if Croatia is scoring goals, Modric will be factoring into the scoring play if not directly assisting on them. You might have remembered Sergio Ramos' equalizer for Real Madrid in stoppage time of the UEFA Champions League Final, but do you remember it was Modric on the corner?

PLAYER WHO NEEDS TO BE HUGE - Mario Mandzukic, ST, Bayern Munich - And if Modric is getting assists, chances are he's feeding this guy. Bayern's target man doesn't have the prolific scoring record with his country as he does with his club, but every defender in the group is going to have to know where he is at all times.

Croatia stormed into the international stage in 1998 with a third place finish in their first World Cup after independence from the former Yugoslavia in the early 1990s. But they've been unable to recreate that magic on the game's biggest stage, failing to get out the group in 2002 and 2006 and not even qualifying for South Africa in 2010.

Overall, it's a fairly fortunate draw aside from having to play Brazil in the opener. I don't see Croatia doing much past the group stage, especially with a potential Round of 16 match up with Spain likely looming. But I do think they will get that far and probably give Spain a few problems in that game should it happen.

Where to start, besides the fact that Mexico was a disaster in CONCACAF's Fourth Round, also known as The Hex. To say that Mexico was playing badly wasn't always true, but El Tri was certainly not scoring, netting only 7 goals in 10 matches. Mexico started qualification with three draws, including two 0-0 draws at mighty Azteca to the USA and Jamaica. Mexico would win only two matches in qualification, at Jamaica and home to Panama, but secured qualification thanks to an unlikely source: an American comeback at Panama meant both Mexico and Panama lost on the final match day, and Mexico secured the playoff spot by three points.

That playoff would mean an exhausting trip to New Zealand but after a revolving door of head coaches, Herrera finally brought stability and form to the side who brushed aside the Kiwis with ease in two blowout wins of 5-1 and 4-2.

PLAYER YOU SHOULD KNOW - Javier Hernandez (aka Chicharito), ST, Manchester United - We've all seen what Hernandez can do in England and in Europe, but lately it hasn't been translating to goals for El Tri. Hopefully a new manager and a set formation can help get Mexico's attacking superstar into top form.

PLAYER WHO NEEDS TO BE HUGE - Miguel Layun, DEF, Club America (MEX) - I'm not ashamed to admit I like watching this guy play, and he's been on a tear for Mexico since getting called up to the 2013 Gold Cup and scored twice against Israel a few weeks ago. If Mexico wants to get out of this group, it's going to be Layun supporting the attack from his outside back role that could be the difference between Mexico's sixth straight knockout round or an early exit.

Somehow, someway, Mexico finds a way to get it done. It's not always pretty but it's usually effective. Like the US, Mexico has been a bit stagnant at the World Cup the past couple of decades with defeat after defeat in the Round of 16. I don't see them doing any better here either, at best they finish second in the group behind Brazil and face Spain in the next round. But there should be some chances to get a few of their younger players an international stage for moves abroad.

It's the opener and arguably the top two teams in the group. The stadium atmosphere alone should be worth tuning in for if you have the time.

MOST IMPORTANT GAME - Croatia vs. Mexico

Final match for both teams and this could be the game that decides second place, odds are both teams will have already lost to Brazil. That means aside from a positive result against Cameroon, nothing short but a win here will get either team out of the group.

I don't want to say this is "chalk" for the group, but I think Croatia just poses the biggest problems offensively to the other two teams. It's hard to trust Mexico following their qualifying campaign and Cameroon just settled a payment dispute over bonuses before boarding the plane to Brazil.