Watch the video that explains the thought process behind the Revolution's new jersey.

Narrated by the legendary Taylor Twellman, the New England Revolution released a video yesterday describing the thought process behind the new secondary jersey.

The video details the history behind the flag of New England, explaining that it was used before the stars and stripes flag of America was created. As proof of this, Twellman cites John Trumbull's depiction of the Battle of Bunker Hill, which shows the red flag adorning green pine tree.

Take a Peek at the Revs' New Kit 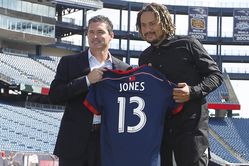 The new kit his here. Take a look at what everyone is talking about and share your own opinion.

The video pays homage to the Foxboro Faithful, stating that the fans have had shown "pride and passion" since the Revolution's inception. The flag-inspired jersey is meant to represent the region and its supporters.

Seen in the latter portion of the video, one of the most unique features of the new kit is the jock tag that reads: "Dating back to1775, this flag represented the New England colonies in the Revolutionary War. This jersey celebrates the bond between the club and its supporters, who fly the flag today."

The video concludes by showing a number of players wearing the new shirt, including Jose Goncalves, Andrew Farrell, Kelyn Rowe, and Juan Agudelo. A solo image of Teal Bunbury is the last sight before the video fades to black.

The new kit can be purchased at MLSStore.com.