The USA won't be in the final, but they're still a deserving semifinal team with a chance to redeem their other poor performance to end Copa America 2016.

If you buy something from an SB Nation link, Vox Media may earn a commission. See our ethics statement.

The United States and Jurgen Klinsmann look to end their 2016 Copa America campaign on a high note, with a rematch against Group A opponent Colombia in the tournament's consolation game at University of Phoenix Stadium in Glendale, Arizona, tonight.

Coming off a dismal performance in the semifinals against Argentina, the US will look to rebound and get a result against a team that beat them 2-0 in the group stage, their only other loss the Americans suffered in Copa America.

"This is a big opportunity for our team to correct that result and show also the growth in the tournament of our team," Klinsmann told the media ahead of today's game. "It's an opportunity also to finish up on a very high note. Sometimes it's better to win the third-place game than lose the final."

I'm not going to debate that last sentence, but after an absolutely inexcusable performance against Messi, what the Klinsmann and the USA need to do is show up. Klinsmann has said he wants to win this game and also in that article above he's starting Tim Howard in goal after serving as the backup to Brad Guzan all tournament. This is fine and this probably eludes to Klinsmann starting most of his regulars including Jermaine Jones, Alejandro Bedoya and Bobby Wood all back from suspension.

I have no problem with Klinsmann trying to win this game, though I'd almost prefer a full game for some of the younger players. Midfielders like Darlington Nagbe and Christian Pulisic were vital in the build up to this tournament and yet have barely seen any legitimate action in Copa America. Perry Kitchen might be the heir apparent to Michael Bradley in the holding midfield role yet still can't beat out Kyle Beckerman for playing time. Ethan Horvath, the hero keeper for the US Olympic team that lost to Colombia in a qualifying playoff, doesn't get his own shot at redemption in a 3rd place game against the senior Colombian team or a chance to prove himself as World Cup qualifying continues later this year.

So instead of a lineup with Steve Birnbaum in defense, the trio of younger midfielders, we'll probably get a very familiar: 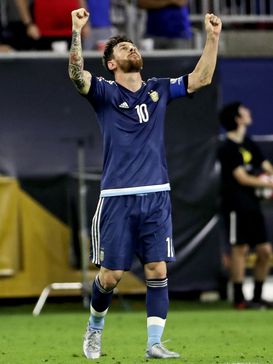 Lionel Messi is good at soccer and the USA is not. Find out why the US got demolished in the semifinals in our Three Thoughts recap of the game.

Basically the same US lineup that went 3-1 in Copa America and lost to Colombia. It's a good lineup that has improved with consistent playing time and familiarity and now will get a chance to redeem itself against the only team that beat it.

Which is a shame because honestly I wouldn't care about the result of this game if the USA literally put out any other lineup except this one. But if Klinsmann's going to trot out his first choice lineup, I'm going to expect a first choice performance.

Does that mean I need to see the USMNT beat Colombia? Not at all. This might be a consolation/3rd place game in a major tournament, so it carries significant weight in the FIFA rankings or something like that, but honestly this is a friendly. I don't know how serious Colombia is going to take it, they might opt to rest stars like James Rodriguez and play their younger players or veterans who haven't featured as often in this tournament as a reward for helping their team get to the semifinals. It could be a chance to evaluate these players in a competitive but ultimately meaningless game.

So, if Klinsmann does opt to play his regulars again tonight, I'm going to want a top performance to make up for the absolute mess of a game against Argentina. No, I don't need a win. But I need to see what Klinsmann calls the "growth" of this team tonight. If he's not going to allow his younger players to grow and gain experience, then I'm going to expect the veteran players to produce and I've honestly seen enough of some of the veterans already for this tournament.

Against Colombia in the group stages, and Argentina in the semis, the USA basically handed their opponents victory in two ways. First, they lost the set piece battle, allowing two elite teams and players get prime opportunities on goal which they converted. These kinds of mistakes (Yedlin's handball PK vs. COL / Wondo pulling down Messi vs. ARG) will usually be punished by teams that are clearly better than you but honestly there's no good option between Messi dribbling at goal or taking a set piece from 25 yards out.

Secondly, and perhaps more important, the US never pushed Colombia or Argentina into fifth gear. They never made either of the South American teams actually work hard for their victory.

That is what upset me most about those two losses. The USA at their worst should always be able to line up and make teams earn results for ninety minutes and too often under Jurgen Klinsmann that hasn't been the case. The US has had two opportunities, two true games against teams that I would consider are clearly better than them talent wise, and have produced two of their worst performances under during Klinsmann's tenure.

If tonight's game has any meaning for the US, it will be for redemption if just to prove to fans that once again they can compete with the best in the world every time. I said compete, not win, what the USA hasn't proved to me in the tournament is that they deserve to even be on the same field as an Argentina or a Colombia.

They have one last chance to prove me wrong.

Kickoff for USA-Colombia will be at 8pm Eastern and the match can be seen on FX.