United States-Bolivia Preview: Will US Carry Over Play From 2nd Half vs. Ecuador?

The USA has never beaten Bolivia in seven international games, will that change today? More importantly, will fans see something that resembled that solid second half display against Ecuador?

Share All sharing options for: United States-Bolivia Preview: Will US Carry Over Play From 2nd Half vs. Ecuador?

The United States is coming off a solid, if mostly unspectacular, 1-0 win over Ecuador from midweek. Darlington Nagbe stole the game late with a wonderfully worked goal and a smart, heads-up play/assist from Bobby Wood.

Christian Pulisic and Alejandro Bedoya also came off the bench in the second half to spark the USA's attack after what can only be described as a dreadful first half. Jurgen Klinsmann may have stumbled onto a formation, or at least a lineup, that not only is really effective but also puts his best players in their best positions.

However, as I stated in my Ecuador match preview, I wanted to rotate the squad for this game to give the presumed starters for the Colombia game at least some rest. And if I were the head coach, that's how I'd be preparing my lineup for today's game. However, we're going to modify that just a little bit for today.

USA 1, Ecuador 0 - Three Thoughts About A Tale of Two Halves 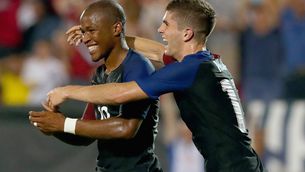 So the first half was bad, then there were substitutions, and then everything was kind of awesome. Will Klinsmann stick with what worked against Ecuador?

Normally I wouldn't start Cameron since I'd want him for the Colombia game, but he's coming back from injury so giving him at least some minutes today seems very reasonable. Perry Kitchen (check out the picture of him in TYAC preview) hasn't featured yet so he gets the job as the true number six along side Bradley. Would I complain that much if Chris Wondolowski started and then Wood came on in the second half? Not really, but since were starting perhaps the "first choice" attacking midfield group, it makes sense to give Wood a run out with them as well.

What I really want to see, if only for about 45-60 minutes, is the Pulisic-Nagbe-Bedoya attacking line. Yes, I know Bedoya was playing a more central position with Graham Zusi as the right midfield against Ecuador but this is the more traditional 4-2-3-1 from the USA. Also, the nightmares we all had about Bedoya in Brazil were at holding midfield, a far different position then say a box-to-box #8 role (which he's pretty good at) or a more wide role as he's featured in the past. Bedoya was a little salty about this distinction midweek, and rightfully so, he's not a CDM nor is he ever likely to be.

@hudsonriverblue yeah did you watch the whole game?
And your NYCFC team losing 7-0 in a "Derby" got me like, Come On Man! #Shhhhhhhh

Boy tough week for HRB, losing 7-0 to the Energy Drinks and getting lit up by Bedoya on Twitter.

Anyway, while Bolivia isn't exactly known for their offensive prowess, La Verde are a very stout defensive opponent to try out this out-of-the-blue, newfangled attacking lineup Klinsmann has stumbled upon. In the second half would I expect to see Zardes-Dempsey-Zusi and probably Jones for either Bradley or Kitchen? Sure, you get to test a new lineup, pull guys out early, everyone gets some rest and gets ready to play Columbia in about a week.

If the US wanted to play more of a 4-1-4-1, with just Bradley as the lone holding mid I'd have no problem putting Dempsey at right midfield as basically a straight swap for Zusi from the Ecuador game. Right now, Deuce can still be an effective player but if he's going to be a striker, he's going to need a partner up top. Wood, Wondo and yes, even Zardes, are far more effective lone strikers right now, but Dempsey is still good at soccer and capable of creative and magical things, so giving him a chance in this new lineup isn't a bad idea.

Geoff Cameron would be the one interesting test case for Klinsmann as far as minutes played today. Does he want to see Cameron go 90 minutes off an injury or give Cameron a solid shift before subbing him out for probably Steve Birnbaum? Either way, I'm not really worried though it would be interesting to see Cameron at right back today with the newly called up Edgar Castillo on the left.

Bolivia comes into Copa America with a mostly domestic-based roster and not a ton of international experience. Striker Juan Carlos Arce leads the sqaud in both games and goals with 49 and 8 respectively. Considering the rest of the roster combined has just 7 goals and 5 players with zero international appearances, this doesn't feel like the team that made the quarterfinals in Copa America 2015 last summer. They currently sit in 9th out 10 teams in CONEMBOL World Cup qualifying with just one win (against last place Venezuela at home) in six games.

Marcelo Moreno, who plays his club soccer in China, scored twice in last year's tournament to lead Boliva but he isn't on the roster for this year's Copa. Yasmani Duk, an attacker on loan with the NASL's New York Cosmos, is perhaps a name a few US soccer fans might be familiar with as well.

Today's game for the US is, as always, preparing for Colombia next Friday and the tournament as a whole. But after the splendid second half display against Ecuador, I'd like to see Jurgen Klinsmann and his team replicate that attacking style of play, if only for the first half. While riding a three game winning streak into Copa America 2016 would be nice, it's far more important for the USMNT to remain in-form and healthy. So if Klinsmann does keep the midfield/attack together from the second half of the Ecuador game, I'd still expect wholesale changes at some point in the second half.

The United States and Bolivia game can be seen tonight on FS1 with coverage beginning at 8pm Eastern.