The USA has two things it must accomplish against Ecuador: get the starters ready for the Copa America tournament and actually picking the starters and giving them a gameplan to beat a top South American team.

Share All sharing options for: United States-Ecuador Preview: Setting Up For Copa America 2016

I'm going to put aside some personal feelings for one Jurgen F. Klinsmann and instead hope that the United States actually does something that I consider very smart for today's friendly against Ecuador.

It's an old FIFA14 strategy that I used to do, and though it probably had no bearing on anything since I would probably beat the computer anyway, it has a better real world application. I have always been a fan of rotating the squad as the virtual manager to keep players at peak fitness/energy levels. Normally during an virtual international break, I'd pick the stronger of the two national teams and run out the starters before doing a full line change for the other game and starting the second string. These next two fixtures give the USA a very excellent chance at a true litmus test against Ecuador ahead of their Copa America opener and the ability to give everyone on the roster game minutes before a major tournament.

So that means putting the same team against Ecuador today that you want to face Colombia with on June 3rd and then basically everyone else who didn't start in the lineup against Bolivia on Saturday. The starters get a game against a legitimate World Cup knockout team before watching the second team gain valuable experience in they're called upon later in the tournament.

Ecuador are very good at soccer. They're currently tied atop the CONEMBOL World Cup qualifying standings having beaten Argentina and Uruguay already and basically anyone with the last name Valencia on the team is a really, really, good player. These are things many of us already knew, so why I am I oddly excited for tomorrow?

Well, there's always the off chance that Klinsmann does something that I think is logical, a wonderfully fascinating game that usually ends with me, and probably many others, hanging their heads in shame and/or pulling their hair out. Because we've all been fooled too many times at this point to believe that any rational or conventional thought from Klinsmann even exists when it comes to picking his lineups.

This time however, I have a plan. Which means it's sure to go wrong, but it's still mine and logic says I'm doing this right. 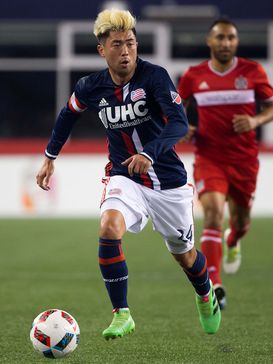 This is a move that could come back to haunt the US, unless Jurgen Klinsmann gets his lineup right before Copa America.

Do I think this is the best USMNT lineup right now? No, because Geoff Cameron is hurt and he'd probably be in for Brooks. There also a pretty good chance that Fabian misses the match due to injury as well which would open up several other problems of how I'm going to view this match later. Do I think this is the best formation the USMNT can play? No, that's still the 4-2-3-1 but with the USA basically non-existent in the playmaking CAM department this is what I'm left to work with.

Now, part of this formation exists because Klinsmann brought seemingly every single holding midfielder in the player pool and no left backs. Fabian Johnson easily solves that fullback issue but then immediately opens a hole at the left wing/midfield spot. I don't really care how you describe it or technically line up the players, but Clint Dempsey and Alejandro Bedoya are more box-to-box/winger types with the fullbacks (Johnson and DeAndre Yedlin) overlapping at will when they can to provide the width for the attack. Why this instead of the typical 4-2-3-1? Because it gives the US a chance to get their best players into a working formation that shouldn't suck.

The central midfield "triangle" is inverted this time. Instead of Michael Bradley and Jermaine Jones as two holders with a creative player ahead of them, I'm giving them Kyle Beckerman as more of a lone holder and pushing the two stalwarts slightly upfield. Bradley can come back to the ball and Jones can do that playmaking, #9 thing he's been doing with the Rapids. I don't know if it will work but this is the one part I'm nearly certain Klinsmann will deploy despite varying degrees of the Bradley-Jones partnership working over the years.

And that's not a bad thing, not this time.. If Klinsmann isn't going to call up guys like Lee Nguyen and use them in their natural, central attacking role, then at least he can put the players he is comfortable with in positions they can succeed in. Yes I know this goes against everything Klinsmann says about comfort zones but right now, this is the best midfield triangle Klinsmann's likely to give us and I'm okay with that. Bradley and Jones are dangerous two-way players with their own skill sets and when they do work well together, the USA is usually a pretty good team.

With the wingers possibly pinching in a lot, this should open up space for the fullbacks to operate and send in crosses to Jozy Altidore Bobby Wood or find the late runs from Bradley, Jones, etc. Again, theoretical things I think the US should do but probably won't. Regardless, the combination of KB-MB-JJ is at worst probably going to be mostly effective and difficult to break down and at best be good enough to win Copa America. With Jones having another renaissance year in MLS, I'd be leaning towards the latter but there are other potential issues that will likely prevent this from happening. More on that at a later time.

This means that, in theory with the starting lineup I used above, the second team for the USMNT is as follows:

Admittedly, that seemed far worse in my head going into this tournament but certainly it's a functioning lineup. Am I asking Zusi to play more centrally here, yes, but in a pinch he can do fine there. More likely you would see a Kitchen/Beckerman partnership with Pulisic-Nagbe-Zusi attacking line ahead of them it's not bad. Does the second group of defenders leave a lot to be desired? Yes it does, especially when I can go with Ream-Omar Gonzalez-Matt Miazga-Brad Evans and be very comfortable those guys are going to do fine.

That second lineup more serves to keep the starters rested for the group opener against Colombia rather than proving the USA's second string can beat Bolivia on the weekend and I can deal with a small problem of one or two players out of position instead of seemingly five.

Do I like this roster from Klinsmann for Copa America? No. I don't, but I'll complain about those problems later in a different post before Copa America starts. Today is about assessing how ready the USMNT is for Copa America and while results in friendlies are generally meaningless, this game is very important.

Defensively the US is going to have a lot to do, so keeping the backline organized and having Beckerman/Bradley/Jones put out fires in the midfield should help take some of the pressure off the defenders. Offensively, with Jozy Altidore out it's the big stage for Bobby Wood who is in the best form of his life and has a chance to cement his place for the World Cup cycle with a solid showing in Copa America. All of this starts today against Ecuador.

Also, DeAndre Yedlin is, at long last, a right back and finally will get a chance to show just how far he's come after a solid campaign in the EPL with Sunderland. I crushed Yedlin the right back two years and one week ago in that above post after a 5-0 Seattle loss to New England where I basically said Yedlin didn't know how to play right back. He didn't have the tactical awareness for the position in that game and so looking back at that horror show to what you see now? That's an impressive jump in just two years.

And I don't think it was wrong then, but towards the end I mentioned comparisons to Steve Cherundolo, the Mayor of Hannover himself, and this tournament could be Yedlin's coming out party as the USA's future right back. I'll happily eat crow for that article if it happens because there were whispers DeAndre could have that kind of career as a defender and two years ago there were flashes of it being a reality. Now we have to see if Yedlin can pull it off.