Jermaine Jones and the USMNT square off with Brazil at Gillette Stadium. Jake Catanese previews the action.

Before I get into the actual game preview, there's something that's been bugging me over the summer. The United States have played twice at Gillette Stadium, the other game against Haiti during the Gold Cup, and yet Jermaine Jones will be the only New England Revolution player to feature in a game for the US in New England.

Two other Americans have ties to the greater Boston area, Geoff Cameron is a Massachusetts native and Alejandro Bedoya went to Boston College. It will be a nice homecoming of sorts for all three players with New England ties but part of me still wonders when more of the Revs players will get a shot from Jurgen Klinsmann.

I understand Klinsmann is preparing for a big game against Mexico next month for a berth in the 2017 Confederation's Cup in Russia, but if Jordan Morris has a chance to play with the U-23s for Olympic Qualifying, why not bring in Juan Agudelo, who has to simply drive to a different practice field? Agudelo has been with the USMNT at times this year and while he's been coming off the bench in New England recently, he's been scoring goals up top with the in-form Diego Fagundez starting on the wing. 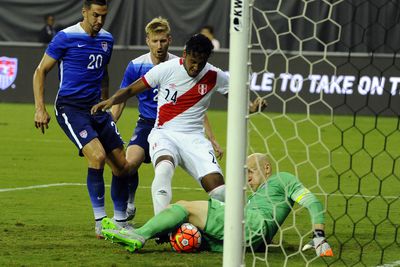 Since Klinsmann forgot to call up any fullbacks, or start any against Peru (apologies to Greg Garza), why not take a flier on Chris Tierney at left back and see what he can do even in a short stint with the national team. Andrew Farrell could also feature out on the right flank as well as the center and if you're not going to bring in Lee Nguyen as he's reaching top form now, then I can't fix what ails the USMNT as far as personnel.

Because calling up some of the talented players from the local Revs team still won't fix the issues that the US has tactically. Only Jurgen Klinsmann can do that but I've already harped on his roster decisions and blatant homerism enough today. As much as I'd like to see some of the Revolution players get deserved call ups to the national team, I'll settle for the USA playing well for 90 minutes in a formation that they look comfortable in.

Against Peru, the US midfield was simply out of balance. I'm not sure if Jones and Bedoya were playing in a diamond last Friday, but they certainly lacked a lot of chemistry in the center of the field. Neither player started the game well as the US struggled to combine passes and effectively get the ball into Peru's half, let alone the attacking third. Mix Diskerud more box-to-box style in the second half did help but only because he wasn't as isolated as Bedoya was in the middle. It was Jones' late first half blast that really got the US into the game was he created a turnover, dribbled forward and ripped a shot from outside the box, forcing Peru's keeper into a good save.

The flank play from Gyasi Zardes and DeAndre Yedlin continues to impress, as both youngsters are able to use their speed to bomb forward and counter attack. In the second half the US was able to link up well with their wingers and expose pockets of space in Peru's half. Jozy Altidore was able to capitalize as well, drawing and converting a penalty rebound and cleaning up a deflected cross from Zardes for the game winner. Bobby Wood was also isolated though Aron Johannsson did well off the bench in the second half as the USA had the better run of the game in the later stages.

No Jones, No Problem for Revs 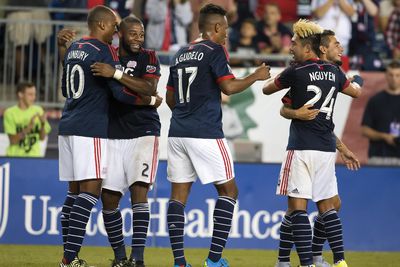 With Jermaine Jones and Kaka away on international duty, the Revs dismantled Orlando en route to a 3-0 win

Which brings us to why the US formation didn't work against Peru in the first half. Yes, the backline and center midfielders were bad at passing the ball out of the back to start the game, but this to me is also a tactics problem. With two strikers up front isolated and Bedoya struggling to find anyone in particular, one of the strikers needed to be a positive option for his teammates. Something other than kicking long balls into the corners or acting as a target man forty yards from goal.

The USMNT should've started the game in a 4-2-3-1, not a broken 4-4-2 and how anyone is ineffective out of that formation will always boggle my mind. Bedoya is best deployed as a #10 in this formation where he can be higher up the field and pick out the wingers and striker in front of him. Jones and Bedoya would have another option to pass to in the middle of the field and might have struggled a bit less to start the game.

That extra player in the midfield would have been Bradley but he was unavailable with club commitments for the Peru game, which was fine. Danny Williams could've handled the #6 duties just fine in my opinion and I'd have started him at holding mid over Bobby Wood as second striker against Peru.

But against Brazil, the extra midfielder will be to shutdown the playmakers from Brazil like Kaka and hopefully give Zardes and Yedlin chances on the counter. I still think the US is at its best when they defend first and counterattack effectively. They're capable of scoring on the buildup, but they're the most dangerous when Yedlin and especially Zardes recently are able to get in space and take players on.

Defensively, seeing Matt Besler return to Sporting Kansas City after a short but spectacular substitute appearance off the bench is depressing. The two best centerbacks the USA have right now are Besler and Omar Gonzalez and the World Cup tandem still didn't play together against Peru. John Brooks is the starter of the future, and it was Gonzalez's gaffe that gifted Peru their lone goal, but I'd still rather have those two against Mexico next month.

Tim Ream was stellar defensively at left back so I'm willing to give him the nod there again with Garza maybe getting the second half. Michael Orozco likewise had a good defensive shift in one half against Peru, but Cameron's introduction in the second half was a lightning rod as the US fullbacks were rarely in the attack in the first half. Ream will likely still have issues getting forward but can support Zardes on the wing at least. Cameron's ability to overlap with Yedlin, a speedy player who can cover defensively, could be a tremendous asset later tonight to break down Brazil.

The only time the United States has ever beaten Brazil in 19 meetings was back in 1998 and Kasey Keller pitched one of the best shutouts in USMNT history. The 2009 Confederations Cup Final still haunts my nightmares (though this Charlie Davies to Landon Donovan counter was amazing) and nothing would give me greater joy than to write a positive report of tonight's game.

Not necessarily a positive result, because this is a friendly and the results technically don't mean that much. Being able to look at Tim Ream at halftime vs. Peru (meh) to the end of the game where he locked down the left flank are the types of individual assessments Klinsmann and the staff are going to see and eventually make a decision on the roster that plays Mexico next month.

Many of the players on the roster now will also be there in October, but there are a few players who are trying to secure bench spots, Orozco likely one of them and perhaps Jordan Morris at striker being another. The bulk of the US starting lineup and key bench players is set, the formation and specific starters are always a bit of surprise but we know guys like Dempsey, Bedoya, Bradley, Altidore and Jones will all be on the roster to face Mexico in the all important CONCACAF Cup playoff match.