The Moment on Riverbend Drive: A Narrative of a Supporters Trip to Red Bull Area

I'm sure everyone that ventured to Red Bull Arena Saturday is just as exhausted as me. It was a long trip full of logistical hurdles, unforgettable moments and forgettable results. Here's how it all happened...

Share All sharing options for: The Moment on Riverbend Drive: A Narrative of a Supporters Trip to Red Bull Area

Editors Note: Brendan is the Executive Director of The Rebellion, a New England Revolution Supporters Group.

Saturday was the largest coordinated trip ever put together by the Midnight Riders and The Rebellion. Nearly three full busloads of supporters in addition to several others heading down on their own were set to descend on Red Bull Arena to support the Boys in Blue. In the wake of the news that Kevin Alston had been diagnosed with a treatable form of leukemia and the Boston Marathon bombings hitting close to home for Revolution players and supporters alike, this game was set to take on a whole new level of significance.

While the ink was drying on banners showing support and well wishes to Kevin Alston, supporters worked throughout the week finalizing displays to honor and recognize the resiliency of a city, a country and a people. Midway through the week, we (New England SG leadership) were contacted by groups from the South Ward, the New York Red Bulls supporters section consisting of Empire Supporters Club (ESC), Viking Army and Garden State Ultras (GSU). They were offering messages of support and inviting us to their bars and offering various forms of hospitality for those making the trip. Plans began to assemble with the leadership of all groups late in the week about a joint march into Red Bull Arena.

This is no easy feat. Coordinating the movement of hundreds of Revolution supporters to any away match comes with strict time tables for police escorts and Red Bull security. For those who are unaware, with all away trips a conference call is held with the host club's Front Office, security teams,etc. We iron out details, logistics, parking and more. Deviating from an already agreed upon plan and timeline the day before a match is tough. There are specifics routes we are instructed to take from our rally point at O'Donnell's Pub to march to Red Bull Arena as they stop traffic to accommodate our march through the streets of Harrison, NJ. Special thanks goes out to Shaun Oliver, Director of Operations at Red Bull, himself with Boston ties, for working through all the hurdles and loose ends to make this a reality. Plans were set, and Red Bull released news that Revs fans and Red Bull supporters would be uniting for a joint march into the stadium.

Saturday did not start off as planned for traveling supporters who assembled at pick up locations in Cambridge, Foxboro and Wallingford, CT. One of the three buses, broke down and finding a replacement was near impossible due to the lock down creating a back log and strain on resources. As if we needed any more proof of our resiliency, we asked for volunteers who instead of riding the bus, would offer to pack their cars with supporters and drive to New Jersey. Volunteers stepped forward. Hurdles were overcome. Even Revs President Brian Bilello when hearing of the shortage offered seats in his own car. (Thanks to everyone who stepped up, much appreciated!)

We arrived at O'Donnell's Pub in Harrison, NJ to a scene full of Revolution red, white and blue. The bar, at capacity, spilled out onto the sidewalks as everyone prepped for the match. A couple locals made their way to the bar to offer toasts and words of support. It truly was something to hear one New Yorker, his family affected by September 11th attacks, share his experience with some our fans who themselves were closely impacted by the Marathon bombings.

"It took us too long to get our guy, to get our justice. You guys? Less than a week, congrats."

- A Red Bull fan at O'Donnell's

This was said by a smiling Red Bull fan to us as we toasted. Now that I've time to digest these words, I realize what that statement really means. We are fortunate to have captured or killed (hopefully all) of those responsible for the attack in less than a week. While it doesn't completely erase the pain of injuries or loss of life, I have to believe that it helps move along the grieving process. I wonder if it brings about closure more quickly knowing those responsible will have been caught or killed. I can't imagine suffering through almost ten years to know justice was served.

Now properly hydrated, Revs supporters began their human convoy down the sidewalks of Harrison towards Red Bull Arena. As we got closer to the stadium, you could see a long line of supporters in the distance holding a gigantic banner, waiting for us to arrive. We approached loudly chanting "Boston Strong!" Red Bull supporters, the front of their crowd holding a banner reading "New York Stands With Boston" echoed the chant, while a general applause filled the background. 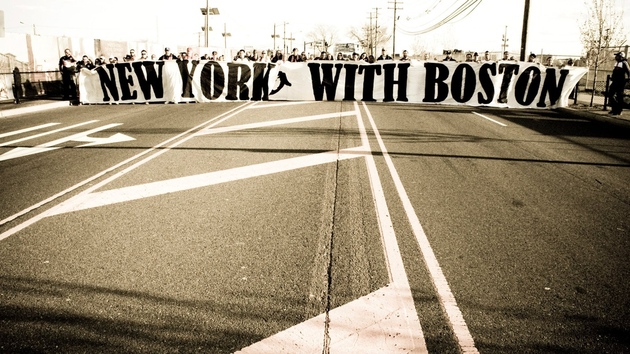 I was at the front of the New England march. It was awe inspiring the amount of fans behind their banner. I really didn't know how it was going to play out or where to go once we got closer. My indecision was short lived as almost immediately Red Bull fans came up to us, extended handshakes, hugs and exchanged scarves as the chants evolved into patriotic American songs. Those initial interactions with those Red Bull supporters, under a chorus of God Bless America will no doubt remain one of the most powerful, organic and special moments of my life.

The "New York with Boston" banner was then turned to square up to Red Bull Arena along Riverbend Drive to prepare for the joint march. My fellow Rebels quickly broke out large lettering spelling "BOSTON STRONG" and passed them out and formed a row behind the banner. The rest as they say is history. Check out the video below and the links beneath it.

Red Bull New York video | Red Bull Fan Video | Devin's Video | ESC Video
This is the culture of soccer in the United States. We supporters, siblings that often quarrel, are all part of one family. No city more so than New York can sympathize with and understand the pain and heartache that Boston is recovering from. The Rebellion banner in the Revs section read: You will not break us. We will never fear you. Our city, our Country will always overcome. The march down Riverbend Drive helped transform those words painted on a banner into a reality we can all believe.

"It may sound trite to some, but something like the Boston situation transcends sport, transcends regional geographic and cultural rivalries like New York vs Boston. If we can't recognize that we should all be standing together during moments like these, then we're just doing it wrong."

Nothing really prepares you to be an ambassador for an entire city and state. I remember having this experience early on in my military career. I had not yet deployed at the time and people often approached me to convey their thanks and appreciation for who you are and what you do. At first it's unsettling, but with time I began to understand that when in uniform regardless of my role or affiliation that for the civilians of this country I was a conduit for them to express all of their appreciation, well wishes and thanks for all veterans from all branches of the military. It's a therapeutic exercise for civilians and a solemn responsibility for the military; to receive thanks and gratitude for those who can longer do so. If you were there on Saturday, that's what you were doing on behalf of everyone back in Boston who is still suffering. Be proud and keep them in your thoughts.

I'll let Jeff Lemieux have the last word and sum it up.

Special thanks goes to Red Bull Front Office and the leadership of all supporters groups involved. If you were there, share your experiences in the comments below.