The MLS Players Union has released their latest player salary data...cue the debate about who's overpaid, underpaid and who deserves a raise.

The semi annual release of salaries from the MLS Players Union always reminds me how young MLS is. In a world where people complain about overpriced athletes, one should note the league minimums in MLS compared to other professional sports leagues. Here in New England the salaries range from Benny Feilhaber to Michael Roach with a huge a crop of players floating in between. Take a look at the payroll data below for the New England Revolution below. 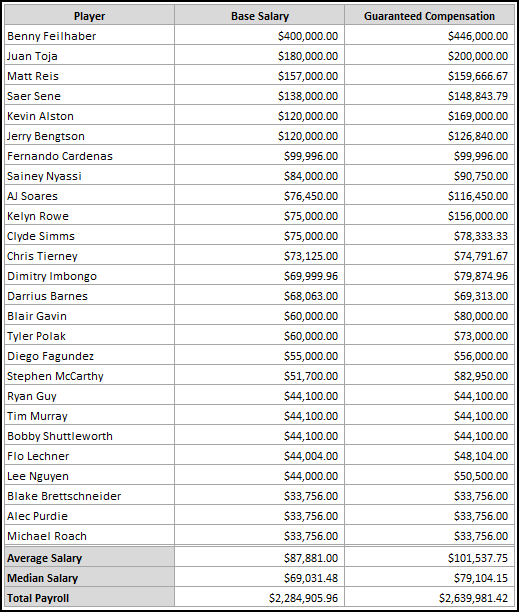 Nyassi isn't under performing, he's just simply not. Nyassi, a contributor at age 18 to Revolution playoff clubs has been an ingredient left out of the recipe for a while now. Common belief is that a lack of development from a lack of coaching has led to an early 20's plateau that might take an exit from New England to correct. For some reason, maybe it's his effectiveness in FIFA '13, I still believe his speed could be employed late in a game and wreak havoc on a tired defense. This dream may be isolated to my PS3 though.

Benny Feilhaber has nearly reached the level of Designated Player in terms of salary. However, fans have have yet to consistently see a Designated Player caliber product on the field. Flashes of brilliance have been marred by inexplicable actions like burying his head in his hands after missing a shot while a rebound falls within striking distance. (See below) Has he been thrust into a leadership role that he is ill prepared for? Benny is a world class player, we know this--but what we don't seem to know is what it will take it for it to show week in week out. For nearly half a million dollars we'll need more than just a goal and two assists out of him and we all know he is capable of more. Please prove it to us Benny, you're like aliens to our David Duchovny; we want to believe.

Underpaid and Over Performing: Lee Nguyen

All I can think of is this scene from Rounders where Teddy KGB infamously says, "Pay him, pay that man his money."

Lee Nguyen is the clear bargain on this roster. Nguyen is making $21.17 for every minute he played this year. Folks that's less than seat in the Fort. Nguyen has five goals and two assists in the 30 games he appeared this season. The introduction of Nguyen's flashy play, creativity and ability to hold the ball was a breath of fresh air to a stale offense from 2011. A bump in pay for Nguyen should be the first item on the off-season agenda for the New England FO.

It was Nguyen's abilities which gave substance to the promise of a new style of play; where ball possession was maintained and creativity sought. For those who followed this season the highlight below is when the light bulb went off in my head that this guy is for real and that the Vancouver Whitecaps are insanely foolish for letting him go.

What other observations can you make with this data? What salaries shock you? Share below in the comment section.

* Keep in mind that some of these players don't count against the cap, and not all numbers actually represent the cap hit thanks MLS's confusing salary rules. The stuff that's clear - Jerry Bengtson is a DP, but his cap hit is due to a transfer fee. Benny is not, and all of his salary is on the books. Kelyn Rowe and Tyler Polak are Generation Adidas, and therefore do not count against the cap. Diego Fagundez is Home-Grown, and does not count against the cap. Essentially, those guys are paid with house money that doesn't cost the Revs anything.