The Rhinos take their 1-1-0 record on the road to Red Bull Arena to play a dangerous NYRB II team. The Baby Bulls have a couple of the hottest players in the Eastern Conference of the USL at the moment.

In 2015 the Rhinos did not lose until the twentieth game of the season; in 2016 that only lasted until the second.

While there were bound to be changes from the squad that lifted the USL Championship last fall, perhaps few thought they would be so immediate, especially considering the classic Rochester Rhinos road victory at Pittsburgh to open the season. 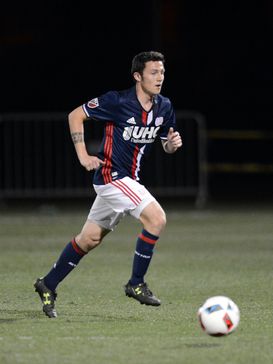 The Wake Forest rookie attacker is the third Revolution player to go on short term assignment with the reigning USL Champions in 2016.

I spoke with Jake Evans of Once A Metro about what the Rhinos are likely to face down in Harrison, NJ. Evans told me that the injury crisis in the senior team means that several players who would have been likely starters have traveled to Colorado for the MLS match. Luckily, Rochester won't see Tyler Adams, Justin Bilyeu, Zach Carroll, Alex Muyl, Sean Davis, or Anatole Abang. Evans was quick to point out that Allen and Etienne are still in Jersey, as is Ryan Meara who was a leading candidate for MLS rookie of the year before getting plagued by hip injuries.

Evans pinpointed the positive distribution of Williams from deep in central midfield and the exciting wingplay of Flemmings. If Rochester isn't careful, the Jamaican attacker's smart movement off the ball can lead to devastating results once he turns on the jets into space. New York announced on Saturday that it had signed Mali youth international Zoumana Simpara, but Evans see the midfielder as an option off an otherwise short bench.

There are roster important roster notes for Rochester ahead of Sunday afternoon matchup, one is a potential game-changer and one appears to establish a trend for he 2016 season.

Rochester's third game of the season marks the first eligible contest for Cabo Verdean striker Steevan Humberto Fortes "Duba" dos Santos. Duba was dismissed and ultimately suspended three games for headbutting Louisville's Aodhan Quinn during the Eastern Conference Finals in 2015. The powerful forward offers both an outlet as a target man and something of a pure finisher as Duba always looks first to goal any time he's within 25 yards.

This match is also the third time this season that the New England Revolution have sent a player on a one-game assignment to the Rhinos. Against Pittsburgh Donnie Smith started at left back and against Richmond Jordan McCrary started at right back on loan from the Revs. If midfielder/forward Michael Gamble starts for Rochester against the Red Bulls, it would set a unique precedent in the relationship between the two clubs, now entering its fourth year.

With the return of Duba to the lineup and Gamble's noted versatility, it would make sense for the Wake Forest alumnus to slot in on the wing. If Gamble shows a bit more of an understanding with his teammates than McCrary did in his lone appearance for the Rhinos, Rochester's attack can put pressure on a young New York defense.

Plewa, WIlliams, and Bonomo all started for the Red Bulls in Rochester in the Eastern Conference semifinals in October and will be itching to set the record straight. Plewa, in particular, should be fired up for this game as he was sent off in the 22nd minute last fall for fouling Duba.

The match kicks off from Red Bull Arena at 4:00PM on Sunday, April 17. The match will be streamed on YouTube