As other teams around the USL kick off the season this weekend, the Rhinos looked squarely in preseason mode against Syracuse. Versatile midfielder Ryan James scored a rebound in the first half for the only goal of the game.

The lineup that Bob Lilley started on Friday night against Syracuse University is probably similar to what he'll field next week in the team's season opener at Pittsburgh Riverhounds. Returning goalkeeper Adam Grinwis started behind the centerback pairing of Vasili Apostolopoulos and Joe Farrell. Dominic Samuel at right back and Sean Totsch at left back are both serviceable players in those positions but have shown better in other roles.

Mike Garzi and Tim Payne sat behind attack-minded players Marcos Ugarte on the left, Ryan James on the right, and Kenardo Forbes in the middle. 2015's joint leading scorer Christian Volesky played at the lone forward in the first half and operated well as the target man.

Tim Payne was tasked with playing more of a defensive role in central midfield than he appeared comfortable doing. The referee whistled Payne for two late, physical challenges early in the game and the New Zealand international was visibly frustrated about the work he had to do in the middle of the field.

Perhaps indicating a weakness through midfield, either actual or perceived, both Totsch and Apostolopoulos jumped at a chance to carry the ball forward or to join the attack with a late run. On the defensive side, Apostolopoulos was characteristically strong in the air. 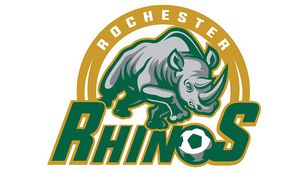 Brendan Doherty runs down the hectic offseason for the Rhinos and what they'll need to do this year to defend their USL title.

Rochester's goal started with a ball up towards Volesky. Syracuse's right back appeared to control the ball that bounced away from Rochester's forward. Ugarte darted in from the wing to steal the ball from his opponent and drove into the 18-yard box. Volesky had wheeled around to make an overlapping run and received a pass into his path from Ugarte. Rochester's returning forward creatively attempted a hard chip shot which forced Syracuse's goalkeeper into a good save. Unfortunately for the visitors, the rebound dropped in front of the far post where Ryan James slid in to knock the ball into the back of the net.

The scoring sequence contained a few positive trends for the team to build on. Ugarte showed tenacity to pressure the Syracuse fullback on what might have been a dead play. Volesky showed inventiveness to make the correct run and to force a save with his choice of shot selection. Finally, James followed up the play and reacted more quickly than his opponents to score.

Around the hour mark, the team switched to a 4-4-2 which opened up the game considerably. While the Rhinos were able to throw a few counter attacks together, the space through midfield exposed Rochester more often. Mike Garzi, entering his third season with the club, showed attacking intent and the ability to drive the team forward on a number of occasions after the formations switch.

The best chance of the second half was sparked by Steevan Humberto Fortes "Duba" dos Santos but also fizzled out with the big Cabo Verdean forward. After an earlier passing sequence broke down, Duba pressured a Syracuse player in midfield and fought to win possession after a series of challenges. Duba then picked his head up to play a great through ball on the ground for Asani Samuels to run onto from the right wing.

The hero of the USL Championship game, Samuels pushed forward into the box and drew two defenders to him before he cut the ball back to the penalty spot toward an on-rushing Duba. The prolific goalscorer, who had followed up the play into an open pocket of space, attempted to slow down as the pass was slightly behind him and slipped. From a seated position, Duba tried to keep the play alive but Syracuse was able to clear.

As with many attacks on the night, Rochester's urgency and intensity was a step off. After the game, Rochester Head Coach Bob Lilley spoke passionately to his players for about a half hour. After the team was dismissed, I asked Lilley about the team's performance and his preparation ahead of next weekend's season opener.

"First of all, let's give Syracuse credit for what they did tonight," Lilley said. "They have some quick players and they competed well. They certainly caused some problems."

"Right now, we're easy to play against though." Lilley liked what he saw against Ottawa Fury FC but thought that the team's performances have been lacking since then. "I think the last few games, we've been a bit on our heels and given teams a lot more time and space to play. And when you do that, you allow teams to pick you apart a little bit."

"Guys are playing at 70% speed and you can't, you're not going to trouble a lot of teams like that. The energy has got to go up. You've gotta compete better. We've been complacent."

Ryan James has played in central midfield, on the right wing, and also at left back for the Rhinos during preseason. Lilley had words of praise for the game-winner on Friday night. "It's nice to have some players like that and James has done well wherever we've stuck him. He competes hard and I thought he was a bright spot. Garzi played pretty well too. But I don't have a long list of players that I think were at their best tonight."

"The standard here is high. A lot of people would be okay with the result, but we weren't at the level we need to be and next week counts for real. If we don't play better next week, we're gonna drop points in Pittsburgh."

A theme running through the game and my conversation with Lilley was the lack of strength in midfield. Club captain Tony Walls should fix a lot of issues in the team when he arrives in Rochester. Lilley told me that Walls was given an extended break after the indoor season ended and that he'll join the team ahead of the season opener.

Lilley also mentioned that a few more players will come to camp for the last week of preseason. One notable player that joined the team last Monday was Wal Fall, a German defender who has played in German lower divisions and the Austrian second tier. Fall is cousins with former New England Revolution DP midfielder and USMNT player Jermaine Jones.

The Rhinos open the 2016 USL season and their title defense on the road against the Pittsburgh Riverhounds on April 2.