A brief, but detailed look at the upcoming 2016 USL season for the returning champions Rochester Rhinos.

Key additions: TBA; the team's roster is still a work in progress. Read this recent look at Rochester's preseason to understand why.
Key departures: Brandon Miller, Grant van de Casteele, Onua Obasi, Johnny Mendoza, Alex Dixon
Projected starting XI: The lack of announced signings at this point makes a lineup abstract but the formation will be similar to the 2015 season. Fullbacks will be encouraged to push forward while one winger paints his toes on the sidelines and the other cuts in centrally. One forward will play as a powerful target man while the other drops deep to create attacks from the midfield. Lilley generally calls this setup a 4-4-2 but it's something similar to a 4-4-1-1 or a 4-2-3-1. 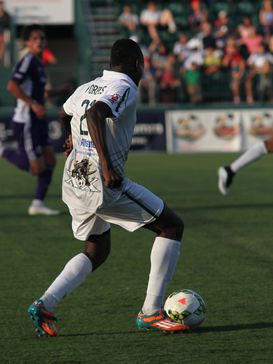 The Rochester Rhinos have had a lot going on off the field with their ownership situation and have lost a lot of players from last year's championship team. But fear not, Bob Lilley is still in charge.

Most casual observers of the USL will have heard of the ownership instability in Rochester over the offseason. On January 1, the former owners found themselves without a lease to the team's home venue and, soon afterwards, found themselves without the franchise rights to the Rhinos. The USL stepped in to revoke the rights from Rob Clark and, after entertaining some lucrative bids to relocate the team to another city, sold the team to David and Wendy Dworkin.

There was an undeniable personnel turnover between the championship season and the 2016 season kickoff but that may not affect Rochester as much as it would do other teams. Bob Lilley and his assistant coaches have the confidence of the holdover office staff and the new owners, which gave them the freedom to concentrate on their tasks while near-chaos was bubbling off the field.

The team hasn't officially signed many players but the 10 players returning from 2015 provide a strong foundation into which late acquisitions can fit.

Why you should watch Rochester in 2016: Coach Lilley surprised a lot of people with the powerhouse team he put together for the 2015 season. This year the expectations will be much higher both around the league as defending champions but also within the city while the new ownership regime makes it mark.

Teams around the Eastern Conference will look to hit the Rhinos with their best shots to show that last year was an aberration. This could overwhelm Rochester or it could play into Bob Lilley's hand as his teams are built for absorbing pressuring and breaking on the counter.

3 Players to watch:
Steevan Humberto Fortes "Duba" dos Santos: Duba took a bit of time to acclimate to Rochester and the style of play in the USL but once he did, the Cabo Verdean forward didn't look back. The D-Train had 8 goals in the league last year, scoring once every 134 minutes of play, and looks ready to replicate that rate from the start of the season.

Bradley Kamdem: The Paris native was drafted by Colorado Rapids after three years at University of Nevada Las Vegas and has excelled at left back in preseason. With the departure of Obasi, Kamdem definitely has big shoes to fill but coach Lilley already talks about finding midfield pieces that complement his attacking runs up the flank.

Vasilios Apostolopoulos: The big, Greek defender was a mainstay of the stingiest defense in USL last year but will be returning without his partner van de Casteele or his goalkeeper Miller. Apostolopoulos not only showed his aerial prowess, defensively and on attacking corners, but also an impressive range of passing out of the back. If he can find his form again in 2016 with a new back line, the Rhinos will get results.

The 2016 season will be a success if... Bob Lilley finds some talent late in preseason and the team wins its games at home. The Rhinos should set up well to steal points on the road but the team needs to show it can overpower its opponents in Rochester and extend the honeymoon with fans.