Rochester traveled up to Quebec to play FC Montreal and left with the three points and a clean sheet.

The Rochester Rhinos' team bus followed a familiar route up the interstate to Canada and into Quebec. About a decade ago the team would have been accompanied by fans in caravans or a rented bus of their own during the heyday of the rivalry between the Rhinos and the Montreal Impact. While that rivalry has cooled since the Impact joined MLS, a few of the players for FC Montreal remembered growing up hating Rochester as many Rhinos' fans recall the years of hating Montreal.

With that historic rivalry as a backdrop, the Rhinos and the Impact's professional reserve side in USL kicked off in Montreal at 2:30 on Saturday afternoon. Similar to the first two games of the season, Rochester controlled possession and created chances in the early going.

Colin Rolfe was active in the opening twenty minutes of the match but couldn't find the back of the net.  Rolfe received a ball played through the FC Montreal defense but his shoot rolled wide of the post. The center referee showed Rolfe a yellow card for a 50/50 aerial challenge with Montreal's goalkeeper David Paulmin. This decision was rather prophetic for both the trend of officiating decisions in the game, several Rochester players received treatment from late or hard challenges, and for Rolfe himself. Because the USL allows five substitutes per game, coaches generally decide to sub a booked player instead of risking a second caution. 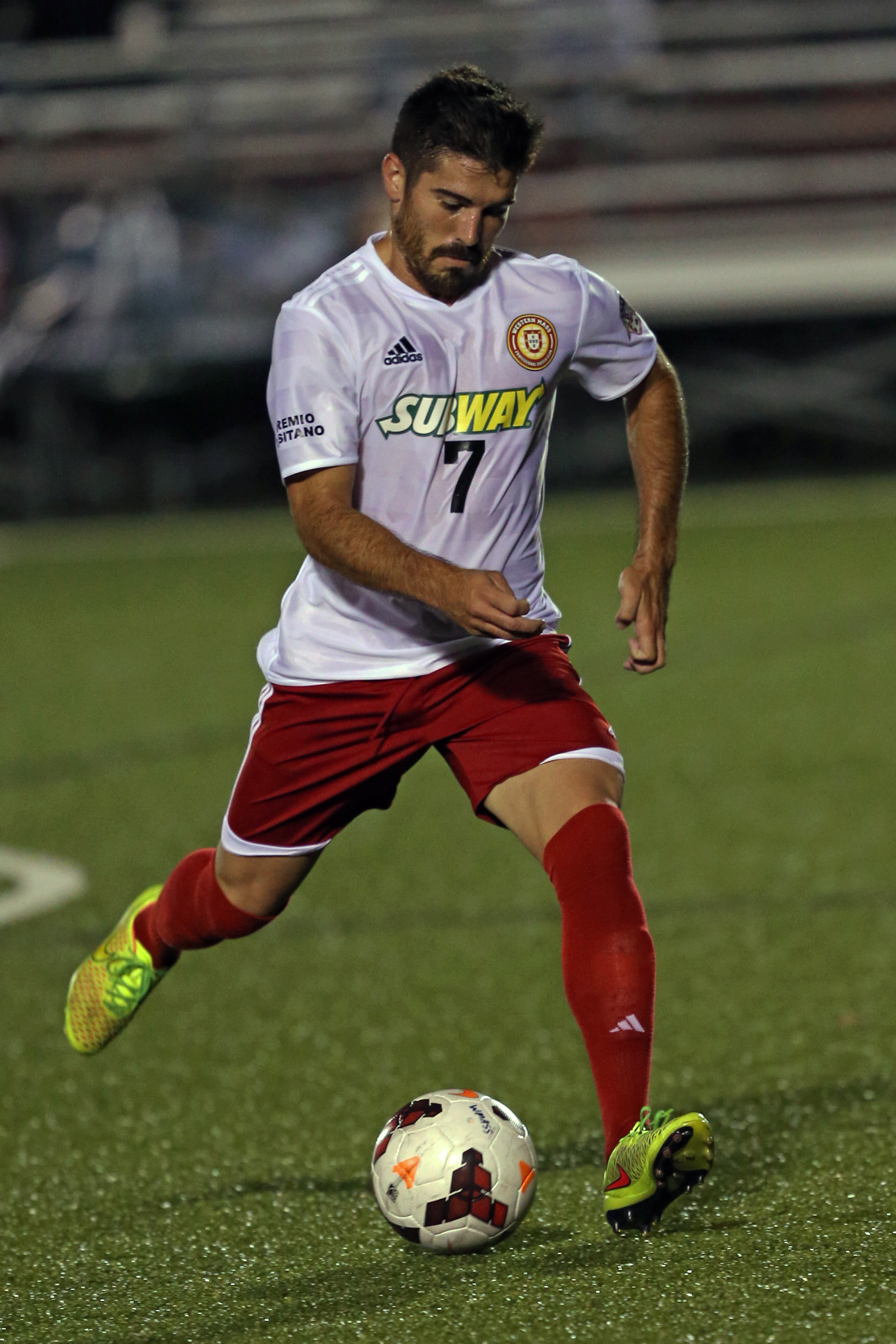 Western Mass, Rhode Island, and Mass United are in action this season in the ASL.

After the solid but fruitless start by Rochester the two teams traded midfield control, corner kicks, and chances. During a period of concerted attack from Montreal, and while Alex Dixon was on the sideline receiving treatment on his left eye, left back Onua Obasi picked the ball off of Fabio Morelli, sprinted past Beland-Goyette, and was able to send a hard cross through the box. Midfield Mike Garzi got on the end of the cross but his shot from the top of the area was blocked by Montreal's defense. The ball fell into the path of Johnny on-the-spot Mendoza and the second-year attacking midfielder dropped a floated shot into the upper corner of the near post for his first goal of the season and the Rhinos' first goal of the game.

In the 40th minute, Rolfe received a pass from Kenardo Forbes in the midfield and drove to the endline before cutting a low cross in for Dixon. The former Houston forward tried to recreate his goal against Pittsburgh from last week but his shot at the near post was collected by Paulmin.

The beginning of the second half was rather drab as Rochester conceded the midfield but Montreal couldn't exploit the sleepy play. In the 65th minute, Dixon received a long throw from substitute left back Drew Ruggles and sprung a quick break. Dixon beat two defenders and bore down on goal before Franck Zoue decided to foul him outside of the penalty area. Zoue was the last defender and prevented a clear goal-scoring opportunity, thereby earning his straight red card. Tony Walls was unable to replicate his free kick goal against Pittsburgh but the man advantage paid off for the visitors.

Just four minutes later, Mendoza cut an opponent in the center of midfield before driving forward and finding Dixon in the channel. Dixon dribbled past a man and sent a low ball into the box towards substitute forward Christian Volesky. Volesky has received and fashioned himself so many chances in the first two games of the season but was completely unmarked standing inside the six-yard-box. The former Portland Timbers draft pick had time to take a touch before firing his shot home from five yards out to double Rochester's lead.

In the 71st minute, the Rhinos finished the game off. Substitute left back Drew Ruggles hit a ball up the flank to Christian Silva, who did well to fill into that space from his defensive central midfield position. Silva hit a ball in from the left that Dixon did well to flick on from wide of the near post. Volesky was on hand to control that click and tap home his second, and the team's third, goal of the game.

Fourth-year goalkeeper Brandon Miller has been a new man for the Rhinos this year. He has been fearless diving in to grab the ball of a forward's foot and has commanded his area well. Miller particularly strong in sequences at the end of both halves, maintaining his team's lead. Having played back-up to Kristian Nicht and John McCarthy, Miller has showed he is more than ready to take over the heavy mantle of Rochester's starting goalkeeper with two clean sheets in three games.

As Sofiane Benzaza and Joey Alfiera, the two broadcasters from Montreal for the match, remarked after the game, "It's a building process for FC Montreal." That sums up the audacious approach from the Montreal team that featured no MLS loan players against Rochester.

Rochester's own loan contingent in the matchday squad, Tyler Rudy, played fifteen minutes in the match after the Rhinos had gone three goals up. Rudy is a natural defensive minded player but showed up on the right wing against Montreal. Timi Mulgrew has yet to debut for the Rhinos since joining the team on loan last week alongside Rudy.

The Rhinos are still undefeated on the young 2015 USL season, 2-1-0, and have only conceded once. Rochester's next game is on Thursday on the road against expansion side Louisville City FC.