The Rhinos traveled to Red Bull Arena and started well but ultimately settled for a scoreless draw to open the 2015 USL season.

During the first half hour of the game at Red Bull Arena it seemed like only a matter of time before Rochester broke the deadlock. The number of and quality of the chances that the visitors created suggested that they might run over the New York Red Bulls II. Despite that promising start, a change in style from the home side in the second half stymied Rochester's possession and the two teams finished scoreless.

Rochester produced a number of highlight reel moments in the 2015 USL season opener. Christian Volesky was the best Rhinos player in the run of play. The rookie forward got in behind the NYRB II defense multiple times but Homegrown goalkeeper Santiago Castano came up with a series of huge saves. 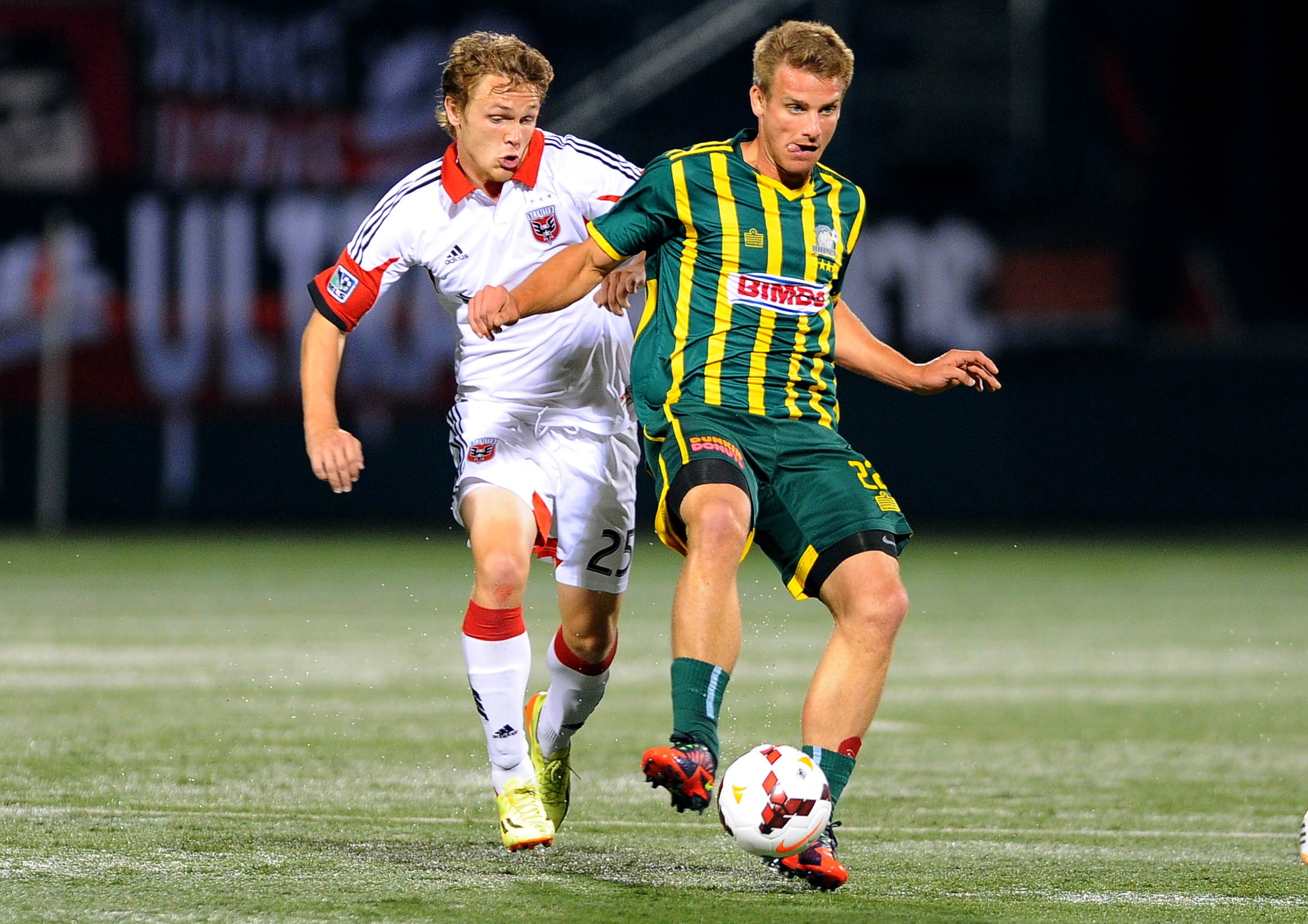 Ahead of their season opener against NYRB2, the Rhinos have made their signings and cut the other trialists.

Volesky excels at a poacher's role, playing in a pocket of space just off the shoulder of the opposition's centerback. The Southern Illinois University product took advantage of the inexperience of his opponents but couldn't find the back of the net.

Second-year-Rhino Johnny Mendoza looked to pick up from where he left off in the team's final preseason game. Against Syracuse, the Colombian-American winger had three assists off of set pieces and his service against NYRB was equally dangerous.

Mendoza repeatedly created chances for his teammates to score from corner kicks in the first half. A notable opportunity saw Tony Walls attempt to poke home a Mendoza corner after Castano was stuck in no-man's-land but right back James Thomas cleared the ball off the goal-line.

Center referee Ryan Dos Reis pointed to the spot after Mike Garzi won the ball from Victor Manosalvas in the area. The 18th pick in the 2015 MLS SuperDraft, Leo Stolz stepped up to the spot but hit a very weak penalty to his left side. Fourth-year Rhinos goalkeeper Brandon Miller dove to his right and easily stopped the penalty attempt.

By the end of the first half, Rochester head coach Bob Lilley was looking for ways to rejuvenate his side's stagnating attack. After NYRB II center back Konrad Plewa went down with a leg injury, Colin Heffron pinched over to the middle from left back and academy player Marcello Borges entered the game at full back. Immediately Lilley swapped Alex Dixon, a more attack-minded player, to the right side for Mendoza in order to take advantage of the young player's inexperience and cold legs.

Rochester had the better of possession and had created more quality attacks but NYRB II had the best chance of the first half from the spot. In the second half, the home side came out with a different mindset. The young Red Bulls players showed cohesion in a higher pressure system when they lost possession. This tweak forced Rochester's midfielders to play passes back to their defense and the defenders were prone to mistakes.

NYRB II created chances from their high pressure in midfield and gradually took the game by the scruff of the neck over the course of the second half. Whereas Castano was under a constant barrage in the first frame, he had little to do in the second. The home side wasn't exactly getting shots through to Rochester's Miller, however, as the visiting defenders made vital interceptions and interventions to prevent shots on goal.

Santiago Castano was standing on his head during the first half and Lilley made a number of attacking substitutions late in the game in attempts to recreate that situation. Marcos Ugarte, Kenardo Forbes, Asani Samuels, and Duba all entered the game in the second half to try to kick-start the visitor's attack to no avail.

Captaining the side on its season opener, returning defender/midfielder Tony Walls was a vital player for the Rhinos in the middle of the field. Walls showed a great example of simple veteran defensive play came amid a period of sustained attack by NYRB II. Haitian U-20 winger Derrick Etienne was winding up a rebounded shot after the ball pinged around the penalty area when Walls used his stocky frame just enough to set the attacker off without conceding a penalty.

This crafty physical challenge is indicative of the quality defensive play the Rhinos are known for under Bob Lilley. If the team can work on finishing Mendoza's corners or developing options when Volesky breaks through the defense, Rochester can find success during the 2015 USL season.