Jermaine Jones says he will not return to New England

Share All sharing options for: Jermaine Jones says he will not return to New England

The signs have been pointing to this outcome for months. From the moment Jermaine Jones put his hands on Mark Geiger in last season's playoff loss to D.C., New England Revolution fans have feared the inevitable. Confirmation was not available until today.

According to SI's Grant Wahl, Jermaine Jones has said that he will not return to New England at this point.

Thus (probably) ends a tumultuous saga that polarized the fan base and bubbled over to social media more than once. In his Insider Notes piece for Planet Futbol, Wahl relayed that Jones and MLS are far apart on money (contracts are negotiated by the league), but Jones would be willing to remain in MLS if the contract is right and the club is closer to the West Coast, near his family. 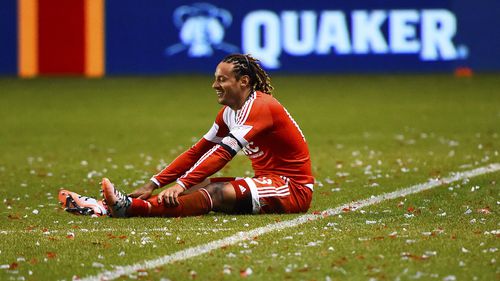 The Revolution are known for making solid player transactions with a variety of MLS mechanisms. But are they really about to lose their best Designated Player in team history for nothing?

Jones reportedly doesn't feel respected by the league, especially after participating in the blind draw two years ago. This is something we've heard before.

Wahl has a league source that states the two sides are far apart, but if a deal can be reached, they would push the Revs hard to make a deal for Jermaine's rights. Whether or not that happens remains to be seen. The roster compliance deadline is next week.

With that, the future of the midfield foundation is clear. Look to see Gershon Koffie and Scott Caldwell anchoring the engine room for most of this season. If the prevailing wisdom on Koffie's contract status and European ambitions are true, he will likely leave after 2016, with Xavier Kouassi ready to slide in, and Zachary Herivaux waiting in the wings.