The Revs should trade up to draft Joshua Yaro

It's time to make a splash.

Share All sharing options for: The Revs should trade up to draft Joshua Yaro

The New England Revolution need to make a splash this off-season and one possibility is to go after Georgetown defender Joshua Yaro.

Yaro recently signed a Generation Adidas contract, making him eligible for next Thursday’s SuperDraft. The California native has been a stud throughout his three-year college career. As a freshman he was named to the NSCAA/Continental Tire All-Northeast Region Second Team. One year later he earned first team honors. As a junior he was a unanimous pick for BIG EAST Defensive Player of the Year. 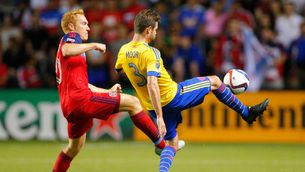 There have already been a lot of transactions this MLS offseason, and the TBM staff think a few of them could've improved the Revolution.

Yaro considered entering the professional ranks last season but decided that the timing wasn’t right. This year he's projected to go number one.

So, how could the Revs, who have the 10th overall pick, grab Yaro? By trading the rights to Jermaine Jones.

On Dec. 18, Jones stated that the Revs made an offer that was less than 20% of what he made last year. This was something that the Designated Player wasn’t too happy about. As a result, it might be best for the two parties to go their separate ways.

For the Revs to get any value out of Jones, an MLS trade would have to be devised. Although they're an Eastern Conference foe, the Fire might be the perfect destination.

It would be an interesting trade as the Fire were on the losing end of the blind draw that brought Jones to Foxborough in 2014. That said, it could work since Chicago needs an unrelenting defensive midfielder, especially after losing Jeff Larentowicz to the LA Galaxy. Jones would also bring experience to a relatively young team.

Let’s not forget that Jones is still a marketable figure. While not as young as he was when he first signed with the league, the midfielder is a US National Team regular and an entertaining presence on social media. He’s the go-to quote whenever he’s in the locker room.

Jones himself even stated that he would be open to joining the Fire during a recent Periscope session. The 34-year-old, who's looking for stability during the final stage of his career, also mentioned he would like to stay with the Revs.

In return for receiving Jones (and possible some Allocation Money and/or draft picks), Chicago would send the first overall draft pick to the Revolution. This, of course, would be used to acquire Yaro, who’s projected as a right back or defensive midfielder at the next level.

The move would be good for Yaro as head coach Jay Heaps has shown a willingness to give significant minutes to young players. Furthermore, right back is a position of need for the Revs, which means Yaro could start immediately.

It’s hard to know if Chicago would go for this deal. After all, Jones is coming off an injury-laden season. If he’s fully recouped though, Jones could be a dominating force in the center.

Conversely, the Revs would be taking a bit of a risk by grabbing Yaro. While big expectations have been placed on him, it’s impossible to know how college players will do in MLS. For every Cyle Larin and Andrew Farrell there’s an Andrew Wenger and Omar Salgado.

The New England Revolution need to make a splash this off-season and they could do a lot worse than going after Joshua Yaro.