USL stand-out defender Josh Phillips will join the Revs for a preseason trial, according to multiple sources.

USL stand-out defender Josh Phillips will be a preseason trialist for the New England Revolution, according to multiple sources. 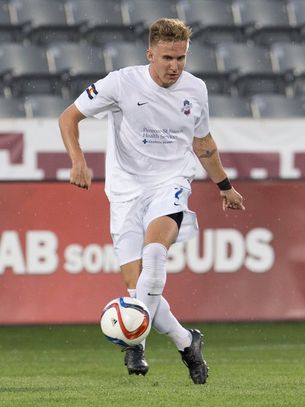 Phillips spoke to TBM after his first trial with the Revs.

Phillips, who most recently played for Colorado Springs Switchbacks FC (USL), trialed with the Revs in Fall 2015. The 24-year-old obviously showed enough to be welcomed back for a second stint.

Phillips spent the last two years in the lower divisions of American soccer. In 2014, he played ten games with FC Tucson of the PDL. A year later, the Washington native linked up with the Switchbacks where he made 23 appearances. Here, Phillips earned several Team of the Week honors.

Phillips is capable of playing anywhere along the back line, though he's most comfortable in the center. The right-footed defender spent most of 2015 as a left-sided center back.

Should Phillips earn a contract with the Revolution, he would be following a similar path as London Woodberry. Woodberry, who originally signed as a Homegrown for FC Dallas, joined the Revs last year after a season with Arizona United of USL. In his first season back in MLS, Woodberry offered two assists in 18 appearances.