Jerry Bengtson's time with the New England Revolution has come to a close as the two parties have mutually agreed to part ways, according to a team release. 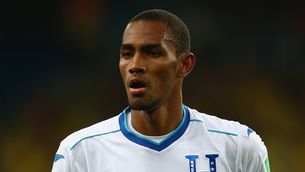 Days before parting ways with the Revolution, Bengtson told a Honduran media outlet that he didn't have a good relationship with the club.

Bengtson joined the Revolution in July 2012 as a Designated Player. The Honduran never found his form in New England, though he continued to produce on the international level. With only four regular-season goals in 36 appearances, the lanky striker was sent on a year-long loan to Belgrano in Argentina’s Primera Division last summer.

The change in location didn't affect matters as Bengtson still struggled to find the back of the net. In sum, he scored one goal in 15 games. He was ultimately sent home before his loan officially expired on Jun. 30.

Now in limbo, Bengtson is training with the Honduran U-23s in hopes of playing in this summer's Gold Cup. If he does make the final roster, a return to Gillette Stadium would be on the docket as Honduras plays Panama in Foxborough on July 10.

As for the Revs, they now have five forwards on the roster in Charlie Davies, Juan Agudelo, Teal Bunbury, Sean Okoli, and Timi Mulgrew. It is worth noting that the team currently has an intriguing attacking prospect in camp in midfielder Marvin Ceballos.