The Revolution have confirmed that Will Packwood will be joining them in training next week.

The MLS transfer window closes on May 12th, and it looks like the New England Revolution will not be content to sit idle while their defensive depth continues to be a concern. Will Packwood, a native of Concord, Massachusetts who has spent the last eight years in England with Birmingham City, will reportedly join the club for a trial with a view toward signing a contract prior to the deadline, according to BCFC's own website.

UPDATE: The Revs have confirmed that Will Packwood is scheduled to train with the club next week.

Packwood's release from Birmingham was announced yesterday, but today the West Midlands club has seen fit to clarify the situation. Apparently Packwood's contract was slated to run through June 30th (a normal arrangement), but it was terminated early at Packwood's request so he would have a shot at earning a deal before the May deadline. Otherwise, he would have to wait until the summer window opens in two months to make any sort of move.

Despite having represented the United States at the U-17, U-18, U-20, and U-23 level, and receiving a 2014 call-up to the senior squad without making an appearance, Packwood is not on the allocation list and therefore would not be subject to the allocation order. One would assume that the Revs have placed a discovery tag on him if his trial status turns out to be correct. He is eligible to represent the United States Under-23s at the Toulon Tournament in France that runs from the end of May until mid-to-late June. 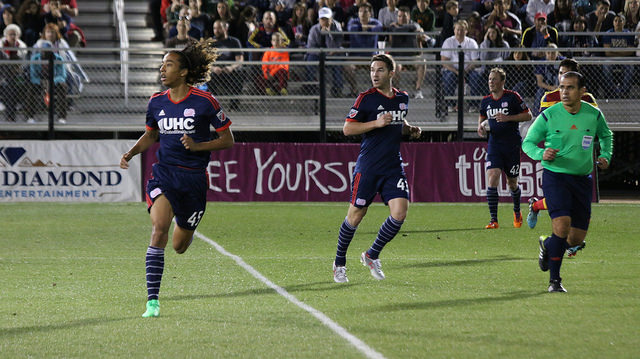 Born to an English father and an American mother, Packwood lived in Concord until 2007, when at age 14 he moved to England to join the Birmingham academy system. While in England, he made his first-team debut for Birmingham City in March 2012 and went on to make 21 first team appearances. He also went on loan three times, to Bristol Rovers (2013), Colchester United (2014), and most recently Cheltenham Town, where he scored his first senior goal.

At 6'3", Packwood clearly has the size to play center-back, but he has also featured at right-back and defensive midfield in his career. He provides the kind of versatility that the Revolution value in their back-up defenders, similar to what guys like Darrius Barnes, Jeremy Hall, and Stephen McCarthy bring or have brought to the table in the past.

That said, for a player who made his professional debut in the English Championship at age 18, he's going to have serious trouble breaking into the starting XI, though he may turn out to be a fixture in the gameday squads. He does, however, allow Jay Heaps the freedom of not putting Jermaine Jones at center-back if either Andrew Farrell or Jose Goncalves goes down with injury. Packwood's best chance at cracking the starting lineup would be at right-back, but that would assume a drop in play from London Woodberry, who has been fantastic since taking that role.

Including Jerry Bengtson, the Revs currently have 27 roster spots filled. Packwood would put the Revs at the maximum threshold of 28. Bengtson, however, is on loan at Belgrano, and one would assume is not long for this roster when his loan period is up at the end of June.

With the club now confirming that Packwood is joining the Revs for training next week, one has to wonder if the Revs have already made up their minds on the matter. They have until the end of the day on May 12th to make a deal, but if Packwood joins next week (logically, that means Monday), they will have two days to evaluate, negotiate, and sign the player. Not much of a trial, for sure.