The Rochester Rhinos have made very defense-oriented signings this offseason, taking on a goalkeeper, defender, and defensive midfielder from the Revolution in addition to other players. That trend looks set to continue, and they're even shedding attackers.

2013 Rochester Rhinos MVP Danny Earls has signed with the Pittsburgh Riverhounds, but you wouldn't know it if you don't scour roster pages in your spare time. Earls is also listed on the team's roster, though neither the team nor the league has mentioned anything about his signing. The versatile left-sided Irishman has played in a number of preseason matches over the past few weeks for the Riverhounds. 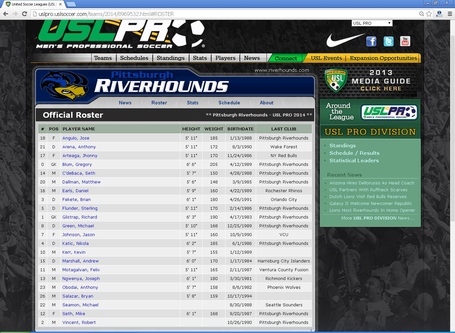 Makes one wonder why the best performer for the club over the past two seasons walked to rival team in the same league.

To his credit, Danny Earls showed well for the Riverhounds in a 1-1 draw on the road at defending champions Orlando City. Earls played as a left back and a deep central midfielder late in the game as Pittsburgh held on to its result.

Tyler Bellamy was signed by the Rhinos in 2010 during current head coach Bob Lilley's previous stint in charge of the club. Bellamy played in 70 league matches over his four seasons with Rochester but looks set to say goodbye to the Black and White.

Starting on the left side and going around the table (not counting friends and significant others) are Lance "Sunshine" Rozeboom, Tyler Rosenlund, J.C. Banks, Brandon Miller, Tyler Bellamy, and Matt Luzunaris.

It seems rather odd not to sign a guy who has proven his ability not only in this league but on this team considering that the team has only announced four defensive signings, including Jossimar Sanchez who is on loan from the Revs.

Rochester looks set to continue that trend, as on-trial defender Babacar Diallo will probably sign with the club this week. The Senegalese center-back has shown well during his training stint, and featured in the Rhinos' recent preseason shutout of the Montreal Impact U-23 squad.