The roster sections of both the Rochester Rhinos website and the USL Pro site include players that have not yet been announced. Among them: Revolution draft pick Pierre Omanga.

2014 New England Revolution Third Round SuperDraft (what was functionally the Supplemental Draft) Pick Pierre Omanga is listed on the Rochester Rhinos website as a forward on the roster. The team selected the 25 year old French forward out of Southern New Hampshire University with the 50th overall pick in the draft proceedings. Omanga now appears to join fellow Revolution draft pick Alex Sundly in Rochester, though Omanga was never signed by the Revs and will therefore not be on loan. 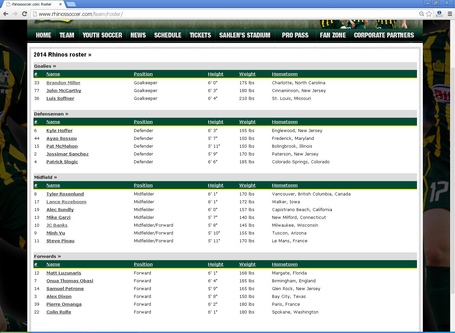 Last season the Rhinos signed forward Blake Brettschneider who had previously played with the New England Revolution but who wasn't a part of the affiliation partnership between the two clubs. Omanga appears to be another case of shared contacts rather than the loan affiliation deal between MLS and USL Pro.

Colorado Rapids academy product Patrick Slogic is listed by both the team and the league's sites as a rostered player for the Rhinos. Slogic graduated early from Cornell University this past December where he organized a backline that set a school record in defensive prowess with a .60 GAA. Slogic was a member of the PDL team Reading United which is making a name for sending quality players into the professional ranks. The 6'6" central defender was projected by many, including MLSSoccer.com, as a potential Colorado Rapids Homegrown signing.

A similar thing happened last preseason when I noted that both Blake Brettschneider and Matt Luzunaris were listed on the league's website as Rhinos' players before either the team or the league announced their signings.

While I noticed the players on the roster last year on February 12, the team announced introduced Luzunaris the next day on the 13 but didn't announce Brettschneider until the following week.

These two players should join up with the team's preseason training this week as Rochester kicks off its season on April 5 in Orlando. In the interceding 10 days, look for the Rhinos to prepare for the 2014 season and sign a couple more defensive players.