The star of the Rochester Rhinos in recent years is heading back to the Midwest to play for Minnesota United FC of the NASL.

Share All sharing options for: A Fond Farewell to Rochester Rhinos Star and Fan-Favorite J.C. Banks

J.C. Banks is easily the best field player the Rhinos have had during USL PRO. Banks was twice named team MVP, earned two All-League selections, and led the team in scoring twice. Over the years, Banks's form often acted as a weathervane for the team; in fact, the team was 16-1-2 through 2011 and 2012 when Banks was on the scoresheet.

As the face of the club, Banks developed a strong rapport with the fanbase and was the most recognizable Rochester player around the league. Banks told The Bent Musket that playing the first four years of his professional career in Rochester was very important for him and that he has a lot of happy memories from that time. 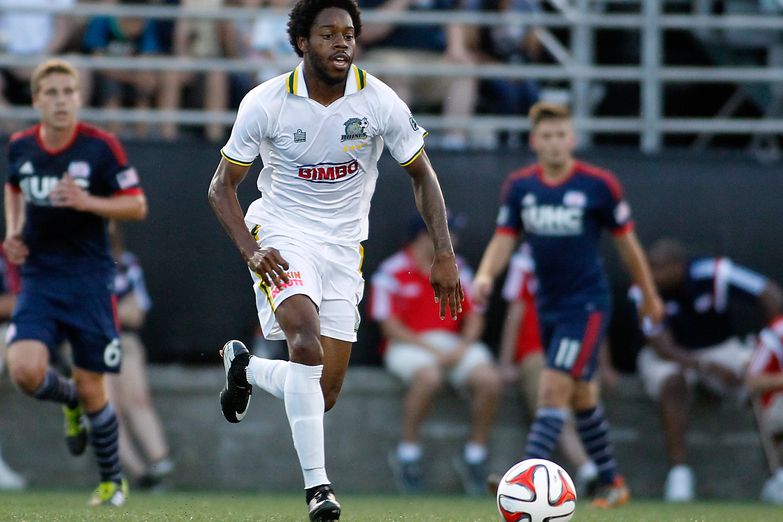 The Rhinos have exercised options to keep 10 players from the 2014 roster.

By joining Minnesota United FC, Banks reunites with former Revolution and Rochester left back Tyler Polak, who played for the Rhinos in 2013. Former Rhino Aaron Pitchkolan (2010) plays for MNUFC, while former teammate Connor Tobin (2011) played in Minnesota for the 2012 and 2013 seasons.

Banks spent a week or two training in Minnesota after Rochester's USL PRO season ended in mid-September. While he was there he spent a lot of time talking to Polak, who helped him get a feel for the locker room. Tobin, who spent 2014 with Carolina RailHawks, also told Banks great things about the team and the organizational staff at the club. "The organization as a whole is very forward-thinking and has eyes on the future," Banks said.

Minnesota United FC is a quality side for any American league and Banks must be licking his chops thinking about playing with Christian Ramirez and Miguel Ibarra. Ramirez was the 2014 NASL Golden Boot winner and Ibarra's strong play earned him a call-up to a USMNT friendly roster earlier this year. Banks said that Ramirez is a great goal-scorer and with that kind of tremendous talent up top, he is excited to set them up and grab some assists. That said, he doesn't see himself solely as a distributor, and Banks hopes to use his ability to read the play moving forward to net some of his own.

Banks now has the chance to score some of them against his former Rochester teammate Kristian Nicht. The German goalkeeper plays for Minnesota's hard-pressed Midwest rivals Indy Eleven and Banks told The Bent Musket that right after signing his contract he sent a text to Nicht warning him to watch out in 2015. It doesn't take much to get the big man riled up, but Banks is hoping that a few goals against Indy won't ruin their friendship.

It's not a stretch to think that Banks had accomplished all he could with Rochester in USL PRO as one of the league's best attacking talents over the past few campaigns. Fans should respect his decision to try a higher level and recognize that instead of signing with a league rival, he joined one of the strongest American teams outside of MLS in Minnesota United FC.

J.C. was the second longest tenured Rhinos player after central midfielder and club captain Tyler Rosenlund. He even did some recruiting work for the team, recommending former youth club, college, and pro indoor teammate and longtime friend Tony Walls. When the Rhinos announced it had exercised contract options on 10 players, including Walls, J.C. Banks's name was conspicuously absent. Banks said that while he had a blast playing alongside Walls in Rochester in 2014, as he does in the indoor game with Milwaukee Wave, he had to make the decision that made sense for his career.

Banks is the second 2014 Rhinos player to sign with another team after USL PRO expansion side Austin Aztex announced Lance "Sunshine" Rozeboom as its first signing in November. The departure of Banks leaves the Rhinos without an identifiable star player or a personality on the field. If Bob Lilley returns in 2015, his main off-season task will be to find an attacking midfielder/forward replacement.

The Minneapolis/St. Paul area is about four and a half hours away from his parents' home in Wisconsin and Banks said that he has already talked to his family about travelling up to see his games. Banks said the fact that in the NASL teams play all their games on the weekend (Minnesota plays 9 games on Saturday and 1 on Sunday) will help plan out trips.

He also mentioned that the fact that the NASL gives proper rest time between games was a major selling point in his decision to join Minnesota. Banks cited that the back-to-backs and two-in-threes that are still common in USL PRO were particularly grueling on an athlete's body and that the organized schedule in NASL provides relief and recuperation from one game to the next.

When asked if he had anything else he wanted to say, to get off his chest, J.C. said again that his time in Rochester was special. "It's a city and a team that I wouldn't be opposed to returning to in the future."

Rhinos fans have to stand up and applaud J.C. Banks for his tremendous service over the past four seasons, that is, right after wiping their eyes.