After taking the lead into halftime, the Rhinos fell apart defensively just after the hour mark to lose 3-1.

A two and a half hour weather delay could not put off the inevitable defeat the Rhinos suffered at the hands of the Dayton Dutch Lions. 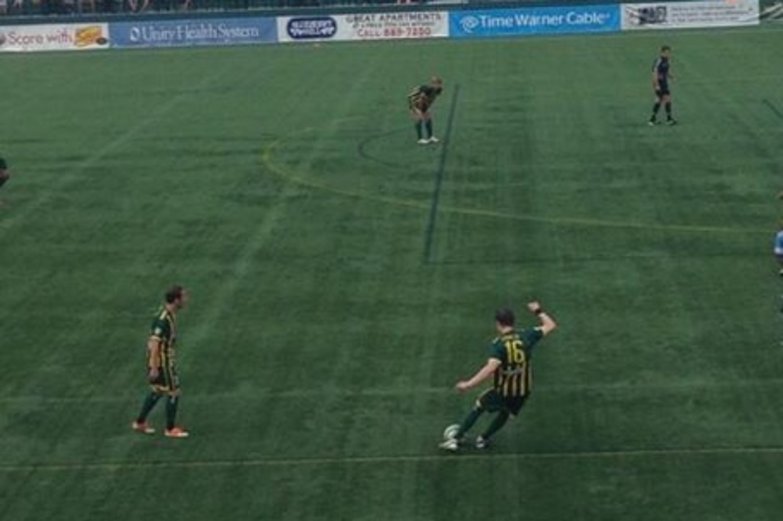 Danny Earls' strike provided the margin of victory for Rochester as they defeated Antigua Barracuda.

Rochester was not electric but was definitely the more active team in the first half of play. Earls crossed in towards Horth early but the Revs' loanee was outjumped by Dayton's defense. Banks played Brettschneider in at the near post but he couldn't control the ball before Dayton cleared their lines. Quebec-native Mayard was again hot for the Rhinos as he saw a shot hit off the far post from the right side. Former Revolution forward Brettschneider drew a foul 25 yards out from goal and Earls took the left footed free kick just over the bar.

The best chance the Rhinos created thus far in the game came in the 36th minute. Brettschneider took a lobbed pass off his chest to the left of goal and directed a low shot towards the far post. Dayton goalkeeper Sean Teepen got down well to block the initial shot but Mayard bounced on the follow-up. The former Canadian youth international saw yet another chance hit off woodwork before the keeper claimed the ball out of the air.

Danny Earls was again the driving force of the team as he pushed the play forward from left back. The Irishman was also on corner kick duty and one of his most promising came after Mayard had a shot deflected out in the 41st minute.

Rochester had its breakthrough in the form of a great shot from talismanic winger J.C. Banks. In the 43rd minute, right back Lucas Fernandez played a hugely hopeful long ball that Banks tracked through the air into the box. Banks coolly controlled the ball with the outside of his right foot so the 70-yard pass dropped right in front of him. With his back to goal, Banks touched the ball centrally and away from goal so he could turn and line up a left footed shot. And what a shot it was! From just outside the area Banks nailed his shot low and curling into the far post with his weaker foot. It was a brilliant strike from the most talented player to come through Rochester in recent memory.

Halftime stats favored Rochester in addition to the scoreline. The home side had the advantage in shots, 8 to 3, and corners, 3 to 1.

Ten minutes into the second half, interim head coach swapped Andrew Hoxie for Matt Horth. At this point the Rhinos still looked the stronger side and Rochester's coaching staff wanted The Big Smooth to snatch another goal off the bench to put the game away.

The hour mark of the match signaled the start of the worst 5 minute sequence I've ever seen from the Rhinos.

Dayton served a long ball into the box from a set piece near half field and a Rochester defender tried to knock it behind for a corner. As if the team's luck wasn't already bad enough, the attempted clearance found Dayton defender Gregory Preciado lurking unmarked at the far post. The Walla Walla, Washington, native made no mistake with his header past a scrambling Kristian Nicht.

Just two minutes later, Dayton turned the script on Rochester. Eli Garner drove into the box down the near side and cut inside to play a ball across the top of the six. Rochester's defense must have been playing with its eyes closed as no one could get a touch on the low cross and no one picked up the run of Brandon Swartzendruber who streaked down the center completely unmarked. The 28 year old American forward powered home his chance to the far post.

The rout was completed in the 65th minute. Gibson Bardsley nicked the ball off Roberts who wasn't decisive with his attempted clearance. As Roberts was the last defender, Bardsley was clean through on goal against Nicht. The imposing German goalkeeper came off his line but Bardsley showed his class with a deft chip over Nicht's head.

Coach Ercoli attempted to re-charge the squad by bringing on Tam McManus for Brettschneider, but just a minute after the substitution lightning striked over Sahlen's Stadium. Proceedings were delayed from the 67th minute for over two hours before the teams announced the end of the match.

With the loss at home against Dayton, Rochester are mathematically eliminated from the 2013 USL-Pro playoffs. This is the first time in the club's 18 year history that Rochester Rhinos are not in the postseason.

There had to be a first for everything and the team's luck never turned around this season.