Anatomy of A Blockbuster: How The Revs Were Able to Trade For Kei Kamara

The New England Revolution shelled out a lot of stuff for Kei Kamara, but where did it all come from?

Share All sharing options for: Anatomy of A Blockbuster: How The Revs Were Able to Trade For Kei Kamara

Before we take a bit of a trip down memory lane, let me start with this.

For all the flak the New England Revolution front office gets for their (perceived) lack of spending, the fans should give them far more credit for what they do better than anyone else in MLS.

And that is use trades, draft picks, waiver wires, blind draws, anything and everything at their disposal within MLS to acquire players that doesn't involve signing someone from the international market.

Look up and down the Revs roster, how many of these players were signed via an MLS mechanism? Far as I can tell, there's only three players the Revs have signed directly via the international market - Jose Goncalves, on loan defender Samba from Sporting CP and Xavier Kouassi when he's added to the roster. If you want to count free agent signing and former FC Dallas homegrown London Woodberry, that's four.

Literally everyone else on this roster arrived via the SuperDraft, Homegrown, waivers, a trade, etc. As far as I'm concerned, there's no one better at gaming the system better than Revs front office. No, the LA Galaxy don't game the system, they just literally ask MLS to invent new ways to let them spend money along the way and that's why no one likes them. But now we have Targeted Allocation Money thanks to LA, another resource for the Revs to use to get players.

The Revolution acquired Kei Kamara last week for the biggest, bestest, most MLS pu-pu platter extraordinaire ever, of all-time. General Allocation Money (GAM), Targeted Allocation Money (TAM), a 1st Round pick next year, a 2nd Round pick in 2018 and an international roster spot this year the Revs weren't using anyway. Where the heck did all this stuff come from? 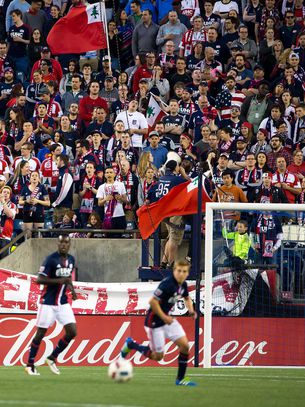 Let's start with the 1st round pick. The Revs had two 1st rounders next year thanks to the Jermaine Jones deal earlier this season. The Rapids got Jones' rights in exchange for their top pick and some GAM. With Colorado currently leading the Supporter's Shield race, the pick Columbus gets would be the highest of the two, in this case the Revs "natural" pick at 7th overall of the 1st round if the season ended today.

Other deals the Revs have made involving 1st round picks have been sending Benny Feilhaber to Sporting KC and in a separate move getting Teal Bunbury from SKC. We can debate the impact that the MLS SuperDraft has now, but these picks still are a trading commodity and the Revs make the most of them more often than not.

The next two deals are far sneakier, and one pissed of Bruce Arena so that makes it extra special. Last season the Revolution got $50,000 in allocation from the LA Galaxy for the "Discovery rights" to Sebastian Lletget and then repeated the feat in preseason this year when keeper Charlie Horton was dealt in a sign-and-trade with DC United. While the GAM amounts aren't official, theoretically that's $100K in free allocation for calling dibs on two young players in case they came back to MLS. Far as I can remember, the Revs are the only team to benefit from two discovery signings like this.

If we factor in all these deals together, I think of the Kamara trade in a slightly different way. It's really a "three team deal" where the Revs get Kamara, the Rapids get Jones and the Crew get a whole bunch of MLS stuff. Are the Revs perhaps out some TAM and a 2nd round pick, as well as that mostly meaningless International roster spot? Sure, but by acquiring all of these resources over time, it gave the Revs the ability to pull off an almost unheard of trade in MLS. And looking back on it, with the Revs one of the few teams not at the Designated Player limit, there probably weren't a lot of places Kamara could land via trade anyway.

Now, Adam Sell wrote up a solid post on why the Kamara trade was bad, and he brings up two pretty big points. The first, with Xavier Kouassi eventually getting added to the roster, the Revs will be at three DPs, thus limiting their flexibility to add a big time player in the near future. But the second, and far bigger/important point, is now the Revs are likely at the max of the MLS salary cap. This means using what GAM/TAM funds the team has to buy down contracts to possibly get under the cap rather than going out and getting new players. Also, it stands to reason that the Revs' front office "War Chest" is probably very light at the moment but in the short term I'm okay with these issues.

Essentially, the core of the Revs team is locked up long term. Nguyen, Tierney, Caldwell, Kamara among others all have multi-year deals. With the salary cap increasing the next few years overall, there might be a little more flexibility than you might think if the Revs need to add a specific player going forward. There's a ton of youth on this team  as well, and that's even before we get to rookies Jordan McCrary, Michael Gamble and Femi Batman Hollinger-Janzen who all could be significant contributors in the seasons to come.

Getting Kei Kamara now, at the end of the primary window with the Revs struggling a bit out of the gate, is essentially a win now move.

It's a very un-Revolution like move in that the team just acquired a big money contract, and at the same time the most Revolution-esque move possible

Similar to the Jones trade back in 2014, the Revolution front office and the team are hoping that gets the Revs back over the hump and to perhaps their sixth MLS Cup appearance. This could be the move, and of all things, another MLS trade, that turns this well built team of mostly MLS acquired players into a threat to win it all. It's a very un-Revolution like move in that the team just acquired a big money contract, and at the same time the most Revolution-esque move possible: using what MLS gives you to get what you need.

Earlier this season New England used a 3rd round pick to get Je-Vaughn Watson from FC Dallas and sent GAM and TAM to Vancouver for Gershon Koffie. Both players have been entrenched in the starting lineup since the beginning of the season and even if both are with the Revs for the short term the Revs will get more than enough value from both players on the field to cover the cost of acquiring them.

Because no one, and I mean no one, works the MLS mechanisms better than the New England Revolution. Which is why, regardless of how the Kei Kamara trade rumors started flying or Kamara's media dustup with Federico Higuain, New England was going to be on the short list of places Kamara could wind up. Does that mean I still nearly fell out of my work truck when I read the news on my phone last week? No of course not, I was as shocked as everyone else. Not because the Revolution made the move in the first place.

But because I didn't think it would be possible to do this kind of a trade without giving up a player on the roster. And the Revs certainly have players that would have lots of trade value and it's possible that in the offseason the team moves a player to recoup some of the resources they spent to get Kamara.

Right now, the Revolution are moving forward with the bulk of the core of their team still intact and they've added arguably one of if not the best pure target strikers in the league. There's still a long way to go in the regular season, but the Eastern Conference in particular is wide open.

It was always likely the Revs were going to be a playoff team this year, but we can't say that this team hasn't improved from last year anymore. Losing Jermaine Jones in the midfield hurt, and while he's scoring at will in Colorado, he likely wouldn't be doing that from the holding midfield spot in New England. Kei Kamara's going to score a few goals for the Revs, maybe even a lot of goals, and take the Revs from middle of the pack to threat in the East.

Unlike the last major move, you can't say the Revs got lucky and won a blind draw this time. This front office put themselves in a position to make one of the biggest trades in league history, and luck had nothing to do with it.

I'm not sure that acquiring GAM, TAM, and other MLS stuff is a skill or a talent, but I do know which front office I'd want doing the spending.