As always, the Revolution didn't play badly for most of the night, but for the seventh time in 2016 they don't have a win to show for it. This is a problem.

Share All sharing options for: Three Thoughts From Revolution's 3-0 Loss At DC United

So yesterday's 3-0 loss to DC United was not the best game for the New England Revolution. Like many games in 2016, they started off well, failed to score and then bad things happened. Chris Tierney went down with an injury, Je-Vaughn Watson committed another penalty when he switched over to left-back and then Luciano Acosta did something disgustingly good.

The Revs offense desperately needs to break out, but they play twice this week and could face some interesting decisions in the personnel department.

1. Chris Tierney Is The Most Important/Best Left Back in MLS

And if he's out long term with a hamstring injury, this would be very bad for the Revs. Not only is it the one position they don't have a true back up for (unless we cue up Donnie Smith's music for his annual one start) but it's almost a system breaking loss for Jay Heaps and his 4-2-3-1.

Once Tierney went out the Revs had almost no presence attacking down the left. This makes the New England attack very one dimensional and predictable as most of the service will come from the right and against a packed in DC defense holding a lead the Revs were always going to have trouble scoring. Lee Nguyen and the rest of the attackers tried and had a few bright moments in the final hour, Diego Fagundez's 1-2 "Around the World" routine comes to mind, but they rarely tested DC's keeper Travis Worra.

I don't want to say that the Revs gave up after the Tierney injury and then Watson's penalty giveaway, but it certainly took the wind out of the sails which is understandable to a point. The Revs never seemed to adjust on the left side without Tierney and have never been the best at breaking down packed in opponents anyway. Bad luck and bad finishing put the Revs in a hole and they weren't able to adjust, which just compounds the frustrating nature to the first thirty minutes and the Revs' inability to score.

Early options to replace Tierney midweek basically come down to Watson or Barnes, as I don't think it's a good idea to start Smith against the defending MLS Cup Champs on short preparation. This is the one position the Revs can't afford to have an injury and right now panic button for the 2016 Revs season could come down to how serious the injury to Tierney's hamstring is. 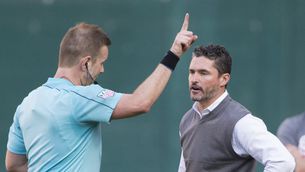 New England wasted another good start to the game before an injury and a penalty put the Revs in a hole they could not dig out of.

2. The Revolution have scored 5 goals in their last 7 games.

They've also been shut out three times this season and twice by DC United and while yesterday's scoreline might flatter the home team as far as their overall performance, the bigger problem for the Revs is just not hitting the target.

New England has had shooting performances of 3 shots on target out of 13 at DCU yesterday, 6 of 20 at Orlando, 8 of 13 vs. Toronto, 5 of 15 against RBNY and 5 of 11 at NYCFC. The Toronto game aside which should've been a win for different reasons, the Revs have just been mediocre at best at getting shots on frame. It's not from lack of effort or ball movement either, the Revs offense is still dominating in the final third and out passing their opponents in that area, it's just not translating to high quality chances or shots. And that needs to change, quickly.

Teal Bunbury has done some good things, especially with his back to goal, since being moved up to striker but if Charlie Davies can't go 90 minutes and Juan Agudelo is out then the Revs have a tremendous depth problem that needs to be addressed. Before the summer.

This might be a little nit picky, but it's something I've complained about most of the season. I don't like the lack of versatile options on Jay Heaps' bench. Guys like Darrius Barnes and Steve Neumann who can play a variety of positions are being left out in favor of Sambinha and Zachary Herivaux which is fine, except for the fact that every sub Heaps makes is predictable.

London Woodberry is always going to be the first defender off the bench, Daigo Kobayashi is going to be the first central midfielder off the bench, etc. By leaving versatile players off the bench entirely, Heaps is almost handcuffed to doing certain things at certain times and it makes adjusting to the Revs new personnel very easy. Yesterday would've been a perfect time to try two strikers and take pressure off the fullbacks from doing attacking work, and as much as I hate the diamond midfield and Gershon Koffie operating as a lone CDM is probably a yellow card waiting to happen, it was time to try something different under bad circumstances to get a result.

Instead, Heaps stuck to his guns and got burned late. His team tried hard and had some bright moments but never looked like a great scoring threat outside of the first thirty minutes. A double game week coming up means less of a chance to tinker but perhaps more of a chance to rotate in some players for a rare start or some minutes off the bench.

What did you notice about yesterday's game? Leave your thoughts in the comments below.