Kelyn Rowe is a very talented midfielder, but should he be starting next to Gershon Koffie for the Revs over Scott Caldwell? No.

Just so everyone is very clear, I like Kelyn Rowe and he is very good at soccer.

But he should not be playing in a defensive midfield role for the New England Revolution, especially if Scott Caldwell is available. This was the case for the season opener last Sunday in Houston where Jay Heaps started Gershon Koffie and Rowe behind Lee Nguyen in the center of the midfield.

Also, to be very clear, Kelyn Rowe did not have a terrible game despite coming off at halftime with a knock. An update at practice yesterday makes it seem like Kelyn will be fine and could be available to play against D.C. United this weekend, which is good news. It's tough to jump to conclusions after one game, but this particular case is pretty obvious.

Rowe against Houston completed 73% of his passes, made five interceptions and didn't commit a foul. On the surface, there's nothing wrong with that performance. Rowe and Koffie played in preseason games with each other as holding midfield partners so this wasn't some completely shocking concept.

But at the same time, it was. Because that meant keeping 2015 Team MVP Caldwell who made 32 starts last season on the bench. And while Rowe personally did fine, the team as a whole seemed to struggle in the first half.

#NERevs passed at just 62% in the first half. Too many sloppy turnovers. #HOUvNE pic.twitter.com/mW5yJCbGzw

Those are not good passing numbers, not helped by horrendously bad days from Chris Tierney and Jose Goncalves, who both were under 50% completion rates in the first half. This is not to put the blame on Rowe for not being able to link up with the backline, but perhaps the Revs adjusting to Rowe's positioning on both sides of the ball.

Rowe's passing was fairly accurate but also very safe, and most of them came from inside his own half. So when three of your misplaced passes happen in your own defensive half, that's not good. Considering Caldwell only missed on two passes all night, one a deep long ball, the difference when looking at the chalkboards are very clear.

With Rowe shading to the left and the left side of the backline launching clearances and long balls forward, Houston was able to dominate the first half possession. What the Revs needed, and didn't have in the first half, was a consistent outlet in the middle of the field that helps take the pressure off the defense and transition the ball forward to the attackers.

When the Revs are on the counter attack, they're one of the best in MLS at creating chances, but when they do have good possession days, it's because Caldwell is one of the best recycle passers in the league. Scott helps keep the ball in the attacking half and provides an outlet for the attacking players as they look to break down defenses. This is why Caldwell racks up touches and high passing accuracy all the time, and his 34 touches and 93% passing rate bested Rowe at 25 and 73% against Houston.

Almost all of Caldwell's passes are in the attacking half, with two banks of green arrows at midfield and another at the top of the attacking third moving the ball from side to side. It's this kind of passing and positioning that helps the Revs maintain pressure on defenses, and leads to goals like Daigo Kobayashi's equalizer against Houston.

Rowe Recovering Well From Injury Ahead of Home Opener 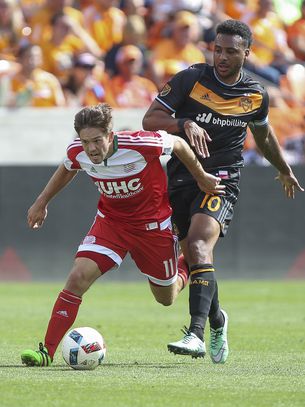 Jon Sigal gets an update from Jay Heaps about Kelyn Rowe's status for this weekend's game after the midfielder left the season opener with an injury.

If Rowe is going to be a consistent option as a holding midfield, he's going to have to bring something to the position that Caldwell doesn't. Rowe, being the better pure attacker, should be carrying the ball forward when he can, helping to either start counters creating space for other players to move into. Rowe wasn't credited with any dribbles and was dispossessed once, in his own half.

Again, Rowe didn't have a bad game and it was a shame he had to leave due to an injury. But to say there wasn't a noticeable improvement from the Revs as far as passing and possession go in the second half was an understatement. The Revs finished the game with 73% passing and 48% possession, up from 62% and 37% respectfully in the first half. Obviously, the miscommunications in defense that lead to the Revs conceding three goals doesn't fall on Rowe at all but the second half the Revs were a completely different team with Caldwell on the field offensively.

I understand Jay Heaps wanting to find as many minutes as possible for players like Rowe, who's very talented and is a starting quality player. There will be days where Rowe can start out wide in place of Diego Fagundez or Teal Bunbury or even in the middle for Nguyen and he should get lots of minutes off the bench when he's not starting. I'd be all for trying a midfield with Rowe next to Lee in a 4-1-4-1 that the Revs have used in the past as well.

But starting Rowe over a healthy Caldwell as a holding midfielder is not a viable option for this Revs team. While Rowe was not as disastrous as A.J. Soares in the same position or Jermaine Jones at centerback, it's also a move I wouldn't call a success either. With a different/late game situation or injuries, I would be okay with Rowe playing minutes as a deeper central midfielder? Sure. But as a starter over Scott Caldwell? Not a chance.

Another reason I didn't like this move was it limited Heaps' options off the bench. With Caldwell, Kobayashi and Zachary Herivaux all listed as substitutes, there really wasn't a second true attacking option for Heaps late in the game. Juan Agudelo had already come on for Teal Bunbury, which left Kobayashi as the last sub for Gershon Koffie in the waning minutes. While that last sub worked out really well, and there's never a bad time to but Daigo into a game, having three holding mids didn't make sense to me. If Rowe is going to be a starter, you have to replace his versatility on the bench as well, so I was surprised not to see Steve Neumann on the subs bench.

The Revolution did claim a very good point in Houston, a place that has usually been a horror show for New England so I have few complaints about the result itself. How the Revs got that point however, left a little to be desired, but the overall defensive lineup won't and shouldn't change that much. The errors that lead to Houston scoring three times are fixes that will happen at the team level, but the one immediate change to the lineup for this week is very clear.

Scott Caldwell should be back in the starting lineup.