2016 State of the Roster: Have the Revolution Improved From Last Season?

This offseason, the Revs made a handful of quiet-but-purposeful acquisitions. Is the club in better shape than it was a year ago?

Share All sharing options for: 2016 State of the Roster: Have the Revolution Improved From Last Season?

The Revolution approached the 2016 offseason with purpose and intent. The club didn't chase aging free agents or yield to Jermaine Jones' contract demands; instead, it made subtle acquisitions in the form of Xavier Kouassi, Gershon Koffie, Sambinha and Jordan McCrary, among others.

But have the Revolution improved enough? Will these moves make the club a contender in the Eastern Conference? We look deeper.

The Revolution retained its core players, minus Jones, ahead of the 2016 season. In fact, the clubs' roster and probable Starting XI have not changed dramatically over the past four months. Key changes in the midfield and along the back line make the difference.

Here's a breakdown of what was (navy shirts), and what's to come (red shirts):

Have the Revolution Filled Its Key Roster Holes?

Heading into the offseason, the Revs had two objectives to accomplish: solidify the holding midfield spot by re-signing or replacing Jermaine Jones, and bolster the back line with one starter and at least one depth piece.

The club accomplished the former by signing FC Sion captain Xavier Kouassi and trading for Vancouver Whitecaps standout Gershon Koffie. Even though Kouassi won't see the field until at least August, he will replace Jones as a strong, physical tackler who covers a lot of ground in the middle of the park. He's unproven in MLS, but is an established winner at the highest level in Switzerland. 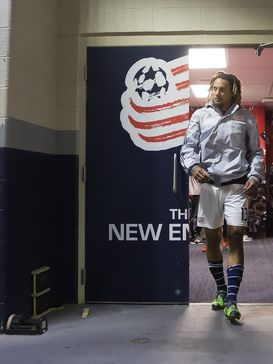 The Jermaine Jones era has seemingly come to an end in Foxboro.

Koffie, on the other hand, has a proven track record in MLS. The Ghanaian-born midfielder made 133 appearances for the 'Caps over the past five seasons, contributing nine goals and seven assists. In 2015, Koffie put together a defensive stat line comparable to Jones': 2.79 tackles, 2.61 interceptions and 9.04 recoveries per 90 minutes, compared to Jones' 2.81/3.22/7.00. He'll bring balance to the holding spot, offering the ability to push forward on the dribble or stall the opposing attack with a physical challenge.

The opportunity to bring Koffie off the bench, assuming Kouassi earns a starting spot when healthy, would serve as a luxury for Heaps. Consider Jones replaced.

Along the back line, the Revolution acquired a pair of promising defenders in Sporting CP loanee Sambinha and North Carolina product Jordan McCrary. Sambinha—a big, strong, prototypical center back—will bring much-needed depth behind Andrew Farrell and Jose Goncalves (let's not forget that Jones served as the Revs' third center back last season, following the injury to Darrius Barnes). Sambinha does, however, join Revs with a less-than-elite resume, having only played in Portugal's third division (2011-2012) and later its top flight, but with Sporting's reserve squad (2013-2015). He will likely need more polish before earning significant minutes.

McCrary, on the other hand, may earn a starting spot out the gate. The young defender will provide blistering pace, a knack for spinning accurate crosses into the box and proven 1v1 defending skills. Yet McCrary, like Sambinha, comes with question marks. He missed the 2014 season with a torn ACL. He benefited from a stellar defense and supporting cast at UNC. And, of course, he has yet to prove himself at the professional level.

Both McCrary and Sambinha could evolve into regular contributors. But on paper, neither defender takes the Revs' back line to the next level.

Have the Revolution Improved From Last Season?

As Eastern Conference foes like Toronto FC and Columbus Crew SC reloaded ahead of the 2016 season, the Revs made a few calculated moves that helped maintain the status quo. Kouassi and Koffie will replace Jones. Sambinha will add depth. McCrary will fight for a spot in the Starting XI. But none of the players acquired this offseason figure to take the Revs from a knockout-round loser to an Eastern Conference winner.

To experience growth this season, the club must use the summer transfer window to continue building a championship roster. That means signing another DP, a move team president Brian Bilello already plans to make. Look for the Bilello to target an attacking midfielder or wing back this summer.

Until then, the Revs will seek to surpass expectations, riding a purposeful, intentional offseason into Sunday's 2016 season opener.

*Kouassi will join the Revolution in July, but is expected to miss an additional 1-2 months while recovering from an ACL tear.