The MLS season is upon us and we still don't know where Jermaine Jones will land.

We are days away from the start of the 2016 MLS season and we still don't have a resolution for the Jermaine Jones saga. Jones' initial 18-month contract is now over, leaving the former New England Revolution Designated Player without a home. Will he return to New England or will he go elsewhere? Here's what our staff is predicting.

We know that Jones wants to be in California and it doesn’t look like the LA Galaxy are an option. With this mind, it makes sense for the midfielder to land in San Jose. Although they did beat Seongnam FC, Sacramento Republic FC and the New York Cosmos, the Earthquakes lost all three of their preseason games against MLS competition. Part of the team’s issue is their lack of bite in the midfield, something that Jones certainly brings. The 34-year-old US international would also serve as a good mentor for the young, but talented, crew of Fatai Alashe, Anibal Godoy, and Marc Pelosi.

The Rapids appear intent on winning now, having traded the 2nd, 12th and 22nd picks in the 2016 SuperDraft in exchange for Zach Pfeffer, the top allocation ranking (used to sign Tim Howard, who will arrive in July) and a handful of draft picks. Acquiring Jermaine Jones would help fortify this win-now mentality. How? First, the Rapids have just one Designated Player on its roster, which leaves room for the club to fill its remaining slots with Howard and Jones. Second, the team employs four midfielders under the age of 25; Jones natural leadership would serve these players well. Third, Jones reportedly has a strong relationship with Howard, and the two could combine to help expand the Rapids dwindling fan base. And finally, Jones would move much closer to his home (and family) in Los Angeles. The rapids need talent, and Jones just could fit the bill.

Where are we at with the Jones Saga? 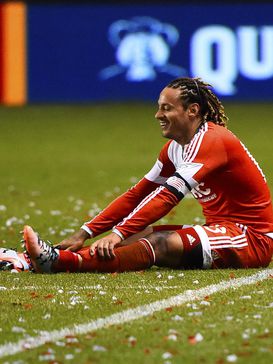 Let's break it down.

Re-signing with the Revolution is still the only logical landing point for Jones right now. No one in MLS wants to give up any major assets to acquire his rights and Jones' value is still highest with the Revs for 2016. I detailed all of this last week, so go check out that post.

There is one scenario that could solve all problems, though I'm not sure how possible it would be. Jones could re-sign with MLS, more specifically with one of the expansion teams. Los Angeles FC is two years away from their first MLS game but perhaps they wouldn't mind making a bit of a splash for their first-ever signing. Next year Minnesota and Atlanta join the league and they will be looking for additions, though Minnesota might have a decent compliment of players from their NASL roster. But essentially, Jones re-signs with MLS, and his contract is allocated to one of the expansion sides. In exchange for his rights, the Revs keep Jones on loan for 2016 (possibly 2017 for LAFC) and the league, Revs and expansion side work out a way to pay Jones a salary he can agree with.

Will that above scenario work? It's MLS, they can make it work I assume. But the clock is ticking for Jermaine Jones to sign a contract and start his six-game suspension, and the 2016 First Kick is only days away.