We think the Revs made out like bandits during Thursday's SuperDraft. Well, most of us.

Just before the 2016 MLS SuperDraft kicked off, rumors swirled that Jay Heaps and Mike Burns had plans to move up the board to snag left back Brandon Vincent. Well, the Revs stayed put—and drafted versatile defender Jordan McCrary and scrappy forward Michael Gamble instead.

How did the club make out? Our staff weighs in.

While neither move will turn the Revs into an MLS Cup contender, the Revolution confronted a pair of high-level needs—and gave up nothing in the process. Jordan McCrary appears as MLS-ready as any defender in the draft not named Joshua Yaro or Brandon Vincent, and will use his speed, versatility and crossing ability to immediately compete for a spot in the Starting XI.

Michael Gamble, ranked 12th on Top Drawer Soccer's  "Big Board 2.0", could provide great value in the second round. Injury history aside, his ceiling looks high (Ives Galarcep likens him to Ethan Finlay). He's a scrappy attacker who can flex out wide if needed, giving Heaps even more versatility up top. We knew the Revs weren't going to find Jermaine Jones' replacement in the draft—but they found just about everything else. 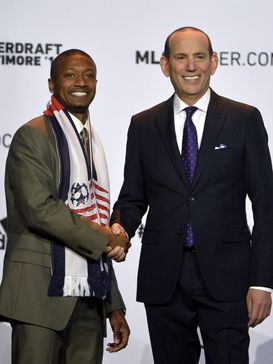 Everything you need to know about Jordan McCray, Michael Gamble and the Revs draft.

Mike Burns remarked following the draft that the day is a valuable tool for MLS teams, and this year's edition was no different. The Revs acquired two players in Jordan McCrary and Michael Gamble who can contribute come day one, albeit to different degrees.

There's nothing flashy or earth-shattering about these two selections, but instead purpose and efficiency. That's about all you can ask for in Major League Soccer, a place in which the draft's value is diminishing as Homegrown Players blossom.

With only six defenders on the roster, grabbing a versatile fullback like Jordan McCrary was a huge get for the Revolution. The 22-year-old is full of potential and will challenge Darrius Barnes and London Woodberry for the right back spot from day one. Although you always have to worry about a player who suffered a major injury in the past (McCrary had ACL surgery in 2014), the UNC product seems to be ready to make the jump to MLS.

The future of the Revolution's second pick is a bit more uncertain. The undersized winger appears to have the pace and smarts to play in the Revolution's system. That said, it's difficult to see him getting time in an overcrowded midfield. At this point, it's equally likely that Gamble turns out to be a one-year player as it is for him to be a long-term stud.

I really like the pick up of fullback Jordan McCrary, I wanted him in the SB Nation MLS Mock Draft but he went a few spots higher. It's a great selection for the Revolution who lost the equally-versatile Kevin Alston to Orlando City SC in the Re-Entry Draft. McCrary is probably going to be a more defensive option than Alston, which should be fine in the short term as he will likely compete for minutes with utility defender Darrius Barnes and youngster London Woodberry for minutes at right back. The Revs were never getting a replacement for Jermaine Jones in the draft, but they did get to replace Kevin Alston, who was the 10th overall pick back in 2009.

I also don't have a problem with Michael Gamble at #30. At face value it's solid value pick for a player that was rated as a possible late round pick and someone Taylor Twellman said really impressed the team at the combine. Gamble might not have a true position with the Revs, but I could see him a Steve Neumann type rookie season with a lot of substitution appearances. More likely Gamble could rack up a lot of starts at Rochester in the USL, and the Rhinos could use some reinforcements right now.