Andrew Farrell is a legit center back, and two other thoughts from Saturday's Revs-TFC match.

It wasn't the way they wanted to do it, but the New England Revolution are now unbeaten in nine after drawing Toronto FC 1-1 on Saturday. Juan Agudelo gave home side the lead heading into halftime with Michael Bradley later equalizing through a great individual effort. So what can we takeaway from this bittersweet result? Here are a few thoughts: 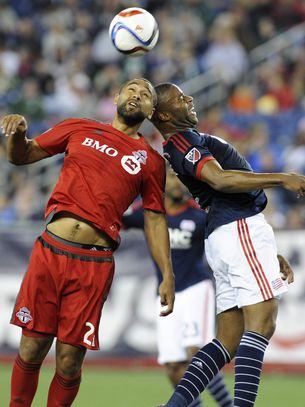 It wasn't a shutout but the Revs back line did put in a solid shift against TFC.

1. The Revolution have a new look. With London Woodberry and Chris Tierney manning the flanks, the Revs have become quite dangerous from the peripheries. In fact, the team has now scored five goals from crosses with one coming from Tierney and two coming from Woodberry. It's a different approach for the Revolution as they only scored five via crosses in the whole of 2015. The new tactic should open things up in the middle, leading to more opportunities for Lee Nguyen, Jermaine Jones, and whoever else is playing as a central midfielder.

2. Andrew Farrell is a legit center back. Remember when people were concerned about Farrell's transition to the center? That's not the case anymore as the Louisville product has been lights out after two less-than-stellar outings to start the season. More than a player who relies on his natural abilities, Farrell has developed solid positioning which he uses to put out many fires. Perhaps the most impressive aspect of Farrell's steady improvement is that he's shutting down world-class players. On Saturday, Farrell stood toe-to-toe with Giovinco, a 28-year-old Italian national team player who was recently with Juventus. When asked if Farrell has improved since the beginning of the season, Jose Goncalves simply said, "Definitely."

3. The Revs have to get full points in situations akin to Saturday. One week after allowing Orlando City SC grab a late equalizer, the Revs once again saw a lead slip away. This week was less egregious, however, as Toronto had several superb looks throughout the game. The team ended with nine total shots, hitting the post a couple of times. Still, the Revs have to do better job of holding onto the lead since it will be a determining factor in the final standings. The Revs are now looking up at DC United, who have sole ownership of first place.