Can the Revolution extend their unbeaten run to nine or will Toronto FC begin a streak of their own?

Share All sharing options for: How to Watch Revolution vs Toronto FC: TV Schedule, Online Streaming

The New England Revolution are looking to extend their unbeaten run to nine straight when they welcome Toronto FC to Gillette Stadium on Saturday night. 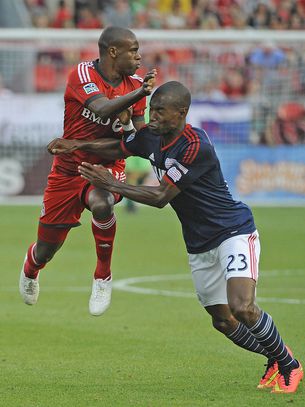 Who's in? Who's out? Take a peak at the latest reports.

The Revs are coming off a disappointing road draw against Orlando City SC. It was an odd game in which the Revolution were dominant for long stretches before letting their guard down and allowing two late goals.

It's not all doom and gloom for the Revolution as Charlie Davies has found his form, scoring in the last four matches. The Revs will also benefit from an extended stay at home as the team plays four of their six May games at Gillette Stadium. Heading into Saturday, the Revs are unbeaten at home through 13 games.

Toronto FC will hope that snap that streak and start one of their own. TFC is coming off a midweek win against the Montreal Impact, though they were actually ousted from the Voyager's Cup on away goals. Putting a heavy emphasis on the Canadian Championship, head coach Greg Vanney opted to play a large number of starters. Will this affect Saturday's league game?

Join us as we discuss this, and much more!