The outspoken LA Galaxy head coach as well as Sebastian Lletget's agent are unhappy about the new Discovery Signing mechanism that forced the Galaxy to send the Revolution $50,000 in allocation money.

Share All sharing options for: Bruce Arena Can't Be One To Cry Wolf About MLS Roster Rules

I'm going to let everyone in on a secret.

I love Bruce Arena. Not as the opposing coach who racks up MLS Cup titles with the Los Angeles Galaxy and defeated my Revs in the MLS Cup Final a few months ago. Arena's one of the best American soccer coaches ever and I respect him for that, but I love him because he's pretty much a walking, talking story generator that gives everyone lots of things to talk about and is a writer's dream

And he's unhappy about having to ship some allocation money over to the New England Revolution for the "discovery" rights to Sebastian Lletget, a United States youth international who came up at West Ham United and starred with their U21 side in England, but only made one full professional appearance in the FA Cup in 2014. Buried in the press release from the Galaxy is a snippet about the Discovery Process' conflict resolution mechanism that has drawn the ire of the Galaxy head coach.

Arena dislikes the new mechanism that forces teams who want to sign a player on someone else's list to pay that other team $50,000 in allocation money for the privilege. The Galaxy coach blames the Revolution for "sitting" on Lletget purely to get allocation funds, and we'll discuss that in a little bit. Lletget's agent, Chris Megaloudis took to Twitter to outline the problems surrounding his client's signing in LA.

I will be the first to admit that there are very few things about MLS and player signings that make a lot of sense. New England will probably be remembered as the only team that will ever win a blind draw in the history of the league after acquiring Jermaine Jones last summer. But the discovery process was specifically changed to settle disputes on discovery claims in the new CBA. From the MLS Press Box Rules and Regulations: 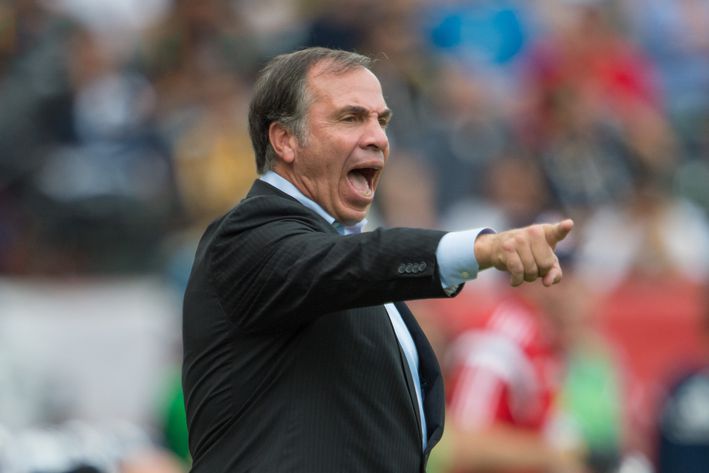 So instead of offering Lletget a contract, the Revolution took the allocation money and Lletget signed with the Galaxy. Quite frankly, that should have been the end of this story were it not for Arena and Megaloudis airing some dirty laundry about the process. But if Megaloudis is going to air the laundry, he has to air all of it. I'd love to know when the Revolution put in their discovery claim and when the first available date to put claims in per the new CBA was. If the first date was March 1st and only the Revs and Galaxy put claims in on the same day, the Revs finished lower in the standings in 2014 and would have priority per the rules linked above. This is a very one-sided explanation from Megaloudis and while The Bent Musket reached out to the Revs for comment, the team declined to answer questions about a player who signed with another team.

Despite this, Megaloudis in particular makes some good points. The issue of whether or not teams are actively scouting and/or interacting with the players on the list is a one of them. It seems silly for a team to have Cristiano Ronaldo on their discovery list, for example, and at the very least not tell him. Whether or not that means a team is "actively" pursuing Ronaldo is not the point; the Discovery list is there to reward teams for scouting players in general that can be signed under the numerous MLS rules and salary cap.

I disagree with the idea that there are deterrents and punishments for not scouting those players because the discovery list is there, like it or not, to keep big clubs from signing whoever they want. You can't have hundreds of thousands of dollars in allocation funds tied up in discovery claims when that money is more likely to be used in internal trades and other transactions. Smaller teams need allocation funds under the current setup to make necessary deals throughout the year. So if a team wants to waste a discovery spot on guys like Ronaldo, that's fine. It's one less spot they have for a player who could actually sign with the league.

Yes, it's very likely the Revolution were probably not going to sign Lletget, a young talented attacking midfielder to a roster already loaded with attacking midfielders, most of them young. But isn't it wise for smaller-market teams to stock their discovery lists with players around the world who could realistically make the jump to MLS? Young American players like Lletget and Will Packwood (currently on trial with the Revs) are excellent choices because there's a good chance that they can sign with the league. There's no international roster spot to worry about and a reasonable price to iron out within the league's salary cap.

There's a pretty clear comparison in other American sports, as well. What the Revolution did in putting Lletget on their discovery list is similar to putting in a waiver claim in Major League Baseball after the trade deadline, where players have to clear waivers in August to be trade eligible. If another MLB team claims a player, he can either be traded, pulled off the waiver list or, rarely, the waiver claim can be accepted. It's a great comparison to me because MLB teams put in claims specifically to block players from either becoming trade eligible by clearing waivers outright or preventing a team with a better record from having first crack at a player.

Unlike in baseball where teams can just pull their players off waivers, in MLS the discovery list gives you a definitive out if you pony up $50K in allocation. Teams lower on the standings still get something for their discovery claim, regardless of the legitimacy, and team higher up on the table still gets their player. This should surprise no one in MLS after years of Allocation Lists, Weighted Lotteries, Waiver Drafts, and other mechanisms designed to promote parity and help the teams that were bad the year before.

So with apologies to Sebastian Lletget if there was the possibility of West Ham releasing you from your contract early to sign with the Galaxy in preseason, but this is not New England's fault. The discovery signing rule was just retooled during the last CBA negotiations to put in that $50,000 release clause that at least forces teams to offer a contract to a player or give up his rights for the allocation money. Before this year, the Revs could have continued to sit on Lletget or worked out some type of trade with the Galaxy for his rights. At least now, it's a flat rate, $50K, take it or make your own offer. It's not perfect, but at least I think it's for the better. Bigger teams can still sign discovery players, they just might have to compensate another team first.

While Bruce can moan and groan about the new rule, it's something his owners came up with barely two months ago to specifically prevent teams from sitting on discovery signings. From the Revolution's standpoint, even if it was an intentional claim to block the Galaxy, that's just good business and LA should take it up with the league. And if the Revs have to send $50,000 in allocation to another team for the discovery rights to Will Packwood, than I'd say the same thing to which ever team claimed Packwood and the Revs will send the money received from Lletget right to that other team. It's good business for tight budget teams to claim viable players that could be signed from the league and if the owners and teams weren't aware of this when they negotiated the CBA that's their own fault.

But the biggest problem with this, is that it's coming from Bruce Arena himself. Lest we forget, the real reason why we have a lot of these crazy, Designated Player, Allocation List, Discovery Signing player acquisition mechanics:

That's right Bruce, your team brought this upon themselves. I'm aware you were the coach of the New York Red Bulls at the time. But your new club was the first to have a Designated Player, bringing in a new and even more confusing era of player rules designed to let clubs with bigger bankrolls spend more. Your club spends well over $10M in total salaries, yet you complain about $50,000 in allocation for a discovery signing in a league designed, for better or worse, to promote equality and fairness throughout the league.

You can't have it both ways Bruce. You get to spend entire teams' budgets and salary caps on two or three DPs every year in a league built on parity and making it difficult for one team to dominate the league. Which by the way, you're dominating anyway: three titles in four years. You're adding a very talented young player in Lletget and have already added England legend Steven Gerrard for later in the summer. But you're going to cry and complain over $50,000.

Both Arena and Megaloudis bring up legitimate points, but unfortunately it comes off more as whining here than anything else. Arena should be complaining to his owner for signing a new CBA with a rule he doesn't like and working with the league to change the process that makes teams take a more active role with the players on their discovery list.

But as for the Lletget saga, Bruce is the big bad wolf upset that the pigs have tried to blow down the 20-foot iron gate to his mansion.

And somehow I find that just a tad bit ironic.