Trevor Spangenberg is heading back on loan to the Richmond Kickers.

Share All sharing options for: Revolution Goalkeeper Loaned to Richmond

It looks like the Richmond Kickers liked what they saw out of New England Revolution goalkeeper Trevor Spangenberg. 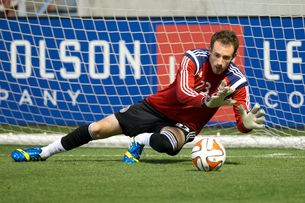 Spangenberg will be reuniting with the Kickers of USL this weekend as part of a one-game loan. Last weekend Spangenberg helped the Kickers to a 1-0 victory over FC Montreal, keeping their unbeaten record intact. The Kickers are now 4-0-2, putting them even with Revs' affiliate the Rochester Rhinos for first place in the USL's Eastern Conference.

Spangenberg signed with the Revs in early March after completing a successful preseason trial. Serving as the third-choice goalkeeper behind Bobby Shuttleworth and Brad Knighton, Spangenberg has yet to don Revolution colors for a professional game. He does, however, have one MLS appearance after coming on as a substitute for Chivas USA in 2014.

Spangenberg is expected to return to New England shortly after the Kickers play the Charleston Battery on Saturday night at City Stadium in Richmond, Virginia. The game will be broadcasted for free via YouTube.com.