Farrell Rebounds after his "Two Worst Games Ever"

The New England Revolution have now gone 546 minutes without conceding a goal from the run of play, a stat greatly influenced by Andrew Farrell's development at center back.

Share All sharing options for: Farrell Rebounds after his "Two Worst Games Ever"

Looking back at his first two games as a full-time MLS center back, Andrew Farrell was pretty blunt. The New England Revolution back line, marshaled by Farrell and Jose Goncalves, looked in disarray at times and conceded a total of five goals to the Seattle Sounders and New York City FC. Farrell and the Revolution defense has since rebounded though the former Louisville player still harbors those memories. 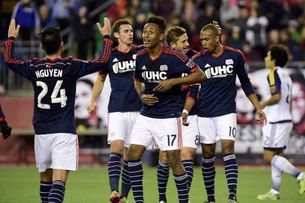 The Revolution managed a big 4-0 win on Saturday, and here's how it happened.

While the attackers stole the headlines after Saturday’s game against Real Salt Lake, it’s worth noting that Revs haven’t concede a goal from the run of play since their second game of the season. This streak of 546 minutes can largely be attributed to Farrell’s development.

While other players have shuffled in and out of the starting lineup, Farrell has been a constant, serving as the only outfield player that has played every minute of 2015. With each game, Farrell has looked more and more comfortable.

"I think the first two games were really rough," Farrell stated. "(They were) rude awakenings to the league and playing that position. But I think each day and each game I’m growing with confidence."

A large part of Farrell’s progress has to do with the Revolution coaching staff. Jay Heaps and his assistants have been patient with Farrell, understanding that he will become an established center back with time.

"I think confidence comes from the front, from the coaches," Farrell explained. "Those were probably my two worst games ever and they stuck with me. Now I’m trying to repay them by working and learning each and every day."

With injuries being a regular concern for the Revolution, Farrell has partnered with Goncalves, Darrius Barnes and Jermaine Jones. While some of these arrangements were provisional, Farrell remained focus on getting better with every game.

On Saturday, Farrell played alongside Jones, who has been clear that he sees himself as midfielder for the Revs. Despite this, and the fact that the team earned a shutout, Farrell has pinpointed areas of weakness that he hopes to improve.

"I think we just got to be clean," Farrell confessed. "The chances that RSL got today were because of a few misplayed balls or mistakes we played out of the back. So, just tighten it up, talking more."

With Farrell now in a defensive groove, he still has another achievement to check off his list: scoring a MLS goal. Last season, Farrell had a bet with his brother where he wasn’t allowed to shave his beard until he scored. The season came and went without success and although the bet has since expired, Farrell is still hungry. He knows, however, that the patient approach—much like the one he took to adjust at center back—is the right approach.

"We keep getting shutouts on, so that’s fine with me," Farrell said. "We keep on winning but hopefully I score one of these days."