You know who was excited about Scott Caldwell's goal? His teammates.

Scott Caldwell, nicknamed "the glue" by teammate Andrew Farrell, does all the little things behind the scenes, such as closing down passing lanes and keeping the ball moving with smart, quick passes. As a defensive midfielder, the contributions of Caldwell often go unnoticed. So what happens when the Massachusetts native scores his first career MLS goal? The team goes crazy.

Watch the Goal Everybody's Talking About 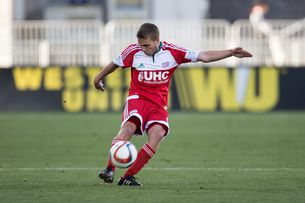 Local boy Scott Caldwell scored a goal, so you should probably watch it.

With the score already 3-0 in the latter stages of Saturday’s game between the New England Revolution and Real Salt Lake, the rout was clearly on. The Revs continued to pressure the net with several players having opportunities to score.

Caldwell received his chance in the 84th minute after Steve Neumann and Juan Agudelo failed to penetrate the net. With the ball rolling towards the top of 18, the Massachusetts native took a left-footed shot and beat Jeff Attinella.

Then his teammates came looking for him.

One of the first players to arrive at the scene was Farrell, who, like Caldwell, joined the New England Revolution in 2013. The two competitors have developed a positive relationship both on and off the field, which made Caldwell’s strike special to Farrell.

"I've told him before every game that if he scores then I’m literally going to kill him," Farrell said. "So, I wanted to be the first one there to celebrate."

Heeding Farrell’s warning, Caldwell sprinted away from the RSL goal and braced himself to be tackled. What came wasn’t painful, however, as Farrell and the rest of the Revolution squad simply wanted to congratulate Caldwell on the momentous occasion.

"I noticed that the first guy that got to me was our center back Andrew Farrell so that was interesting," Caldwell recalled. "I was bracing myself for a tackle but luckily he just picked me up a little bit."

Though not on the field, head coach Jay Heaps was also excited to see Caldwell score. After joking that the two New England natives share a unique bond having both donned the number 6, Heaps expressed pure elation for the success of his defensive midfielder.

"He puts in such a great effort every training session, every day and every game," Heaps said. "He’s just one of those people you want to just have on the field and do well and when he does and scores a goal like that, that was special because it was his first goal, so we were all excited."

Caldwell, who actually called a goal for him or Andy Dorman at halftime, knows that he isn’t the type of player that’s going to score every week. Working in tandem with the other midfielders, he has to know when to join the attack and when to stay back. This type of team-first mentality makes him a huge asset to the Revolution.

"Scott is such an underrated player," Chris Tierney praised. "He brings it every day, he’s phenomenal in training, he’s even better in games. We’re really lucky to have him and it’s great to see him get on the scoresheet, long overdue, so we’re excited for him."