Revolution 2-1 Union: Player Ratings and Man of the Match

We break down the Revs' victory from top to bottom, starting with Bobby Shuttleworth and ending with Diego Fagundez. Who deserves Man of the Match honors? Vote below.

Share All sharing options for: Revolution 2-1 Union: Player Ratings and Man of the Match

Despite falling behind on a first-half free kick from Cristian Maidana, the Revolution turned in a complete second-half performance en route to a 2-1 victory. This time around, we served up multiple 9s. Have we lost our minds? Or did the Revolution turn in several outstanding individual performances?

Share your thoughts--and vote for your Man of the Match--below.

Nick - 6: Even after cheating near-post on Maidona's free kick, Bobby never had a chance to make a save. Stepped into a handful of awkward positions--and survived several nervy moments--but in typical Bobby fashion, made key saves when they mattered most. Jake - 6: There were some nervy moments--and I still think Aristeguieta is offside on that crossbar chance in the first half--but the free kick was just about unstoppable and Shuttleworth didn't have a ton to do regarding shots until his impressive save on Edu late in the second half.

Nick - 6: Pushed high and joined the attack early on, but once again highlighted the need for Chris Tierney's service. Connected on nearly 95% of his passes, though, and made a handful of decisive defensive challenges. Jake - 6: Overshadowed by Woodberry on the other side of the field, but was mostly shut down offensively as the right-footed left back struggled to help the attack down the flank. Still a solid defensive shift overall, though.

Nick - 8: Overcame early discord with Jermaine Jones to turn in a strong match. Benefited from tidy passing, patience over the ball and strong, physical defending. Jake - 8: Really settling into the center back position, which is all the more impressive considering the rotating cast he's had to play with. Tons of interceptions and clearances to go along with a very tidy passing percentage; this time, the Revs didn't just "hoof" the ball forward aimlessly. Instead, they picked out good long balls to teammates in space.

Nick - 9: At times, Jones looked like a goalkeeper along the back line. Threw himself in front of crosses and dominated the aerial game, winning 6 key challenges with his head. Slotted into the center back spot without hesitation. Stellar match. Jake - 8: I think the brightest part of Jones' day, beside his interceptions, clearances and passing numbers, was his aerial play, something the Revs sorely needed with Goncalves out of the lineup (even if the they struggled as a unit on set pieces).

Nick - 9: Couldn't have asked for more. Pushed down the right flank with purpose, spun in a handful of dangerous crosses, stood strong in the air (3 aerial wins), cleared an equalizer off the line and shut down the Union attack with clean 1v1 defending--especially during several deep runs down the right channel. Won't be the last we see of London in 2015. Jake - 9: Man of the match were it not for Bunbury's heroics in the second half, and still could've been regardless. Arguably the best Revs player in the first half and then made two key defensive plays in the second, boxing out Conor Casey inside the penalty area and clearing the ball off the line. Should at least start next week against Real Salt Lake based on form alone. 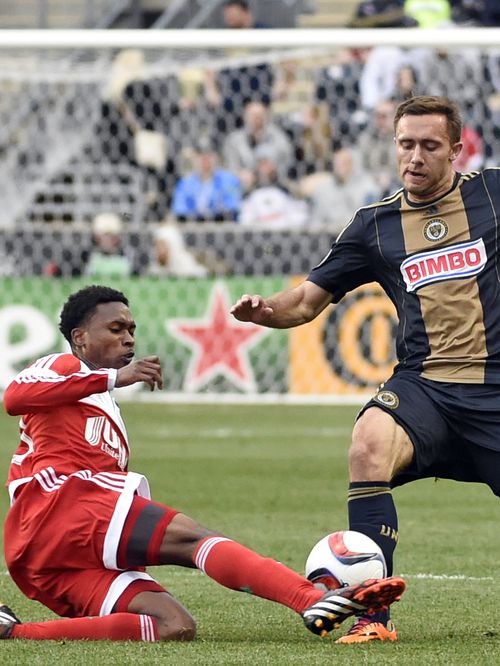 Three quick hits from the Sunday's come-from-behind victory over the Union.

Nick - 7.5: Played 90 purposeful minutes en route to his best performance of the season. Patrolled the middle with physicality and even flashed his attacking abilities in the second frame. Critical component of the win. Jake - 6: It's a mixed bag for me here. On one side, Dorman didn't do much wrong, got involved in the Revs' high pressure style and deserves a lot of credit for getting into the final third repeatedly on his trademark runs. But he was just dreadful when he did join the attack, minus his understandable Wondo-esque shot off the half-volley.

Nick - 6.5: Quiet, unspectacular match out of the middle. Benefited from strong distribution (90.7% passing) and helped stall the Union counter throughout the second half. Jake - 6: With the Revs focusing on getting the ball out wide, Caldwell got overshadowed a bit in the middle, but that's perfectly fine. He's a great complimentary piece to this lineup, so days when he doesn't seem everywhere means that his teammates have stepped up big time.

Nick - 5: Disappeared for prolonged stretches in the first frame and struggled to make key contributions. Once again, Rowe came out firing in the second half, but failed to find his true form. Jake - 5.5: He was able to find space as Woodberry became a threat during the first half, but just wasn't able to generate much with it. He's very serviceable out wide but will never have the same impact as Bunbury on the flank.

Nick - 6: Same story, different day. Strong and creative over the ball, but was dispossessed entirely too often. When he finally decided to pull the trigger from distance, his shots missed the mark. Bonus points for bailing out Shuttleworth with a goal-line clearance. Jake - 6.5: He's still pressing a little bit, but he's not afraid to have a go from distance and is creating more chances for his teammates. With the Revs finding success out wide with Woodberry, he will likely find more space with Rowe to operate moving forward.

Nick - 5.5: His aggressive performance on the wing--particularly in the air--brought life to the attack, though he failed to consistently impact the match. Made way for Diego Fagundez as part of a difference-making substitution. Jake - 6: A constant target out wide for the long balls and at times gave Philly fits on both ends of the field in a good (if unspectacular) shift coming off international duty.

Nick - 7.5: By far the most active starter moving forward. Hit 4 shots (2 on frame) and scored a crucial equalizer following a crafty run into the middle of the box. Held up with strength from start to finish. Jake - 7: Hold up play was spectacular, finish was as simple as can be and with the Revs doing so well with possession he didn't need to track back that much defensively, a fine shift overall.

Nick - 6.5: In the second frame, the attack ran down the right channel, though Tierney's assertive defending helped close down the match in the waning moments. Would love to see CT8 opposite London Woodberry against RSL. Jake - 6: It's rare that Tierney's service on the left flank is overshadowed, but with Woodberry and Bunbury pumping crosses into the box all game Tierney was just an extra late game threat as he replaced Alston late in the second half. His impact is better suited in a starting role.

Nick - 9: Clever footwork--and a perfectly-weighted cross--resulted in a well-built equalizer. Moments later, he turned around and finished a 40-yard run at goal. Wanted the match more than the Union back four and it showed. Jake - 9: I mean, a goal and an assist in any game is a good day, but in thirty minutes off the bench is pretty much spectacular. If he's back to full fitness, he is probably another person who should be starting. But in a long season, also not a bad guy to bring off the bench when you're down one in the second half.

Nick - 8: Crucial second-half sub allowed Fagundez to leave his mark on the match. Played a flawless ball into the middle, setting up Bunbury for the eventual game-winner. Strong play over the ball helped the Revs dominate possession down the stretch. Jake - 8: Yes the assist, and the aerial duel to start that counter attack, were very impressive. But my favorite play of the night was when he boxed out Gaddis in stoppage time to drew a foul as he tracked back on defense. Diego found the bench last season because of his lack of defensive effort and a complete performance here could make him a complete weapon going forward, either as a starter or off the bench.