Davies Talks about Partnering with Agudelo

Share All sharing options for: Davies Talks about Partnering with Agudelo

Partially influenced by the arrival of Juan Agudelo as well as an unfortunately-timed calf injury, Charlie Davies has found himself starting on the bench for the first three games of the season. The New England Revolution striker understands the cautious approach, but he’s also eager to contribute more minutes. 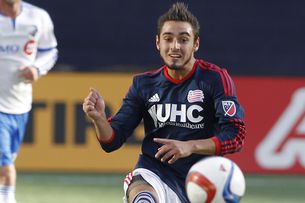 "It’s about playing the right amount of minutes," Davies enlightened. "Managing the minutes early in the season until everyone is fit. So at this point, I’m excited. I’m ready to get going. I feel like I’m a bulldog chained up and I’m ready to go."

Davies remained on the bench for the season opener against the Seattle Sounders, stating he would only be used if the game was close. In the following two fixtures, Davies saw his time increase leading to a 28-minute appearance on Saturday.

Davies was subbed on soon after the Montreal Impact lost a man due to a red card. The moment marked the first time that Davies and Agudelo shared the field. While Agudelo would depart in the 84th minute, Davies predicts that Saturday won’t be the last time that the two forwards work together.

"Juan is a striker who I think likes to play with another striker," Davies said. "He likes to drift out into wide areas. For me, it’s an easy connection because he comes out wide and comes in and we can connect. Also, it gives Lee more space in the middle."

Head coach Jay Heaps also expressed optimism in regards to what he saw when Davies and Agudelo were both on the field. The gaffer explained that the two strikers have been practicing together, which showed on Saturday.

"Charlie’s got some wheels and he can really open up back fours," Heaps said. "I think a couple of under hit balls, and if we’d over hit those he would have been in and that also allows us to now play Juan."

A versatile player, Davies would be willing to play any of the three attacking positions. In fact, the New Hampshire native experimented on the wing when he first arrived. That having been said, Davies believes he demonstrated that center forward is his best position during last year’s playoffs when he scored a team-high four goals.

While 2015 hasn’t kicked off the way he thought it would, Davies is confidently looking forward, waiting for the next chance to prove himself.

"I’m willing to continue to keep growing as a player," Davies said. "I want to get better, I want to do more, and I feel like this is the season where I can take that next step forward and be the guy. Now it’s just being positive, patient, and hungry."