Former New England Revolution defender A.J. Soares will miss the next 6-8 weeks with a knee injury.

A.J. Soares' move to Europe hasn't exactly started in a positive way as the former New England Revolution defender will miss the next 6-8 weeks with a knee injury.

Player Ratings for Revs vs. Sounders 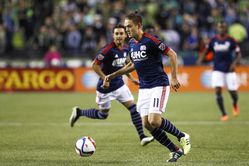 How did the Revs do in their first game without A.J. Soares? The guys at TBM dole out ratings.

Soares, who decided to explore European options when his contract expired soon after MLS Cup, suffered an injury on Sunday while practicing with his new club Viking FK of Norway. The California native reportedly twisted his knee when he collided with another player.

The injury is disappointing as Viking is low on defenders and was expecting big things from Soares. Upon his signing on Feb. 23, head coach Kjell Jonevret lauded Soares as a natural leader who should instantly contribute to the team. Soares was also optimistic about joining a Norwegian side, saying that MLS is a physical league, similar to the Tippeligaen.

With the 2015 Tippeligaen set to begin on Apr. 6, Viking will have time to find a player to fill-in for Soares. Their next preseason game is on Satuday when they face Sandnes Ulf.