The Untied States is in the middle of a nine game international winning streak. The team standing in their way of another Gold Cup final - Honduras, who is also the last CONCACAF team to beat the USA.

The United States Men's National Team has breezed into the semifinals, winning three of their four Gold Cup matches in blowout fashion, dispatching Belize, Cuba and El Salvador by a combined 15-3. The USA is in the midst of a 9-game international winning streak in all competitions.

A crooked number on the scoreboard today at Cowboys Stadium in Dallas is going to be a much tougher task, as the USA faces the team with the stingiest defense in the Gold Cup, Honduras. In fact, the USA's last loss to a CONCACAF team was at Honduras 1-0, on February 6, though the Americans won the reverse fixture in Rio Tinto on June 18, also 1-0. 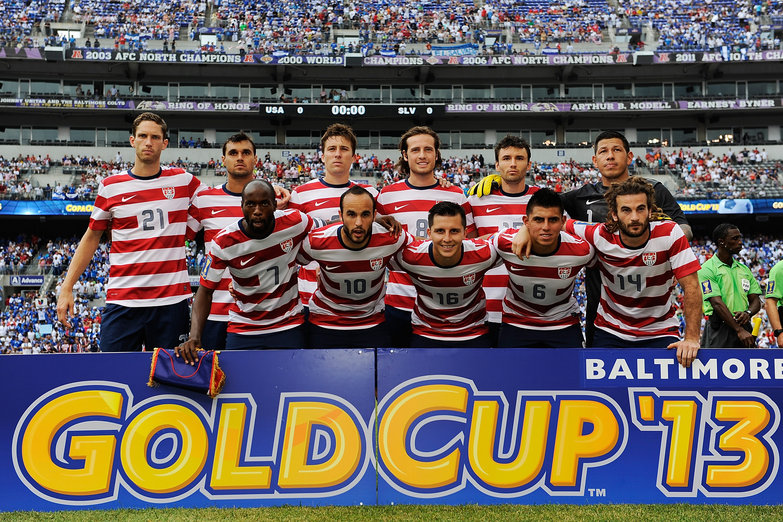 Jake jumped out to a commanding lead in the predictions game after the second set of quarterfinals recently, but that could all change with the semifinals.

While the USA has looked impressive against relatively weaker countries, their lone shutout in the Gold Cup actually came against the best team in their group, Costa Rica. It took the US over eighty minutes to break down the Costa Rican defense, playing in a 5-4-1 formation, with Landon Donovan finding Brek Shea wide open on a counter attack. That 1-0 win propelled the US to the top of Group C and an easier path through El Salvador into the semifinals.

Not to say that the US' defense hasn't been solid, it generally has done well. But even against weaker competition, the US has been vulnerable to mistakes and individual playmakers. The US gave up goals on an unmarked header against Belize, losing out to a 1v1 vs. Cuba deep in the defensive third and of course, El Salvador's Rodolfo Zelaya's slick run that ended up drawing a penalty.

While Honduras has played well, they generally have not been overpowering offensively. Much like the USA, they're more likely to score team goals, breaking an opponent down, capitalizing on a counter, etc. For the US backline, which will likely feature first team center backs Matt Belser and Omar Gonzalez who were called up for the knockout rounds, this is both a blessing and a curse. While there isn't a Zelaya to focus on (no disrespect to Andy Najar, whom MLS fans know well), any moment of tactical weakness or mistake can be an opportunity to give up a goal. Basically, all three goals the USA has given up.

On offense, I expect much of the same from the USA. Landon Donovan's already assured himself a spot back on the senior team with his resurgence, though where he'll play is another question. Players like Joe Corona, Chris Wondolowski and others are also making their cases for roster spots. Nick Rimando proved on Sunday why he's generally been considered the third keeper behind Howard and Guzan. All the Americans have to prove is to win the Gold Cup, but that won't be easy against a solid Honduras squad.

Don't pay much attention to Honduras' loss in the group stage to Trinidad and Tobago. Honduras rested all of their starters and had a red card in the first half having already clinched the top spot in Group B. If we don't count Honduras' first goal against Haiti in the fourth minute, which was aided by a non-call by the referee, Honduras scored against Haiti in the 78th, El Salvador in the 92nd and Costa Rica in the 49th. Not exactly the fastest starters out of the game, which should give the USA ample time to take a lead and force the game to open up.

Also of note, is the field conditions at Cowboys Stadium, which according to many are horrible. The grass field that was placed over the turf has apparently not been done well, as pictures of large amounts of green sand are floating around the internet, which will apparently be used as filler for the poorly laid turf.

Kickoff is scheduled for 7pm EST on FOX Soccer followed by Panama and Mexico thirty minutes after.