El Salvador, Trinidad and Tobago Advance in Wild Finish to Group B

Knowing that three points would clinch a spot in the Gold Cup quarterfinals, both El Salvador and Trinidad and Tobago took advantage of opportunities and forced their way into the knockout stages.

Share All sharing options for: El Salvador, Trinidad and Tobago Advance in Wild Finish to Group B

For the first seventy-five minutes, El Salvador's Rodolfo Zelaya wondered what he had to do to score a goal against Haiti.

Twice in the first half he found the post from distance catching Haiti's keeper Frandy Montrevil off his line. Then Montrevil saved Zelaya's controversial second half penalty. But the rebound came right back to Zelaya.

He would not miss a fourth time.

The penalty was awarded to El Salvador after Jean-Marc Alexandre tugged down Victor Turcios in the box, although replays show both players grappling for position in the box. Despite the protests from Haiti, Jean-Eudes Maurice and Montrevil were shown yellow cards, the penalty stood and Zelaya, who has scored all three goals for El Salvador in the group stage, would advance into the quarters on four points regardless on the final match. Their four points assured them one of two third place spots ahead of Martinique (3 points in Group A) and Belize or Cuba (winner of their match could have 3 points). 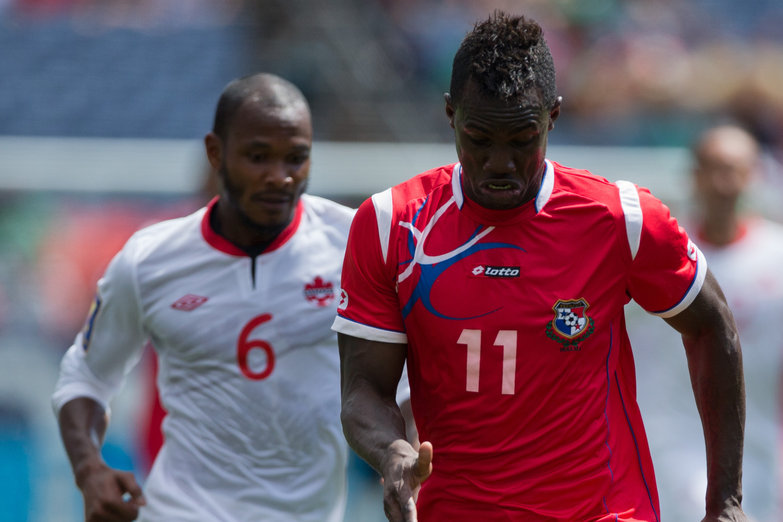 Canada's disappointing Gold Cup run came to an end as Mexico and Panama booked their places in the quarterfinals.

Haiti was lucky to finish the match with all eleven men on the field, center referee Javier Santos didn't issue many yellow cards in a match, especially one that featured a total of 37 fouls, 22 by Haiti. Not counting the two cards for dissent on the penalty, only three other cards were issued.

Haiti would have to anxiously wait for the results of the second game, as Honduras played Trinidad and Tobago.

For Honduras, they clinched Group B's top spot with Haiti's loss and seemed content to take long shots in the early stages of the match. Trinidad and Tobago would need to catch a break to gain an advantage and that opportunity came late in the first half.

Honduran defender Jose Velasquez was shown a straight red card in the 38th minute with a terrible scissor challenge through the back of the left led of T&T's Cornell Glen. Down to 10 men, Honduras subbed out striker Mario Martinez in favor of defender Osman Chavez.

But right after the halftime restart, Honduras' Orlin Peralta would push down Cornell Glen inside the box in the 46th minute and Kenwyne Jones would slot home the ensuing penalty to give T&T a 1-0 lead. Kevin Molino would double the lead in the 67th minute, latching onto a through ball at the top of the box and firing into the back corner past Kevin Hernandez (3 saves).

With their improbable 2-0 win complete, Trinidad would secure second place in Group B with four points, having scored more goals than El Salvador in the tournament. Haiti, who had a tremendous tournament, sadly would be sent home, finishing in last on three points. Haiti will probably feel hard done by the referees in the tournament, their first goal allowed to Honduras comes to mind, but they were certainly not the better team on the field against El Salvador today.

Trinidad and Tobago will face Mexico in their quarterfinal match from Atlanta. Honduras will face the runner up of Group C, either the USA or Costa Rica from Baltimore and El Salvador must wait and see who will join them as a third place qualifier before they learn their opponent, but likely it will be Panama in Atlanta.