The United States desperately needed a win and they delivered and redeemed themselves of an opening Copa America loss to Colombia.

Share All sharing options for: United States 4, Costa Rica 0 - Four Thoughts On A Four Goal Win For The USMNT

After a miserable start to Copa America 2016, the United States showed up in a big way as they defeated regional rivals Costa Rica 4-0 in Group A play from Soldier Field in Chicago tonight.

The win puts the United States back on track to advance to the knockout stages, and while a win against Paraguay on Saturday would absolutely send the US into the quarters, based on results tonight a draw might be good enough.

But before we get to far ahead of ourselves, we should discuss the big moments in the match. Bobby Wood drew an early penalty after taking a silly, two-handed shove in the back and Clint Dempsey converted to give the US the lead in the 9th minute. Then a late flurry at the end of the first half saw the US score twice in a five minutes span, with Jermaine Jones sending a low shot into the far corner of the net and Bobby Wood turning inside the area and beating Patrick Pemberton at the near post.

Substitute Graham Zusi added a fourth late in the game with a solo effort in the 87th minute capping of a long run and excellent afternoon for the United States. Since the US score four goals, you're getting four thoughts about this one.

1. This is why you play Bobby Wood centrally...(and players in their natural positions.)

I'm going to just assume that the number of people who can do this in the USA player pool is not many. We'll get to Pemberton's keeping in a second, but there aren't a lot of US players, let alone strikers, who can operate in close quarters like Wood did there. For a team that has trouble generating shots from open play at times, Wood might be the best guy to create his own shot on the team right now.

And that's saying something because it's not like Clint Dempsey's on the subs bench, he's Wood's strike partner/target man. I love Deuce, and he had two assists today (one to Jones largely unintentional) but he's far better as a creator than he is a target / central striker. It's very important to get Wood into good areas like he did here so he can take more shots or create space for others.

Gyasi Zardes is struggling out wide and with options like Zusi, Darlington Nagbe and Christian Pulisic available (even Fabian Johnson might be a little bored right now) I'd have no problem with Dempsey logging minutes out on the wing if it means getting Wood into the middle and capitalizing on the best lone striker, and possibly best striker period, the US have available right now.

2. The Defense is actually really good.

No, I'm serious, think about this:

Bradley & CBs have been discreet? That’s what you want if your the USMNT! CBs & DMs don’t stand out it means you’re doing something right.

Yeah, for as bad as the USA was against Colombia, the didn't give up that many chances. ESPN's Paul Carr says the US defense kept both their Copa America opponents, Colombia and Costa Rica, to under 1 expected goal per game.

Factor in that both goals the US conceded in the first game came off of a corner and a set piece, and the US backline has kept a 180-minute open play shutout streak in Copa. Certainly something to think about as the tournament enters the knockout stages and the US advances.

Bradley & CBs have been discreet? That’s what you want if your the USMNT! CBs & DMs don’t stand out it means you’re doing something right.

Also, Hercules Gomez is going to be one heck of a broadcaster when he retires and I agree with him here. Because while I love Michael Bradley, John Brooks and Geoff Cameron, the fact that they didn't have to do much today is a very good thing for the US. It means they were possessing the ball upfield, not giving the ball away or scrambling and making emergency defensive plays. Brad Guzan was solid when called upon and didn't give up any rebounds and DeAndre Yedlin continues to impress as a defender. 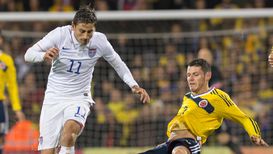 Don't miss out on our Group A primer with all the info, rosters, TV schedules and more for Colombia, Costa Rica, Paraguay and the United States.

Which is a tremendous shame because I want to see the goalkeeper who just won the UEFA Champions League playing soccer. More importantly, Patrick "The Eternal Statue" Pemberton is the guy in that Bobby Wood goal above getting beat on his near post while putting a full hand on the ball. As wonderful as that turn and shot is by Wood, I'd have to think that Navas saves that more often than not.

I often joke with a couple of old high school keepers/teammates of mine that you can't get beat at the neat post, basically ever. While Costa Rica might've been a trainwreck after the penalty they gave away early, one would have to think that Navas' skills as a shot stopper but also communicating with his defense could've helped Costa Rica tonight.

4. No, This Win Doesn't Justify The Colombia Loss

Yes, Jurgen Klinsmann stuck with the same lineup for maybe the second or third time ever and while he can say all he wants that the US played pretty well against Colombia last week, the eye test says otherwise.

JK: we didn't play as fluid as we did against Colombia but we scored the goals (tonight) #USMNT #CA2016

Klinsmann can say whatever coach speak he wants about style of play and passing, but against Colombia the US was predictable, reactive and slow and they lost, deservedly, against a team that didn't even have to try that hard to win. The US gave up two easy set piece chances and never found their way back into the game. Costa Rica did something similarly today, starting well, giving up a goal (on a penalty) and completely lost the energy and momentum they earned at the beginning of the game.

Against Costa Rica the US were the ones controlling the game, forcing Costa Rica to react to what the Americans were doing on the attack and you saw it in the goals, specifically the Wood and Zusi goals. Wood found space between the lines and was able to get off a shot while Zusi attacked the defense, got a lovely dummy run from Chris Wondolowski to occupy the defense and finished the play himself. These weren't the kinds of plays the US were generating consistently against Colombia and the scoreline of the two games reflects that.

The Ticos subbing of Joel Campbell was also a sign of surrender and you can't tell me other wise. Costa Rica knew the game situation and they'll need a win against Colombia and probably some help to advance to the quarters now. They were playing for that final game and Jurgen Klinsmann finally did so with his substitutions though I'd have made them sooner, he did give Wood, Dempsey and Bedoya some rest.

Klinsmann deserves credit for adopting the 4-3-3 that worked in the first half and in the friendlies leading up to this tournament. He stuck with his guns for today's game against a familiar opponent and it worked. Paraguay on Saturday in Philadelphia is another story.