Argentina scored twice in the span of eight minutes to beat Chile and Panama scored in the final minutes to top Bolivia.

Some might argue that the Copa America Centenario got off to a slow start. Argentina will say that they should've have been drawn into the last game of the first cycle of group games. And Lionel Messi didn't even play.

Angel Di Maria and Ever Banega both scored in the second half to give Argentina a 2-0 win over Chile at Levi's Stadium in Santa Clara, California.

The first half was fairly even, as the two teams traded good scoring chances with Argentina's Nicolas Gaitan looping a header off the top of the crossbar in the 2nd minute and Chile's Arturo Vidal forcing a reaction save from keeper Sergio Romero. 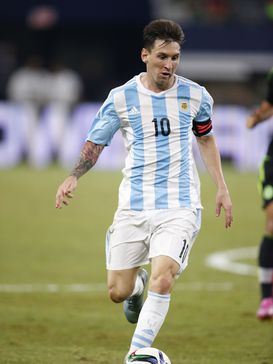 Don't miss out on our Group D Primer covering all the information you need to know for Argentina, Bolivia, Chile and Panama

With the score even at halftime, Argentina was the side to break the deadlock when Banega fed Di Maria on the left wing and the striker fired home past Chilean keeper Claudio Bravo at the near post in the 51st. Not ten minutes later, it was Di Maria's turn to return the favor, setting up Banega who doubled Argentina's lead after his shot took a deflection and beat Bravo at the same post.

Substitute Jose Fuenzalida scored a consolation goal when he headed home an Orellana cross with virtually the last "kick" of the game. It was a deserved goal for Chile who played well in stretches but a goal too late to affect the outcome of the match with Argentina in control most of the second half.

To close out the game, Argentina subbed on Sergio Aguero and Erik Lamela for Gonzalo Higuain and Di Maria respectively in final 15 minutes or so, making it fairly noticeable the depth of talent on the roster for the top ranked team in the FIFA rankings.

Chile actually would end the match with more shots on goal by a 6-5 margin, though Argentina took far more shots in the match with 17 compared to Chile's 9. With Argentina in a 23-year Copa America drought, they've started their campaign with a solid win and sit atop the Group D standings.

Blas Perez might be scoring goals at the 200th edition of Copa America and it would surprise no one.

The big Panamanian striker scored twice to lead his country to it's first ever win during their first appearance in the prestigious tournament as Panama's late winner game them all three points over Bolivia.

It was Perez in the 11th minute who opened the scoring with a sliding volley that sent the ball into the far post. This goal would be cancelled out early in the second half when Juan Carlos Arce of Venezuela would smash home the equalizer when a poorly cleared free kick fell to him near the six yard box.

Venezuela's efforts to maintain the scoreline were undone in the closing minutes, as Abdiel Arroyo centered a pass from the right side to Perez who coolly slotted home the winner with Venezuelan keeper Carlos Lampe scrambling to close down the angle on Arroyo.

For Perez, his two goals were the 40th and 41st of his career and now sits just one behind teammate Luis Tejada for the most goals in Panamanian history.