After three days of mostly pedestrian soccer matches, Mexico-Uruguay lived up to the hype in all it's glorious chaos and splendor.

Mexico started the game brightly, as Andres Guardado fired in a cross looking for Hector Herrera streaking towards the goal. However the cross would find Uruguay defender Alvaro Pereira, and his header would find the back of his own net in the 4th minute for the fasted own goal in tournament history. 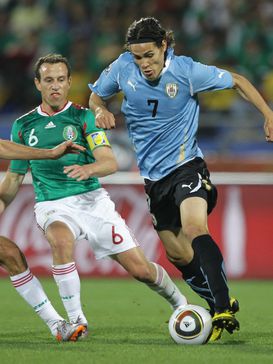 Don't miss out on our Group C preview, TV schedules and team info that we compiled for Jamaica, Mexico, Venezuela and Uruguay.

Edinson Cavani would force Mexico keeper Alfredo Talavera into action at the half hour mark though El Tri's defense was able to clear the danger for a corner. In the 36th, Nestor Araujo latched on to a cross from Miguel Layun only to have his header saved by Uruguay's Fernando Muslera. Mexico would end up with a wide possession edge in the first half, and a 5-2 edge in total shots with a 2-1 margin for shots on target.

The first half would go from bad to worse for Uruguay right before halftime when midfielder Matias Vecino was sent off with his second yellow card. Already booked in the 27th minute, Vecino upended Jesus Corona with a late challenge and referee Enrique Caceres of Paraguay dismissed Vecino from the game.

While the second half went back and forth for a while despite Uruguay playing with ten men, Mexico's one man advantage would end in the 73rd minute. Guardado, sitting on a yellow since the 25th minute committed a tactical foul when he brought down Uruguay's Carlos Sanchez. La Celeste would take advantage immediately, when on the ensuing free kick scored directly from the set piece, lashing a shot into the upper far corner past Talavera.

With the game tied and now both teams reduced to ten players, Juan Carlos Osorio removed star striker Javier Hernandez for Raul Jimenez in the 83rd, a substitution that would prove vital in the closing minutes. Following a scramble on a corner kick, centerback Rafa Marquez fired home to give Mexico the lead again.

Rafa Marquez's first goal for #ElTri since scoring vs Croatia at the 2014 WC gives Mexico a late lead! #MEXvURU https://t.co/XUtTrENHpd

While Uruguay vehemently protested a decision leading up to the Marquez goal, perhaps whether or not the ball should have been out for a goal kick, Mexico would strike again. Late in stoppage time Jimenez found Hector Herrera for the insurance goal and El Tri capped off a thrilling match and a 3-1 victory. Uruguay players including Cavani and Muslera were restrained by teammates after the final whistle as both continued to argue with the referee crew.

The win puts Mexico firmly in control of Group C with matches against Jamaica and Venezuela still remaining.

For the second straight Copa America, Venezuela opened the group stage with a 1-0 win, this time defeating CONCACAF opponents Jamaica and giving both Venezuela and Mexico three points atop the Group C standings.

Striker Josef Martinez slotted home the only goal of the game in the 15th minute following a turnover from Jamaica in their own half. After some brilliant short range passing, Martinez received the ball from Alejandro Guerra and slotted home underneath onrushing Jamaican keeper Andre Blake.

New England Revolution defender Je-Vaughn Watson had two of the Reggae Boyz best chances, including a header off the bar minutes before the Venezuela goal. Jamaica played the final sixty-seven minutes down a man after Rodolph Austin was sent off for a straight red in the 23rd minute. Austin cleared a ball at full stretch, but on his follow through planted his studs on the back off an opponent's leg and was dismissed.

Group C returns to action on Thursday June 9th when Uruguay plays Venezuela in Philadelphia, Pa. at Lincoln Financial Field while an all-CONCACAF affair between Mexico and Jamaica will take place in the Rose Bowl at Pasadena, Ca.