Everything you need to know about the teams in Group A for this year's Copa America Centenario.

Player You Should Know - James Rodriguez, MID, Real Madrid (ESP) - The club captain was a breakout star at the last World Cup and while he is a regular contributor with Real Madrid, he was more of a part time player after dealing with a muscle tear back in September of 2015. Even if he's not contributing for his big club, he's been a force on the international stage.

Player To Watch - Carlos Bacca, FOR, AC Milan (ITA) - If Rodriguez is the driving force behind Colombia's recent surge, then Bacca might be the anchor. Bacca and veteran Dayro Moreno lead the striker corps but they're also paving the way for two youngsters in Roger Martinez and Marlos Moreno. With Radamel Falcao not here, it's going to be Rodriguez finding these guys, mainly Bacca up top, to finish goals.

The Cafeteros have to be considered one of the favorites, not just of Group A, but of the entire tournament. Pekerman has led this team back from nearly two decades of international irrelevance and boy can these guys play. They were disappointing Copa America last year, scoring only once in a win against Brazil and then losing to Argentina on penalties. But their 2014 World Cup run, losing to hosts Brazil in rather controversial fashion in the quarters, is the best thing to happen soccer wise in Colombia since they lifted Copa America as hosts back in 2001. If you're looking for a non-traditional South American power team to root for, you've found them.

Player You Should Know - Bryan Ruiz, FOR, Sporting CP (POR) - There's a number of really good attackers we can also mention here, including Joel Campbell of Arsenal and Celso Borges of Deportivo La Coruna in Spain. But Ruiz, like Rodriguez of Colombia, is going to be the key man, creating chances for himself and others. This is a dangerous team going forward and it will take a team effort to slow down the Ticos.

Player To Watch - GK Patrick Pemberton, Alajuelense (CRC) - Basically this section would've been reserved for Real Madrid's Keylor Navas who just won the UEFA Champions League. But he's out with injury and that almost single handedly takes Costa Rica down a peg. Pemberton might be a fine backup with 28 international caps, but he's not Navas, and there's a big difference between the UCL and the CCL.

Losing Navas to an injury right before the start of the tournament is a big deal. With Navas, Costa Rica are a legitimate darkhorse, not just to win Group A, but to win Copa America. Without Navas, they're still good, but it was their keeper's heroics that lead the Ticos to a 2014 World Cup quarterfinal. This is a team that is probably going to give up a lot of chances, and Navas won't be there to save them this time. Can this team still make a run? Absolutely, but not their defense is going to have to work extra hard knowing their world class shot stopper isn't going to bail them out.

Player You Should Know - Paulo da Silva, DEF, Toluca (MEX) - Besides keeper Justo Villar, there's no one else on this roster with over 100 international caps, and only striker Nelson Valdez is even remotely close with 75. This is a fairly young team that is going to need to lean on what experience it has, and da Silva is it.

Player to Watch - Nelson Valdez, FOR, Seattle Sounders (MLS) - No, this isn't a homer pick, not entirely. The whole of Paraguay's midfield has 53 appearances and 1 goal. Valdez has 75 and 13 and fellow striker Edgar Benitez has 52 and 8. Valdez might be a Designated Player for the Sounders, but even he's not featuring for the struggling MLS giants at the moment. Perhaps a solid performance here can help his form at club level too.

Paraguay have fallen on pretty hard times after two decades of playing really good soccer and being World Cup regulars. Despite a dreadful 2014 World Cup qualifying campaign where they finished last on points with Bolivia, Paraguay have still shown well at the last two Copa America's reaching the finals and semifinals respectively in 2011 and 2015. There are no easy outs in the this group, and while Paraguay haven't been winning a lot of games in the last two years (3 wins against Jamaica, Bolivia and Venezuela in 17 int'l games), they have tied Brazil and Argentina in World Cup qualifiers. They might not be primed for another deep run into the knockout stages, but Paraguay is going to make life very difficult for the rest of the group. 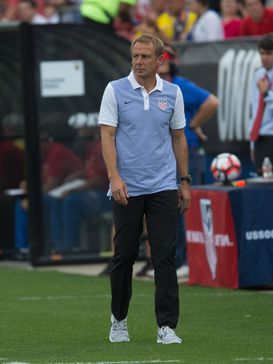 Player You Should Know - Michael Bradley, MID, Toronto FC (MLS) - Okay, most of you should already know the full USA roster, but for people less familiar with the Yanks, remember the big bald guy wearing #4. Bradley is best deployed as a deep midfielder, something his coach discovered only recently, but that's bad news for the rest of tournament. With Bradley doing everything from the midfield on both sides of the ball the US can be a force that can play with anyone in the world.

Player To Watch - Bobby Wood, FOR, Hamburger SV (GER) - The talented striker was a force in Germany's second division earning a move to Bundesliga side Hamburg only recently. But with regular strikers Jozy Altidore and Aron Johannsson out with injury, it's a huge opportunity for Wood to maintain his club form and have a breakout tournament this summer.

The USMNT has generally been a boom or bust team under Jurgen Klinsmann, and everyone is aware of the lows the national team has had in recent years and numerous dreadful displays bailed out by late heroics. But a three game friendly winning streak combined with the play of newcomers Darlington Nagbe and wonderkid Christian Pulisic have given the USA a surprising confidence going into this tournament. Nagbe and Pulisic might be coming off the bench, but very rarely has the US been in a position to have impact subs like those two for late in games. There's still questions about the defense, but if the offense is humming this could be a very good summer for the hosts.

GROUP SCHEDULE (all times US Eastern)

I really, really want to predict something other than "chalk" for this group, but I'm not sure I can. Two weeks ago I debated treason with the idea that the US could've honestly been the third best team in the group behind Costa Rica and a group stage exit was very likely. Now, with the US riding high and Keylor Navas not walking through that door, a version of chalk seems very appropriate for this group.

There will be good soccer played in this group but in the end I think the "Group of Death" will live up to it's billing but there will be draws. Possibly lots of draws. Colombia should win the group comfortably and go undefeated and I'll even go with the USA posting 5 points in a 1-0-2 record and also going undefeated. But for Costa Rica and Paraguay, they can do enough to compete but I'm not sure they have enough to win games if the US and Colombia are in good form.