How To Watch: United States vs. Colombia, Third Place Game

Can the USA secure a spot on the Copa America Centenario podium or will Colombia prove their first win wasn't a fluke?

Share All sharing options for: How To Watch: United States vs. Colombia, Third Place Game

The United States and Colombia will play for third place at the 2016 Copa America tournament tonight in Glendale, AZ, at University of Phoenix Stadium at 8PM EST. 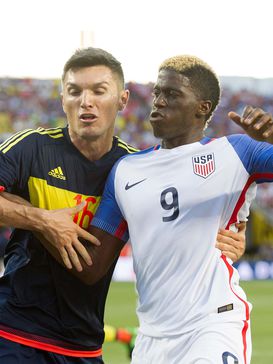 Jurgen Klinsmann might opt to play his first choice team in this game, which is fine, but that also means needing to get a first choice performance as well.

The two sides played each other in their Group A opening match, with Colombia winning 2-0 though the US would top the group by winning their next two games against Costa Rica and Paraguay. After defeating Ecuador in the quarterfinals, the USA fell to Argentina 4-0 in the semifinals while Colombia lost a rain-delayed match to Chile 2-0 after beating Peru on penalties earlier in the knockout stages.

The USA will look to build on an overall successful tournament despite the forgetful performance in the semis with three starters out due to suspension. Colombia also has many positives to take from the tournament as their recent international resurgence continues but it's fairly clear that the two finalists, Argentina and Chile, are just at a different level right now.

For the USMNT, one of the many positives will be their new 4-3-3 formation which served them very well in this tournament. With a new midfield alignment of Jermaine Jones and Alejandro Bedoya in front of Michael Bradley the US were able to put together several solid performances and most importantly, executed effective tactical gameplans from this formation. While an attacking trio of Clint Dempsey, Bobby Wood and Gyasi Zardes don't seem to fit in their respective roles as center forward and wingers, the three Americans made it work, especially in a 4-0 demolition of Costa Rica in the group stages.

The US backline has also done fairly well, with John Brooks continuing his breakout season next to Geoff Cameron at centerback. Fullback DeAndre Yedlin had some interesting moments with a penalty giveaway to Colombia in their first meeting and a red card against Paraguay but has overall been solid. Fabian Johnson hasn't gotten as involved in the attack as many would have hoped but his consistency in the backline can't go unnoticed.

They'll be up against a solid group from Colombia led by James Rodriguez though it might be striker Carlos Bacca that will give the US backline fits. Can the USA end their Copa America tournament with a big win over a top FIFA ranked team? We'll find out later tonight.