Jurgen Klinsmann and the USMNT are playing some good soccer going into Copa America. So a goal of the semifinals is not only realistic, but also very attainable.

I have long been a critic of one Jurgen Klinsmann. His starting lineups often put half the team out of position, his teams often look unprepared for matches and sometimes even his roster selection makes no sense.

However, despite these shortcomings, Klinsmann has guided the United States to some very incredible highs, including the 2013 Gold Cup and the knockout stages of the 2014 World Cup. But there have also been some incredible lows as well, semifinal loss to Jamaica in the 2015 Gold Cup and a qualifying loss at Guatemala have only increased the scrutiny on Klinsmann's ability to lead the national team.

Now, there are many aspects that go into being a national team coach, or a head coach in general. I think Klinsmann is a wonderful recruiter and a solid judge of talent, both of which are assets to the national team in some capacity. These skills are sadly the two that the least impact in on-field results but Klinsmann has built a really solid player pool over the last few years adding many dual nationals.

But there's still part of me that dislikes the whole head coach/technical director designation. And this was long before my beloved Philadelphia Eagles gave general manager duties to Chip Kelly, and well, I shouldn't get into details but you know what happened there. At times I feel like Klinsmann the technical director is failing Klinsmann the head coach. First and foremost, the head coach of a national team main focus/job is, or should be, to get results. Player development and other things happen more at a club level now, at least for full professionals, so once the players are out of the youth setup in the US, results should matter first for the national team. 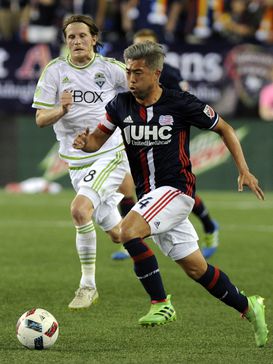 Lee Nguyen and New England Revolution fans are disappointed the midfielder won't be playing in the Centenario tournament, but head coach Jay Heaps says his player is still motivated.

And Klinsmann's results have honestly been mixed. Yes he's won a Gold Cup as Mexico self destructed three years ago but the USA has simply done things that never happened under predecessors Bruce Arena or Bob Bradley. For the second Olympics in a row, the U-23 team failed to qualify and while I think that's more to do with the CONCACAF qualifying setup (lose a knockout semifinal and your basically out), it's still not an excuse for not making the Olympics. World Cup qualifying has always been an interesting affair under Klinsmann, with the US struggling in both semifinal rounds and the early part of The Hex in 2013 before finishing atop the standings heading into Brazil.

So why then am I strangely confident about Copa America Centenario? The 2016 edition of the tournament is being played in the USA, and while many will scream "cash grab" I'm actually hoping that this full edition of "The America's Cup" continues past 2016 and can actually compete with the European Championship in the future. Playing more games against tougher CONEMBOL competition in actual tournament settings will help not only the USA, but all of CONCACAF in the long run.

I shouldn't get my hopes up just yet. I should see how this first tournament goes because the United States has an absolutely brutal draw in Group A with Colombia, Costa Rica and Paraguay. Yet, Klinsmann himself has come out and said that he wants to make the semifinals.

Here's the thing. That's a very reasonable and accurate goal for this United States team. You're hosting the tournament and will have the home crowd, but are also ranked below six CONEMBOL teams and Mexico. So would a semifinals berth be overachieving? Probably not, but a date with either the winner or runner of Group B awaits the USA in the quarterfinals, that means likely either Brazil or Ecuador. I'm aware that the US just beat Ecuador in a friendly and the 1-0 scoreline did not do justice to the victors second half performance, however, in an actual non-friendly scenario, getting a win might not be as simple.

To top Group A the US is going to have to start the tournament tomorrow against Colombia with a result, and probably a win, to set themselves up in the quarters with the Group B runner up. Could Haiti or Peru in theory sneak into the knockout round? Sure they could, but that would mean a Top 15 team in the world failing very miserably in the process and I don't think I can bank on good fortune getting the USA all the way to the semis. They're going to have to earn it.

Which is completely fine, in fact I prefer it that way. Advancing to the knockout stages of a major tournament is no small accomplishment, no matter how it happens. Yes, the US used the backdoor in 2002 and in 2014 in the World Cup, losing their final group matches but advancing anyway but their earlier results still put them in a position where they could advance by winning themselves or on other results. In this particular tournament, I don't think the US will be in a position to luck out on the final group day.

If the US doesn't get a result tomorrow against Colombia in Santa Clara, CA, then they basically need to win twice against teams they should beat. Costa Rica is a good team, but with out Keylor Navas in net they go from a legitimate darkhorse to win the tournament to a spoiler. Paraguay has not been in good form, but while they haven't been racking up wins in CONEMBOL World Cup qualifying, they're still a tough out and have tied Brazil and Argentina at home this cycle.

But as for Klinsmann's goal of reaching the semifinals, the easier path to do so would be winning Group A. The US has stared the Group of Death down in the 2014 World Cup and advanced on goal difference, but they were bounced in their first knockout game against Belgium. It's time for the US to prove they can do more than just get out of a tough group in a major tournament. It's time for them to prove they can win a knockout game, something they haven't done since beating Spain in the 2009 Confederations Cup and before that the 2002 World Cup against Mexico.

So yes, the USMNT have set a goal to make the semifinals. I think it's a good goal, it's not completely overachieving nor is it unrealistic and it doesn't put any extra pressure on the team if they miss out on the semis. What the semifinal goal does accomplish is build on the fact that US outside of CONCACAF simply doesn't win a lot of knockout games. That is a hump they need to get over if they want to make deep runs at the World Cup and this is their only opportunity with Mexico representing the region at next summer's Confederation's Cup in Russia.

Will meeting or missing this goal make or break my, or many others, opinions about Klinsmann has a head coach? Probably not, while finishing well at Copa America would be nice, you also have to be realistic as well. If the US has three solid performances in the group stage and then loses on penalties in the quarterfinals, it would be disappointing, but not some soul-crushing display like the US during the 2015 Gold Cup.

But Klinsmann is right about this tournament being a tremendous opportunity. The way the US plays during Centenario can set the tone for the USMNT for the rest of World Cup qualifying and the 2017 Gold Cup. It's important that the United States plays well.

And it would also be nice to play those extra two games by making the semifinals as well.